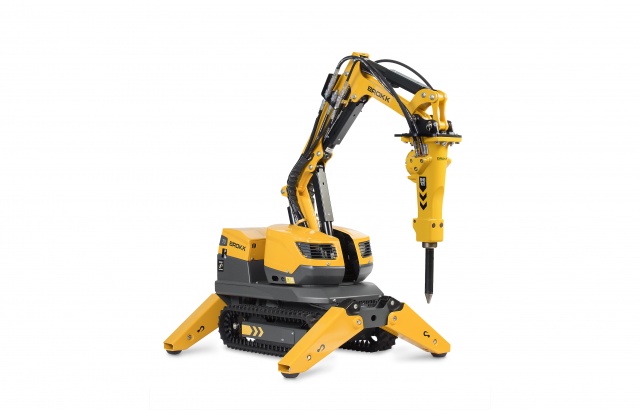 Brokk has introduced the Brokk 70 which follows last year’s introduction of four new models and extends the Brokk SmartPower line of machines.

The new Brokk 70 is a solution for bringing safe, mechanized and efficient demolition to confined spaces. Compared to its predecessor, the Brokk 70 packs more than 100% more demolition power, comes with the latest innovative Brokk SmartPower technology, as well as a powerful and fine-tuned hydraulic system.

The Brokk 70 is a testament to the technical advancements of Brokk over the last decade. It takes Brokk’s signature expertise in bringing power into a small package and to the smallest demolition robot in the world.

The Brokk SmartPower electric powertrain increases its power from 5.5kW to 9.8kW and enables the demolition robot to power twice the size of breaker as its predecessor. Taken together, this leads to a 100% increase in demolition power over its predecessor, the Brokk 60. The combination of Brokk SmartPower technology and Brokk’s upgraded hydraulic design leads to both smoother and more precise movements, making the machine smother and faster to operate than ever before. Furthermore, the more powerful hydraulics and completely redesigned mechanics of the machine enables it to carry and wield heavier and more powerful attachments.

The Brokk 70 comes with several brand new attachments, including the new Brokk BHB105 breaker which weighs in at over 100kg, and comes with advanced features such as water spray to suppress dust, and air cooling for hot environments. The new Brokk BDC40 drum cutter brings impressive cutting power to the smallest segment of demolition robots for the first time, whilst the new Brokk G32 demolition grapple is developed for more efficient soft demolition. At the same time the Brokk 70 keeps the same extremely compact dimensions as its predecessor. Its power and technology comes in a package that weighs only 560kg, fits through the narrowest doorways, and can be transported in an ordinary passenger elevator.