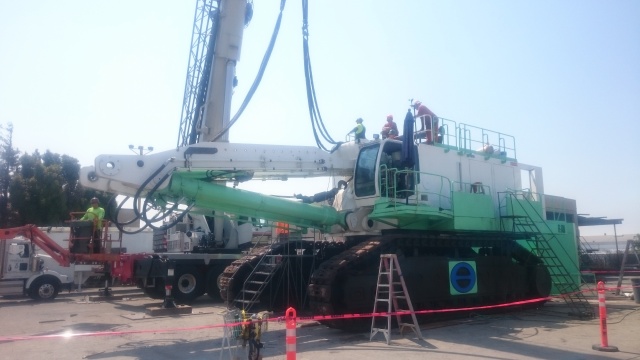 A battlefield report on heavy hitters

With the Covid-19 pandemic rewriting the rules of everyday life almost on a daily basis, news gets old very quickly. The world as we knew it seems to have ended, and we all have to deal with a new reality now. Demolition projects get suspended while construction equipment manufacturers convert their production lines to make ventilators for hospitals. That’s a global war all over again, although this time every nation is fighting a common invisible enemy. Fortunately, even a war cannot stop human progress. PDi’s Andrei Bushmarin reports on the latest developments in the excavator industry.

The Cat 352 UHD ultra high demolition excavator is specifically designed for the demolition of tall structures. The UHD front can be switched for a straight or bent (retrofit) boom position for regular demolition and earthmoving applications. The conversion can be performed by two personnel within 15 minutes, with no special tools required. The 352 UHD features a variable-gauge undercarriage and the Cat Active Stability Monitoring system, which continuously informs the operator of the tool’s position. In the UHD configuration, the excavator has a vertical reach of 28m and a horizontal one of 15.8m when operating a 3.7t attachment. These parameters allows for efficient demolition of eight-/nine-storey buildings. Equipped with a longer stick and a 3.08m3 bucket, the 352 UHD has a digging depth of 6,670mm and a maximum reach at ground level of 11,880mm. The machine is powered by a 408hp (304 kW) Cat C13 engine that meets the EU Stage V/U.S. EPA Tier 4 Final emissions standards. The C13 is also capable of operating on biodiesel up to B20. Three power modes permit the driver to match the excavator’s performance to the task at hand. When using the retrofit boom, the 352 UHD can benefit from the Cat GRADE with 2D grade control system, swing e-fencing and the Cat Payload on-board weighing system. The payload system can be used with VisionLink (online telematics interface) to remotely manage production targets via the machine’s Product Link (telematics system). The cab features a falling objects guard structure (FOGS) and includes front and roof laminated glass with a P5A impact rating. The cab can tilt up 30 degrees for optimum visibility. The windshield and roof glass come with one-piece parallel wipers with three intermittent settings with washer spray.

Doosan has launched the DX235DM - a precursor of the company’s new range of high-reach demolition excavators (two more models will follow later this year). Offering a 30-degree tilting angle and excellent visibility, the new machine is particularly suited to high-reach demolition tasks. The excavator’s highlights are a modular boom design and hydraulic lock mechanism on the machine. This allows operators to use the machine for other applications as well as demolition. Thanks to the innovative design, switching between a demolition boom and an earthmoving boom is fast and simple. A special stand is provided to facilitate the boom changing operation. A cylinder-based system helps push the locking pins into place. The multi-boom design also allows the earthmoving boom to be mounted in two different ways. Equipped with a 18m demolition boom, the DX235DM reaches a maximum height of 16m whereas with the digging boom in the straight configuration the DX235DM can work to a maximum height of 9m. The machine has a hydraulically adjustable undercarriage, which extends to a maximum width of 3.74m for excellent stability on demolition sites.

Hyundai Construction Equipment Europe (HCEE) is introducing the HX220AL - a new 22t Stage V-compliant crawler excavator. Described as a ‘game changer’, the HX220AL comes packed with cutting-edge functions and technologies. The Electric Positive Flow Control (EPFC) results in improved fuel efficiency and controllability. Auto Safety Lock prevents accidental start of the excavator, which improves safety. Eco guidance indicates ‘inefficient operation’ status to prevent unnecessary fuel consumption. Machine Guidance/Machine Control (MG/MC) indicates the work status and controls the attachment. The MG displays the position of the bucket tip. The MC that controls the grading with the bucket tip features an automatic stop function. Engine Connected Diagnostics (ECD) aids after-sales technicians and dealers by generating diagnostic reports on the engine’s performances. Machine Connected Diagnostics (MCD) enables the user to gather and analyse data on the machine’s overall performance. Peter Sebold, Product Specialist at HCEE, comments on the new model: “The HX220AL kicks off the introduction of our new A-series – a range of excavators with intelligent features that cater to the current demand for smart and environmentally-friendly yet robust and productive machines.”

Rusch is back with a bang!

Rusch – a Netherlands-based expert in crane boom repair and renowned excavator modifier – is back in the demolition game with its bespoke solutions. Rusch’s latest innovation was the RS 7500 ‘Quatro’ machine built around a Hitachi 1900 excavator a few years ago. Ferma Corporation - a US-based specialist demolition contractor - supplied the base machine whose track lengths had been pre-modified according to Rusch’s specifications. Following that the Rusch engineers designed the complete ‘Quatro’ boom with retrofit boom and subframe to fit the base machine. Originally intended for underwater operation, the RS 7500 had a reach of 28m with a 15t tool and 20m with a 25t one. In the high-reach mode, this giant reached 42m and 32m with 15t and 25t attachment respectively. All boom sections fitted on a flat rack for easy and inexpensive transportation. The excavator’s control system was also developed and installed by the Dutch company at the contractor’s headquarters near San Francisco. The control system was interlocked with Rusch’s in-house safety system that safeguarded the excavator against overturning. The customized machine’s ‘maiden project’ involved the demolition of a bridge foundation in Los Angeles.

in safety with its 1604ZWblue model

Germany-based ATLAS GmbH, a manufacturer of cranes and excavators with a century-long track record, has launched a new railroad excavator, which is said to set a new standard in the operator’s safety and comfort. The new 1604ZWblue model boasts a redesigned rigid axle with automatic switchable axle locks (RADL) – a special feature that results in improved safety and operational flexibility. The excavator’s rear axle can be fully locked utilizing an automatic differential lock system in the rail operation mode. When the rear axle is automatically locked by the switchable differential system, it is directly relieved of its load – which in turn means that the load distribution is balanced on both sides of the machine. The operational benefit is particularly evident when working "on transverse" tracks, because traction under load can be handled much more accurately and therefore with a much greater level of safety. In addition, the new ATLAS railroad excavators can drive over larger track twists in friction drive operation without the excavator losing traction.

When specialist demolition and recycling contractor Sauer Bau und Projektentwicklung GmbH, based in Starnberg, Germany, took delivery of a SENNEBOGEN 870 E excavator they based their choice on four main criteria. First off, the 117t machine has a reach of 20 to 33m when operating a demolition and sorting grapple. At the same time it is easy to control, which is essential when working in confined spaces. And, as of 2019, a version of the 870 E that reaches up to 36m is also available. Secondly, this model is a real multitasker when it comes to controlled demolition. It can dismantle sections of a building with a grapple, crush the removed material on the ground with a shear or a hammer, pre-sort it for the subsequent removal off the site. This is made possible thanks to the SENNEBOGEN optional quick-change system. Fuel efficiency and ease of assembly and transportation were Sauer Bau’s third consideration. The 870 E offers up to 20% in fuel savings due to the automatic stop and idle functions and the seamless match of the engine and hydraulic system. A sophisticated self-assembly system, which enables the installation of the counterbalance and the boom without using an extra crane, enables transportation of the machine in only three parts. Thanks to the compact telescopic undercarriage, the excavator’s main body easily fits on a flat rack. Last but definitely not least is the occupational safety factor. "The safety of my employees is my top priority," says Sauer Bau’s CEO Florian Trinkl. "We can confirm that the higher weight of the 870 E has a positive effect on its stability." In addition to stability, the excavator has other features that contribute to increased safety: a bulletproof windshield, the front and roof guards to protect from falling material, additional stick-mounted cameras for monitoring the work area and the 30° tiltable elevating cab. The machine comes with a pre-installed electronic monitoring system that prevents overturning.