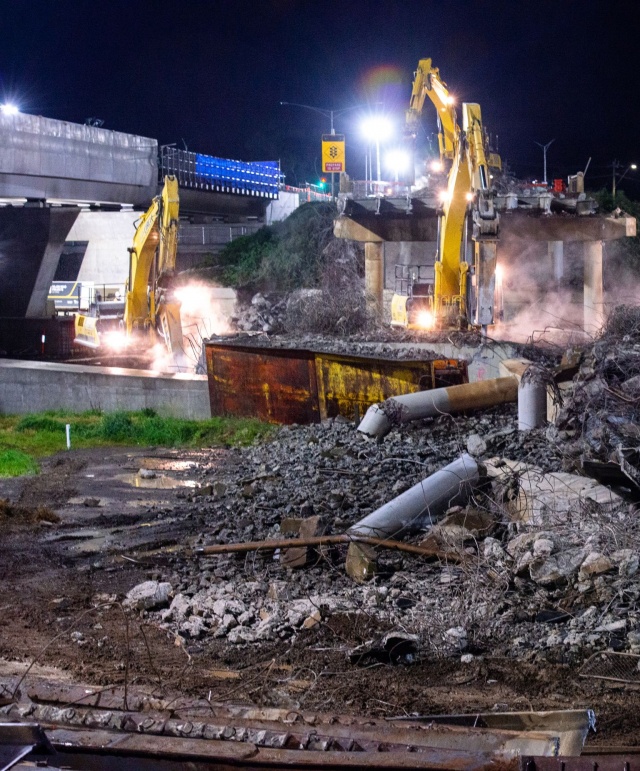 The Princes Freeway is a 160k Australian motorway that connects Melbourne to Geelong to the west, to Traralgon to the east, and is one of the main routes connecting Melbourne's western and eastern suburbs, being used daily by commuters and families, public and freight vehicles.

Its Duncan Road junction is a key route to and from many suburbs with its bridge, built 61 years ago, having a daily circulation of approximately 11,000 vehicles.

To improve traffic flow and road safety, the State of Victoria carried out upgrade work on the Duncan Road junction. The works included the construction of new exit ramps, the demolition of the old bridge and the construction of a new bridge with two lanes in both directions. Two new ramps were added for traffic to and from Geelong, as well as the construction of cycle and pedestrian paths and safe crossings on Duncan Road. To minimise traffic disruption, the old bridge had to be demolished in just one weekend, with the flyover being closed to traffic on Saturday 20 June in the evening and reopening on the Monday morning.

The works were carried out in record time by City Circle Demolition, a major and well-known Australian demolition company. A user of Indeco equipment since 2016, the company used a HP 5000 and two HP 7000 hammers for an important role in the demolition of the Duncan Road bridge and of the safety barrier pillars. The latter were constructed using high MPA concrete with extra steel reinforcements to withstand the impact of a truck of about 70t traveling at 100km/h. The end result is that the Indeco hammers proved to be a reliable partner for the demolition work.