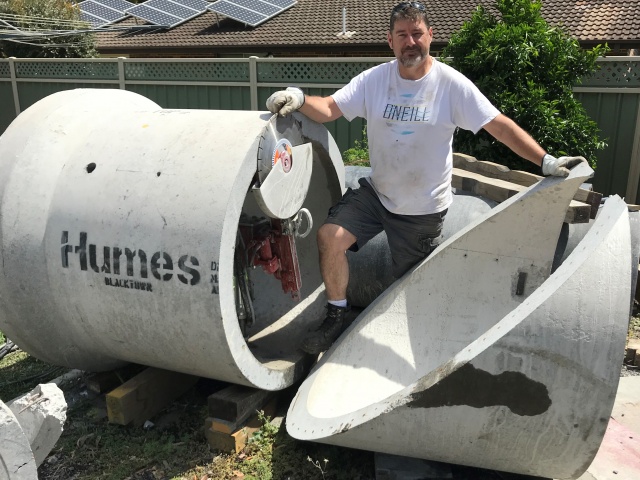 Paddy Brosnan, founder and director of Australian concrete cutting company, Extreme Cut Services, has developed an interesting innovation for cutting concrete pipes, which he claims is a ‘a real game changer’.

Anybody working in cutting concrete knows that pipe cutting is difficult and time consuming. Two years ago, Paddy Brosnan, founder and director of Australian based concrete cutting firm, Extreme Cut Services, was driving home from work and noticed hundreds of pipes by the side of the road where a new major road and sewer line was being constructed. Having cut these types of pipes before, he knew how labour intensive it would be for someone stuck in the trenches cutting these pipes. He thought there had to be a safer, quicker and easier way to cut pipes, and a better way of cutting angles.

A born problem solver, Paddy couldn’t drop the idea that there had to be a way of developing a safer, more efficient, automated and environmentally friendly way of cutting pipes. He did a lot of research to see what was already available and what demand there might be for something new. A two year journey began which saw the design and build of a working internal pipe saw prototype. In early November 2019, Paddy’s patent application number came through so he can now raise awareness about the saw’s features and beneﬁts. “It’s been a long time since I’ve seen innovation and automation in pipe cutting. I have used my 40 years of experience in mechanical engineering, as well as cutting and drilling, to produce an internal pipe saw that provides tangible beneﬁts for operators and project outcomes. The unique feature of my new internal pipe saw is its ability to cut pipes at any angle up to 45°. It is also highly versatile. By ﬁtting different diamond blades it can cut concrete, steel, ductile iron and refractory lined pipes. The one machine can do it all. This is a real game changer,” says Paddy. To date, Paddy has performed numerous successful tests on the working internal pipe saw prototype. The saw can be used in a variety of applications making it a highly attractive proposition for an equipment manufacturer. The potential industries that could use this saw include civil contractors, pipe layers, pipe manufacturers, piling demolition companies, concrete cutting companies, equipment rental companies and so forth.

Paddy is passionate about improving operator safety and in the next few years, he believes safety will be a major issue for concrete cutters. He knows a lot of people in the industry who had injuries from handsaws, the traditional way of cutting pipes. He believes removing the operator from the spinning blade will be a huge improvement in safety. Being remotely operated, the internal pipe saw will directly lead to a reduction in cutting injuries, manual handling injuries and direct exposure to toxic dust/mist which will ultimately reduce long term health issues. This is good news for business owners as this reduces their liability. Paddy is keen to reassure operators that the internal pipe saw is not designed to replace operators as it requires set-up and operation. However, the internal pipe saw makes the job safer, easier and quicker. If an operator can use a handsaw they will be able to easily operate the internal pipe saw.

In addition to cutting multi angles up to 45°, other key features of the internal pipe saw include its ability to cut pipes from 900mm up to 3.2m in diameter. It is also faster and more efficient, cutting pipes in just minutes. It is less labour intensive than handsaws as it allows cutting with one set up–there is no need to turn or reposition the pipe. It cuts clean and accurate first time so there is no need for grinding or patching rough edges. The internal pipe saw can even cut sub marine pipes and hollow piles below the silt line. The transportable modular system can ﬁt through a 600mm manhole. Designed to be versatile, a plasma cutter can be ﬁtted to cut metal pipes. Paddy is so confident in the internal pipe saws ability, he is currently working on a smaller model capable of cutting 450mm diameter pipes.

While Paddy believes that the new internal pipe saw will improve the industry it is not feasibly for him to go into production. Instead, he is seeking expressions of interest from equipment manufacturers around the world looking to acquire a new and innovative prototype, designed to ﬁll a gap in the pipe cutting market.