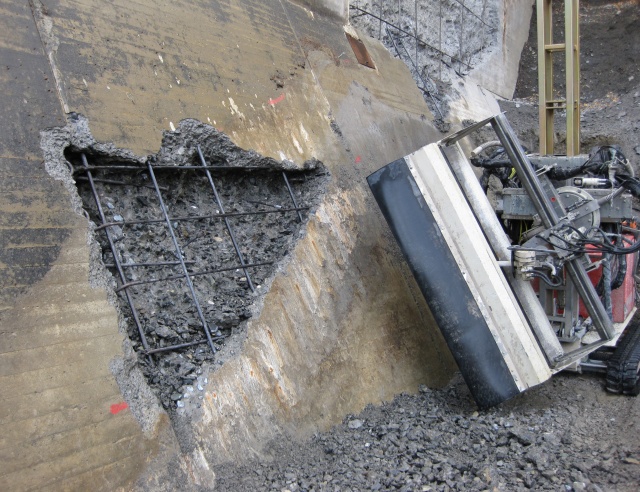 Pouring concrete is a complex process. One slight miscalculation on any of the numerous variables can spoil a whole batch. While concrete errors can certainly cause problems for timetables and budgets, advances in robotic concrete removal methods are making them easier to fix without demolishing and starting over. For large, multi-phase construction projects, hydrodemolition offers a fast, cost effective solution that can minimise the overall impact of concrete errors. There are five common concrete errors hydrodemolition can help solve:

Whether it’s a minor shift or a full on blowout, formwork failures can spell disaster in terms of lost productivity, since correcting it often relies on handheld equipment. There are several downsides to this approach. First, it’s slow, backbreaking work that takes a huge physical toll on crew members. Additionally, heavy vibrations damage rebar and leave micro cracks throughout the remaining concrete, which leaves contractors with no choice but to demolish most, if not all, of the structure.

Hydrodemolition is an impact free concrete removal method using high pressure water jets to blast away layers of concrete, cleaning and descaling rebar in the process. This method also eliminates the risk of micro fractures, creating a structurally sound foundation for any necessary concrete repairs. This high tech, robotic solution also minimises labour requirements to keep the job on schedule. For one contractor dealing with a formwork shift on a small overpass project, hydrodemolition provided an ideal solution. While part of the pour met specifications, the contractor needed to remove part of the deck and abutment to a depth of 0.9m and repour to correct the shift. Using hydrodemolition, the contractor was able to complete removal with minimal impact on the structure.

Concrete segregation and other batch problems

Another contractor relied on hydrodemolition’s selective removal capabilities to help solve a difficult concrete segregation problem. When water infiltrated the forms and washed out the cement paste, leaving just the aggregate behind, the contractor was able to set parameters for the hydrodemolition robot that removed just the segregated material. The sound concrete was left intact and ready for repair. Due to the lack of finesse found with breakers, as well as possible damage, breakers do not differentiate between segregated and sound concrete. In cases of obvious segregation, this might not be as much of a concern. But when removing poor quality concrete in close proximity to good concrete, it might result in contractors removing too much or too little material.

Hydrodemolition robots also allow contractors to adjust the robot’s stroke to control the depth of cuts and vary the pressure of the water jet depending on whether they are removing loose, deteriorated concrete or lowering the sound concrete to a pre-determined depth.  This enables accuracy in concrete segregation and bleeding situations. Once parameters are set, the robot manoeuvres over the designated area removing material according to set values. In some situations, this might include taking out everything to a specific depth. In others, it might involve demolishing only weak or deteriorated concrete by adjusting the hydrodemolition robot’s settings, such as stroke or flow.

Additionally, the hydrodemolition robot’s selective removal capabilities can provide a cost effective solution for other concrete mix problems. For example, during a recent bridge construction, delivery of a bad batch of concrete threatened to derail the entire project. The concrete was already setting as crews poured. Vibrating and other correctional methods were unsuccessful, and the concrete fell 350mm short, leaving a mesh of exposed rebar. The contractor used hydrodemolition to selectively remove the poor quality concrete without damaging rebar or the overall stability of the structure.

Sometimes the concrete error isn’t a result of the concrete mixture itself. In situations where off-spec materials such as rebar or anchors need to be removed from set concrete, hydrodemolition provides the power and precision necessary for fast, efficient removal. In addition to setting parameters for stroke and pressure, hydrodemolition robots can be programmed to cut geometric shapes, such as circles, triangles, squares or parallelograms. This allows contractors to remove just enough material to reach the imbedded item. One contractor discovered it needed to replace bolts on anchors imbedded 1m into the concrete. To reach that depth with a jackhammer would require a large hole, not to mention the resulting micro fractures and damage to rebar and anchor. The hydrodemolition robot enabled the cutting of circular holes just big enough to free the anchors. The contractor was able to correct 12 to 15 anchors in 12h using a hydrodemolition robot.

Hydrodemolition also provides an efficient solution for fixing concrete errors in existing structures. One contractor tasked with removing an over 2m thick concrete pier on an active construction site for a hydropower plant was able to remove 140m3 in just 53 days, averaging 4m3 in a 12h shift. Once the demolition was complete, the repoured concrete benefited from the superior bonding surface created by the hydrodemolition process. The main reason for this is the absence of micro fractures thanks to the impact free process. Hydrodemolition also provides a cleaner surface, which eliminates the need for additional steps, such as sandblasting after using a jackhammer. The hydrodemolition process also leaves behind a rough, irregular surface. These combined features create the perfect profile for superior bonding strength, resulting in repairs that can last up to three times longer.

Hydrodemolition is recognised as one of few methods capable of achieving Concrete Surface Profiles 3 through 10, making it a versatile option for surface preparation applications. For example, a contractor could tackle a concrete water tank where old coatings need to be removed and the surface roughened to apply new paint or epoxy. This might require a CSP 3. On a subsequent project, where a bridge pillar needs reinforcement, the same contactor might be asked to provide a CSP 8 for the application of new concrete. This wouldn’t be a challenge with a hydrodemolition robot.

Hydrodemolition is often the ideal solution for concrete fixes that require productivity and precision, such as when facing compressive strength failure. Once a failure has been identified, hydrodemolition allows contractors to quickly remove only the weak material without jeopardising the overall structural integrity of remaining concrete or damaging rebar. When removal is complete, a superior bonding surface that will provide a lasting correction is left.  Additionally, hydrodemolition robots are highly manoeuvrable, allowing contractors to tackle compressive strength failures wherever they occur.  Some manufacturers also offer additional equipment that extends the robot’s reach or allows for specialised removal applications such as around columns, inside tunnels or under water. Lightweight, highly adaptable models are also available for confined space applications.

Concrete errors can happen to anyone. Being ready with a fast, cost effective solution allows forward thinking contractors to maintain productivity in the face of unexpected delays.

Keith Armishaw is the business development manager for Aquajet’s North American subsidiary. He has more than 25 years of industry and leadership experience.