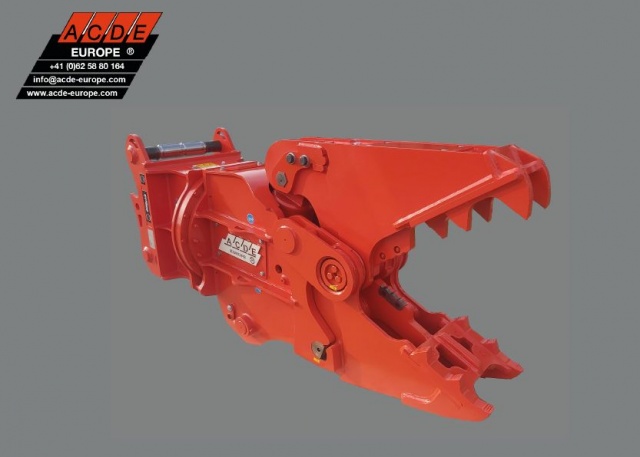 In 1994, Karel L Glaaser founded ACDE Europe, which after many years of operation as a marketing and sales company, has now announced the introduction of the Beilite Europe brand of Chinese hammers.

Glaaser was motivated to make this move due to discontent. “I've seen too many changes of management, and the changing qualities of my suppliers' products too often frustrated me. It was time to do better under my own brand name.” Glaaser’s move is in conjunction with other activities, forming three pillars of his operation. The ACDE Europe grapple series has an extensive selection of sorting grabs, multi grapples, log grapples, stone grapples up to 13t, and is established throughout Europe. Glaaser also markets a variety of shears for demolition and recycling. They are supplemented by magnets, compactors and screening buckets. The third main pillar is now the Beilite hammer series. “Beilite is a top brand in China, so why not here? For one year we've been testing the hammers under our brand name ACDE Europe in rental fleets. The customers were enthused by their power and reliability. Convinced by the quality, we decided to be the first one to introduce a Chinese product in Europe under its own brand name and not under an OEM name.”

Since 2003, Taizhou Beilite Machinery Ltd. in Wenling has built hydraulic hammers. This company has 370 employees and is one of the two largest hydraulic hammer manufacturers in China and the only own which only builds these machines. Beilite operates three plants, one of which was built only recently and is equipped with the latest production engineering technology. “The quality of a hydraulic hammer is substantially determined by the quality of the steel, by the hardening method and by the precision of the manufacturing. The Beilite plant is equipped with fully automatic hardening furnaces made in Germany and works with the old Krupps best practice hardening system. The computer controlled machine tools ensure highest manufacturing precision, which improves the hammer life span,” says Glaaser.

Beilite works with a network of specialist dealers in 60 locations in China and 21 partners abroad. The manufacturer is specialised in the production of large hammers over 5t in working weight. “Alone for the Chinese market, 15 of these giants are produced every day,” says Glaaser. For the European market, he has adapted the hammers to customers' requirements: “A sound suppressed housing based on the Henze system, automatic lubrication and the European hole pattern for the adaptor plates distinguish our Beilite Europe hammers from those for the Chinese market.”

The European hydraulic hammers are supported by ACDE Europe's first class service and decades of professional know how. “Our step was courageous, but perfectly right. ACDE Europe has been enhanced from a distributing organisation for external brands to an innovative manufacturer. With more than 30 years of experience with attachments we can serve customer's requests very precisely,” says Glaaser. “In the Netherlands, we operate a logistics centre which distributes our hammers and spare parts in Europe. In addition to our concentration on Benelux, Germany, Austria and Switzerland, we supply customers in all other European countries.”