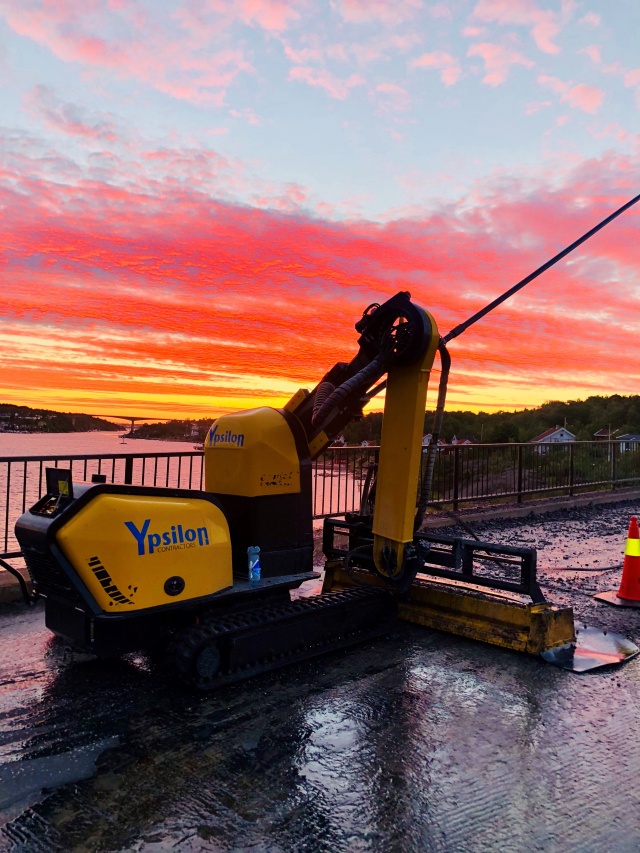 This year’s hydrodemolition feature is divided into corporate and product news. In the former category, Gulfstream Nordic Holdings AB has become majority owners of Conjet AB, whilst products wise, Aquajet Systems has introduced the Ergo Rotolance range of hydrodemolition attachments.

The hydrodemolition industry evolved during the 1980s with two manufacturers being considered the major international players, Conjet AB and Aquajet Systems AB. Since then, both hydrodemolition techniques and the business arena have undergone major developments. A couple of years ago, Brokk AB acquired Aquajet Systems AB and just a few weeks ago Gulfstream Nordic Holdings AB bought the majority of the shares in Conjet AB.

Gulfstream Nordic Holdings AB (GNH) has entered into an agreement to acquire a majority shareholding in Conjet AB, one of the world’s leading specialists in the design, development and manufacture of remotely operated, computer controlled hydrodemolition machinery. In 1990, the owners of Conjet AB acquired, through a management buyout, Atlas Copco’s Conjet project and have since then successfully developed the company into a leading player in the hydrodemolition market on a global basis. The Conjet team has over the last few years managed to combine high growth with the continuous introduction of highly advanced new robots to the market. Today, as a result of Conjet’s many years developing and improving the technology, hydrodemolition is now seen as by far the most efficient method for the repair and restoration of deteriorated concrete structures such as bridges, parking decks and dams (to mention just a few relevant areas).

Conjet’s owners came to a point where they identified a number of major issues to address, but also, and more importantly, saw the need for a partner with the ability to fuel and accelerate future growth. The purpose of bringing in GNH as joint owner is thus to strengthen management expertise in developing the global business as well as adding financial muscle enabling investment in a combination of organisational and product developments to support long term growth. GNH will also bring further access to the US market and facilitate expansion in North America through its existing network and presence. The existing management team and owners, with their extensive competence, will remain in the company and play an important role in the future, with Conjet remaining an independent company.

“We have more than doubled revenue in Conjet over the course of the last three to four years, and we have simultaneously been able to expand our business and improve our product offering to the highest level ever. We see great opportunities ahead in our markets based on our competent employees as well as our technology edge, ensuring the perfect match between our immediate customers and the projects they work on. We have had a constructive and positive dialogue with GNH and are looking forward to sharing their experience from similar situations in a partnership. Together we can realise Conjet’s potential in the coming years,” said Lars Nilsson executive vice president of Conjet.

“Conjet’s products and field expertise provide a much needed set of solutions to the aging infrastructure challenges faced by private owners and governments in North America. We are excited to partner with Conjet to increase accessibility to, and usage of, its cutting edge hydrodemolition machines in the US and abroad,” said Stephen Sistrunk, partner at GNH. “We will do our part to support the growth and generate an even stronger business by leveraging our experiences and strategic know how from other growth companies with global presence, focusing on investing in and systematising sales and strengthening processes and systems,” said Tomas Wängberg, partner at GNH. “We are confident about the great potential in Conjet and are extremely impressed with what the existing team has achieved over the years. The market for hydrodemolition is in our view very attractive and we believe Conjet is in a strong position to take advantage of this. We look forward to teaming up with current ownership to be a part of the continuous growth journey,” said Peter Ankerst, partner at GNH.

Newly launched by Aquajet is the ‘Rotolance’ series which effectively cleans, removes and roughens concrete, leaving a better bonding surface for new concrete or alternative materials. Contractors also can use the Ergo Rotolance attachments to remove rubber coatings, paint, rust, plastic and other material. As a hydrodemolition option for small scale scarification and removal projects, the Ergo Rotolance allows operators to increase service offerings safely and efficiently.  The Ergo Rotolance series is commonly used in maintenance and removal applications at airports, harbours, water treatment facilities, reservoirs and petrochemical plants. The series can handle water pressure between 100 to 3,000bar through specially designed patterns of nozzles. The attachments offer new versatility for the Ergo system and are compatible with the ‘Ergo Climber’ and ‘Ergo Spine’, providing access in confined or hard to reach places. As an alternative to sandblasting, the Ergo Rotolance series eliminates dust pollution and the need to dispose of contaminated sand.

The Ergo Rotolance 30 self-rotating tool has four nozzles and a 30mm spray pattern. It uses pressures up to 3,000bar to quickly and precisely remove a shallow layer of concrete, leaving a superior bonding surface. Contractors can use their own favourite hand gun tools on the Rotolance 30 thanks to a multi bracket system with an adjustable span of 14mm to 51mm, making it an ideal positioner. The Ergo Rotolance 130 and 130S work at pressures ranging from 100 to 3,000bar and leave a smooth surface when cleaning or removing hard paint, rust and rubber from areas such as airport runways. They feature up to eight nozzles for a 130mm spray pattern. A hydraulically driven swivel allows for precise control of rotation speed for even results. The 130S is also equipped with a suspension system, allowing it to follow uneven or curved surfaces such as ship hulls and storage tanks. In addition to a wider range of movement, the suspension mechanism has an ingenious design that allows the spring force to be adjusted in four steps and can, at the same time, lift the rotor head up from the surface to make assembly and inspection of the result easier.