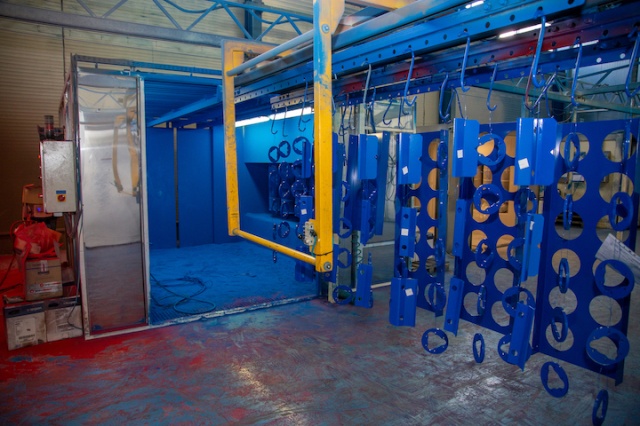 Poland has a long, rich and diverse history, full of struggle, internal turmoil and foreign betrayals.

The country has found itself stuck ‘between a rock and a hard place’ so many times that one can only wonder at the Poles’ undefeatable spirit. Having been literally rebuilt from the ashes after WWII, Poland’s capital Warsaw is a symbol of the country’s amazing resilience. Today Poland is a vibrant nation, with one of the fastest growing and diversified economies in Europe with a well-educated workforce and a strong private sector. That was why Blastrac – a Netherlands based trendsetter in surface preparation machinery – chose Poland as its global production base back in 2006. Andrei Bushmarin reports on his visit to Blastrac’s Polish facilities.

Golina and Zagórów are two small countryside towns in the vicinity of Poznan. There is little remarkable about these Podunk burgs, but they do have the strategic advantage of being situated next to the A2 – one of Poland’s most important thoroughfares that links Poznan and Warsaw. That, in no small part, impacted on Blastrac’s choice of locations for its manufacturing and logistics facilities. The ready availability of skilled manpower, particularly in the field of metalworking, was another reason behind the company's decision.

A ‘global manufacturing hub’ might sound a bit lofty for a small place like Golina, but the hub it truly is. The entire Blastrac range of machinery - shot blasters, grinders, scarifiers, floor scrapers, ride on multitask vehicles and dust collectors - are all produced at this 8,500m2 facility. Since its establishment in 2006, the factory has undergone two expansions: in 2013 and 2016 when 1,500m2 and 1,400m2 buildings were added respectively. All parts and components - frames, bodies, welded components, electric boxes, etc. - are manufactured at Golina from scratch. The plant is kitted out with all the latest equipment to ensure a full production cycle from raw materials to ready-made products. Laser cutting and CNC machines, bending presses, welding robots, shot blasting cabins and powder coating stations - in fact every piece of equipment a high end machine manufacturer might wish for is there. This also allows Blastrac to produce tailor made machines according to customers’ specific requirements.

The factory is run by Blaźej Szczęsny, a professional engineer in his mid 30s, who has been working for Blastrac Poland for 11 years now. Having started as an engineering contractor, Blaźej worked his way up to manager of the technical department firstly and then, a few years later, he became production manager. With over a decade of experience under his belt, he has got every aspect of the Blastrac manufacturing process down cold. Blaźej Szczęsny oversees staff of some125 persons that includes 35 trained welders and eight engineers responsible for research and development. The Golina plant works in two shifts, with annual production capacity varying as to the number of orders received. In 2018, it processed some 1,050t of steel (including 120t of the high quality manganese steel) and delivered some 110,000 man hours. With 5% growth projected for this year, lead times average at one week for standard products, whereas it takes about three to four weeks to deliver a customised machine.

Once all parts of a machine are fabricated, shot blasted and powder coated, they get shipped to the neighbouring Zagórów facility for assembly. This brand new 3,000m2 assembly and logistics centre was only commissioned in March this year. The facility sits on a 42,000m2 plot of land, which can be used for further expansion. Zagórów was chosen based on a number of merits which other nearby locations lack. First of all, it benefits from an extensive power grid, which is vital for a logistics hub. Secondly, a slew of technical colleges are scattered around it, providing Blastrac with a steady stream of young educated professionals. And last but not least, comes the aforementioned proximity to the A2 highway.

All standard Blastrac machines are assembled at Zagórów by a 20 person team led by Adam Kasznia, another Blastrac Poland veteran. Adam begun his career with the company 12 years ago working as a logistics manager at Golina, and once the Zagórów facility was launched, he was the obvious choice as its manager. At the moment Zagórów’s monthly capacity averages out at 150 standard machines. Some customised items also get pre-assembled there before shipping to Blastrac’s European headquarters in Nieuwegein, the Netherlands, for final assembly. The Zagórów centre ships out finished products to the entire Blastrac Group, which currently includes Blastrac Europe, Blastrac US and Blastrac Asia. There are new solutions in the making too: the heavy duty BMC-335ELITE floor shaver is expected to hit the market already in the coming weeks. It will be followed by the launch of the new BMP-335ELITE scarifier and an extension of the floor scraper line in early 2020.