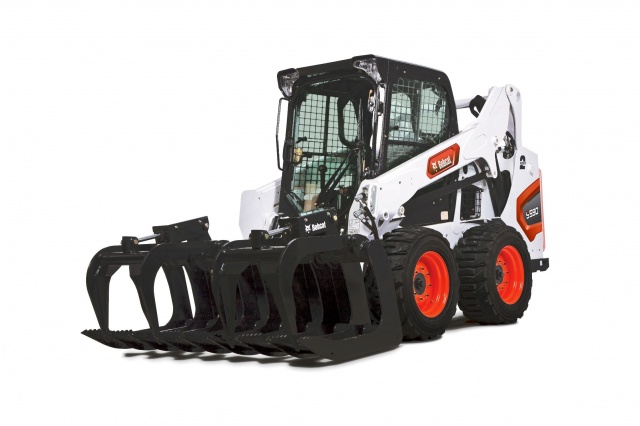 With the launch of the new S550 and S590 models, Bobcat has completed the company’s M-Series of Stage V compliant skid steer and compact track loaders.

In contrast to the previously launched M-Series models with Stage V engines, the new S550 and S590 have a number of advanced features as standard. These include selectable joystick controls for ease of operation, an ‘Attachment Control Device’ (ACD) for managing attachment functions from the joystick and a two speed drive that improves productivity and fuel efficiency. The new S550 and S590 skid steer loaders will be produced in the Bobcat plant in Dobris in the Czech Republic and are available to order with immediate effect for delivery early in 2021.

SJC and ACD as standard

One of the most important new standard features on the S550 and S590 is the previously optional Bobcat ‘Selectable Joystick Controls’ (SJC) system. Based on easy to use, low effort joysticks, the SJC system provides the operator with Bobcat exclusive features and fingertip switches. This automatically configures the loader as a tool carrier for working all day with the widest possible selection of attachments, as well as providing increased operator comfort and unmatched joystick control of the loader itself.  With the SJC system in place, the S550 and S590 now offer the ACD (‘Attachment Control Device’) system as standard. Using ‘Can-Bus’ communication to recognise the attachment on the machine, the ACD system automatically sets up the joystick controls and the output flow to ensure the best performance when using attachments on the new S550 and S590 loaders.

Another addition is High-Flow Hydraulics as standard on the S550 and S590 Stage V models. This further expands the exceptional versatility of these machines, allowing them to be used with advanced higher flow attachments such as sweepers, planers and wheel saws.  Jiri Karmazin, product manager for loaders at Bobcat, commented: “The new S550 and S590 models complete our M-Series Stage V loader range. By bringing together the next generation Stage V engine technology with features such as Bobcat SJC controls and High-Flow Hydraulics as standard, these models are ready configured as versatile tool carriers for use with an even wider range of Bobcat attachments.”

The next generation of Bobcat D24 engine (with Bosch fuel injection system) improves overall machine performance, providing a higher power output of 50.7kW and higher torque. The new engine technology results in lower fuel consumption for the same kind of work, while fulfilling the strictest Stage V emissions regulations. This ensures the S550 and S590 are ideal for use on the most demanding jobs. The next generation engine is equipped with diesel particulate filter (DPF) after treatment technology, which works automatically without any interaction needed during normal operation. The use of DPF technology allows the new loaders to be employed in emission regulated zones such as city centres.  In addition, the auto idle feature reduces the engine speed to low idle when the joysticks are in the neutral position and have not been used for about five seconds, ensuring quieter overall operation and reduced fuel consumption.

The next generation Bobcat engine has also allowed the company to extend maintenance intervals with the first service now being after 500h which also reduces the number of fuel filter replacements required. Both new loader models offer two speed operation as standard, which boosts the maximum travel speed from 11.4 km/h in low range to 17.3 km/h in high range to improve productivity and fuel efficiency. This can be combined with the hydraulic bucket positioning option, which keeps the loader bucket level as the lift arms travel upward, enabling operators to spill less and work faster. The engine also sees noise levels reduced for both bystanders and the operator. This can be combined with popular comfort features such as the ‘Heat Ventilation with Air Condition’ (HVAC) option, providing a more comfortable operator environment throughout the year and in all conditions.

The new Stage V loaders now feature the previously optional Deluxe control panel as standard, offering a choice of different languages and telematics to protect the machines and to monitor their performance.

The Deluxe panel also reduces the risk of misuse, thanks to the keyless start function and, if necessary, the operator can lock and password protect both the ‘high flow’ and two speed systems via the panel. A new DPF management menu provides easy management of the machine and exhaust after treatment system. Other features found include an optional ‘Cloth Suspension Seat’ that improves the operator’s comfort all year long and the ‘Auto Ride Control’ option that improves the operator’s comfort and the machine’s stability.

Finally the S550 and S590 are equipped as standard with ‘Versatile Duty Tyres’ with a bi-directional design for use on most common mixed surfaces, improving lifetime significantly. Industrial solid flex tyres are available as an option and are designed for intensive wear applications that have a higher risk of punctures.