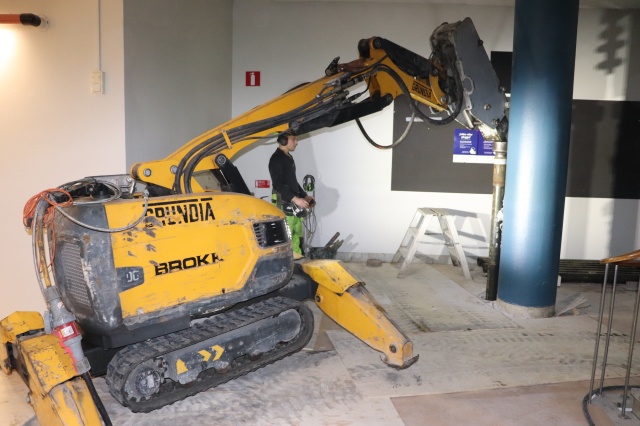 Brokk robots are designed and optimised for demolition, but they can also provide an efficient solution for pile foundation reinforcements.

Timber piles are common in European cities and they work well until exposure to oxygen causes them to rot. Soil conditions also have a major impact on the process, as does densification of cities. New buildings, road construction and landscaping near house facades can accelerate the timber piles’ deterioration, typically requiring additional reinforcement with new steel piles.

Given the above, it was not surprising that the rotting 50year old pile foundation of the historic Draken on Järntorget building in Gothenburg, Sweden, needed to be reinforced with new piles so that a major renovation and new hotel project could get underway. Richard Hammar, a supervisor with building reinforcement specialist Grundia AB, stated that the project had lasted about seven months and was now in its final stages. However, early in the planning process, several challenges emerged, which resulted in a demolition robot being the only alternative for the job. “Some areas in the building are confined and sometimes difficult to access, that’s when we began exploring the use of the Brokk robot,” Hammar says.

As the work was to be carried out in a basement, the robot needed to get through narrow passages less than 800mm wide, as well as travel up and down stairs. The Brokk 200 was seen as the most suitable model for the job, as it delivers maximum power in relation to its size, which was crucial as the task required the use of a large hydraulic breaker in a limited space. Another benefit with Brokk’s demolition robots is that they are remote controlled, giving the operator the opportunity to manoeuvre the robot from a safe distance enabling the best possible view of the work. Furthermore as the project was carried out entirely indoors, an electric powered machine was essential. The exhaust fumes from a diesel powered machine would have made the work environment unbearable.

The Brokk robot also offered a dimension of versatility through its ability to use different attachments; this was a key consideration given how soil conditions and the building’s overall condition dictated the tool necessary to carry out the work. For this project, a hydraulic breaker with a large diameter piston was needed, as well as a counterweight to ensure the robot’s stability within the confined space. A side mounted breaker solved all these problems making it possible to maintain a high working pace.

In total, Grundia AB laid more than 300 x 115mm diameter steel piles across the building’s 1,500m2 area. The average depth was about 41m, but varied between 17m and 70m. Due to changing ground conditions, some piles could be driven quickly, while others took several hours. For the deepest piles, the first 40m took about two hours, while the remaining distance took almost four hours. Overall, the Brokk 200 was in operation for 1,500h, time well invested to stabilise the building and allow the new project to go forward.