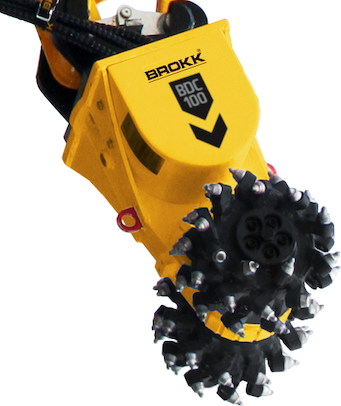 Brokk will introduce several new lines of attachments at bauma 2019. The new lines include a whole new range of Brokk drum cutters and an upgraded range of demolition grapples.

In addition, the full range of the recently announced Brokk hydraulic breakers and new Darda concrete crushers will be on display.

Brokk demolition robots are historically mostly associated with their core attachments such as hydraulic breakers and concrete crushers. However, as Brokk machines have become more technically advanced and market demand for mechanization has increased, demolition robots are increasingly used for a more varied range of applications requiring additional tools. “One of the key strengths of Brokk demolition robots is the capability to carry and efficiently use a wide range of different attachments. In fact, the robots we build today are increasing multi-purpose machines rather than purely demolition machines,” says Martin Krupicka, chief executive of Brokk. In order to meet this demand, Brokk has developed new attachments and upgraded its machines to work well with a wider range of tools.

In 2018, Brokk announced its own line of hydraulic breakers, with a range of eight high performance models for Brokk demolition robots. This range will be extended at bauma, and at the same time Brokk will introduce its own range of drum cutters, BDC (Brokk Drum Cutter). The range starts with the brand new BDC 40 for the smallest Brokk 60 model, BDC 50 and BDC 100 for the mid-range of Brokk robots, and BDC 250 for the biggest Brokk machines. This introduction represents the world’s first complete line of drum cutters that are designed and optimised specifically for use on demolition robots. They have been developed due to the increased use of Brokk machines in underground applications, and the use of Brokk machines to carry out more applications in the construction sector.

Brokk will introduce its upgraded line of demolition grapples at bauma, including the new G32 grapple designed for the most compact Brokk models. The new model features a wider grip of 320mm and an improved rotating function. Together with its larger sibling, the G50, Brokk has developed a unique solution for ‘soft demolition’, as when compared to standard grapples on the market, the design of Brokk’s G-series of demolition grapples is optimised for use on Brokk’s demolition robots.

Furthermore Brokk has invested in developing rock drill attachments for its machines. These are customised and fully integrated with the control and operation of the Brokk robots. Now the range has been extended with the powerful new TE 326 drill attachment used on the new Brokk 300 and Brokk 500 models. This creates a complete range of rock drills for Brokk machines, from the small TE160 used on the compact Brokk 110 to the powerful TE360 used on the largest Brokk machines.

Brokk demolition robots are increasingly becoming the Swiss army knife of the construction industry, being used for a wide variety of applications and tasks. With their flexible and compact design, their use is only limited by the availability of different types of attachments. For this reason, Brokk is focused on developing and extending its range of specialised attachments.