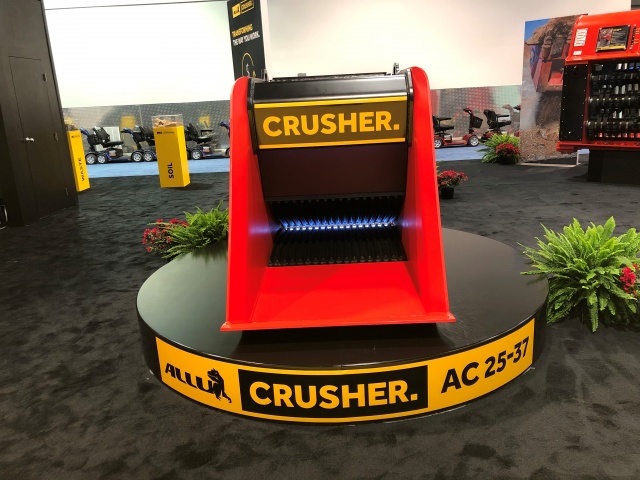 Business in Berlin at Fachtagung Abbruch 2020

This year, Europe’s largest industry event boasted a record attendance of more than 1,100 participants, 127 exhibitors and over 1,000m2 of exhibition space. PDi Magazine reports from Fachtagung Abbruch in Berlin.

The German Demolition Association’s annual conference provides German manufacturers and equipment dealers with a chance to network with fellow industry members and participate in topical lectures whilst enjoying an industry focused exhibition. The conference, with its familiar feel and tightly knit layout, provides attendees with the chance to come together, discuss potential deals and present new products.

“This event is very good, it’s very well organised,” said Martin Müller, production manager at Janser, when PDi went to Janser’s booth at the exhibition. Right behind him stood the company’s new ‘IonBox’ 1000, a 55kg 240W air ioniser which can handle volumes of up to 1,000m³.  Martin stressed that the conference and exhibition provides companies such as Janser with an opportunity to highlight new products to the whole German demolition industry. “All the professionals of the industry are here, the major players. It’s a good mixture of manufacturers and demolition companies.”

Similar views were shared by other attendees, such as Jeroen Van Voorden, international account manager at Dehaco, who described it as, “A really good opportunity to meet the dealers.” A couple of metres away at Hydraram’s booth, export director Peter Wassenaar called the event ‘one of the best’ and praised its relaxed atmosphere. Hydraram certainly added to the relaxation with their massage chairs. For the more adventurous visitor, Hydraram also offered a virtual reality ride. With a smile on his face, Wassenaar remarked: “You have to try something unique.”

Nearby, Blastrac was highlighting the BS-75, a self-propelled floor stripper. “It can be easily demounted into three parts: the motor, the middle part and the handle,” said Alexander Saalmann, product and marketing manager at Blastrac. Its small size and electrical drive makes it suitable for indoor and outdoor medium sized renovation jobs. Other new developments from the company included the BMC 335Elite grinder, which is a heavy duty electric shaver with increased weight for more efficient sawing action. It is also available in a remote controlled version and features a special operating handle with depth indicator and integrated control panel, one lifting eye and three swivel front wheels.

Over at ICS, one of the latest releases was its most powerful gas driven cutter, the 695XL, which features an easy to start engine with a higher energy ignition system, as well as a new muffler, carburettor, piston and cylinder. Based on the 695 saw platform, the 695XL is the highest horsepower ICS gas power cutter for frequent use for general construction, utility contractors and concrete professionals.

Allu was also present at the conference and highlighted its new Allu Crusher, which was launched in March at Conexpo/Conagg in Las Vegas, USA. The Allu Crusher features reversible crushing, feed plate design built into the jaw and simple mechanical pin adjustment for output size regulation.

Deconta, which manufactures safety and environmental technology, presented its new dust protection door, ‘Smart-Door’, which covers door openings and ionises the entire room. “It is foldable and simple to carry around,” said Christian Krolle, managing director of Deconta, as he demonstrated it together with the new negative pressure unit S200. The S200 is connected to the internet and, thanks to the new SRE ‘Connect’ feature, can be controlled via a smartphone.

Another new development in dust protection side was Dustcontrol’s DC ‘Tromb Twin’, a portable dust extractor with integrated pre separator for large amounts of dust. It is particularly suitable for concrete grinding as 80-90% of all coarse material is separated in the pre separator, with the remaining dust entering the filter cyclone. “You can use it together or disconnected, separately,” explained Tim Hasekamp, sales manager at Dustcontrol, who added, “The reception has been very good for this product.”

At the Kinshofer booth the new D37HPX demolition and sorting grab equipped with Kinshofer’s cylinder-less ‘HPXdrive’ technology was displayed. “The user can change shells and still use the same module,” said Stefan Sparwel, head of business development at Kinshofer. The HPXdrive has been used on grabs for excavators with an operating weight of up to 4t, 6t and 9t respectively and is now available for excavators up to 37t. The shells are driven by the compact HPXdrive, providing a constant closing force for the complete opening and closing process. The torque is generated by two pistons, which run opposed and have four helix threads, with the force being delivered to two shafts on which the shells are mounted.

The range offers large re-handling clamshell buckets as well as timber and universal grabs for excavators with an operating weight of up to 40t. There are no greasing points, as the interior parts of the HPXdrive run with the oil of the hydraulic circuit. The integrated rotation features sealed swivel and bevel, directly accessible rotary feedthrough and motor, plus an integrated non return valve. The perforated shells of the demolition grabs let fine dust and gravel through.

The ‘D-HPX’ series is suitable for both daily work and more difficult tasks, with the HPXdrive and its integrated rotation forming a compact unit with no protruding components, such as cylinders. The large D-HPX series comprises the D27HPX for excavators with up to 27t operating weight, D32HPX up to 32t and the largest, D37HPX, up to 37t operating weight. The D37HPX presented at Kinshofer’s booth also featured an integrated OilQuick adapter.

At Rotar’s booth, commercial director Louis Broekhuizen shared the news of the company’s expanded range of RCC concrete crushers which has been increased from one to three, now comprising of the RCC 20, the RCC 25 and the RCC 30 for carriers of 18-25t, 20-30t and 25-35t respectively. The RCC series is characterised by ‘Ramplifier’ technology, which is installed inside the cylinder rods. The Ramplifier amplifies the forces and is activated based on resistance. Once the resistance rises above 250bar, the Ramplifier is activated. Once the resistance drops, it turns back to normal speed modes. Once the machine pressure rises to 350bar, the output of the RCC with the Ramplifier technology creates up to 700 output pressure on each cylinder. The outside of the cylinder looks like a standard cylinder, with the technology being protected in the rod of the cylinder.

Rotar states that the Ramplifier is the most silent booster available in the demolition industry. “The cutters have a very light sound because of the cylinder oil,” explained Broekhuizen. The RCC also has a system for interchangeable wear parts which avoids welding on the jaws making it easy to maintain the wear parts in a short period of time on the job site. Broekhuizen concluded: “Avoiding welding extends the lifetime of a pair of jaws and reduces downtime of the tools.”

Interesting lectures on a wide variety of topics

Adjacent to the exhibition area was the lecture room, where a total of 15 presentations covered a wide range of industry related topics. Alix Reichenecker from the Dutch cooperative PolyStyreneLoop, for example, presented how EPS and XPS insulation materials can be recycled using a novel process. Lectures on the latest developments in TRGS 519 and the ‘Industrial Safety Regulation’ brought the audience up to date on the latest developments in these areas. Examples from construction site practice were made clear including the difficult conditions faced when dismantling often has to be carried out in such areas as inner city sites, high rise buildings, as well as the selective partial deconstruction of an active chemistry park. Members of the Blasting Technology Committee of the DA also showed the precision with which buildings can be blown up under the most difficult conditions.

In view of the challenges faced when recycling construction materials, Andreas Pocha, managing director of the German Demolition Association (DA), stated that members should, “Have courage to rethink and courage to innovate,” Ranga Yogeshwar, physicist and science journalist, also asked for collective industry courage to ‘rethink’ in his keynote speech.

Awards were also presented, with the much sought after DA Innovation Prize being awarded to Daniel Rank from the Technical University of Munich. This was for his research about the possible uses for minerals emanating from the recycling of construction materials, for which he used the example of the former Bavarian barracks in Munich. In cooperation with the company Ettengruber, he showed that it was possible to construct a model building with 100% recycled aggregates from the demolition material from the barracks. Since such aggregates are not permitted by law, building inspection approval was necessary, as Michael Weiß, managing director of Ettengruber, explained in his lecture.

The conference ended with a dialogue evening and get together in the bar area. Despite the conference’s already relaxed atmosphere, this provided a chance for the attendees to mingle in a less formal manner after an active and successful conference. The next Fachtagung Abbruch will be held on 5 March 2021.