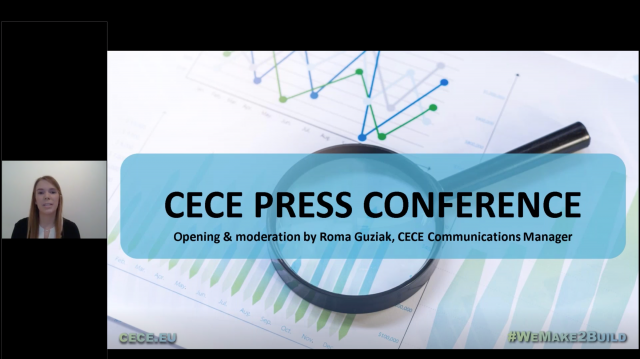 The Committee for European Construction Equipment (CECE) has released its Annual Economic Report on the state of the European construction equipment sector. In 2020, the industry suffered less than expected, and views 2021 with a positive mind set.

Sales of European construction equipment fell by 6.4% in 2020. This seemingly modest drop is due to the performance of high volume light and compact equipment, whose sales were almost unaffected at -3%. In contrast, heavy construction machinery suffered a 19% fall in sales, in what emerged as a challenging year. These figures are the result of a combination of an anticipated cyclical downturn after years of growth and a slowdown in business activity due to Covid-19. Unlike previous years, earthmoving equipment, road equipment, concrete equipment and tower cranes experienced similar market patterns, despite the impact of strong sales of light equipment.

Presenting the report to the press, CECE president Niklas Nillroth focused on the positive aspects of last year's results and this year's expected outcome. “As we all know, 2020 was the most unexpected and unpredictable of years. From an economic point of view, it represented a year of disruptions with certainties and forecasts crumbling before our eyes. However, as you will see in our report, the construction and industrial sectors in Europe have shown a great amount of resilience and capability to rebound quickly, limiting the damages of the first semester. The foreseeable boost in construction and infrastructure activities from the European Recovery Plan represents another reason to remain optimistic for the near future.”

2020 began in line with expectations, with a 5% market decline in the first quarter – a cyclical downturn that had been anticipated. However, in the second quarter, lockdowns across Europe began to take their toll and pushed the market to 28% below the levels of the previous year. The decline in sales in Q2 also reflected the impact during Q2 in 2019 when the bauma exhibition was held, with a usual short term boost in sales. With relaxation of lockdown measures in Q3, sales reached similar levels as 2019 and were flat year on year. The last quarter of the year saw the expected improvement in demand, and sales in Europe went up by 9%. This also reflected business postponed in the first half of the year materialising in Q4.

From a geographical perspective, market sales in most countries reflected the impact of the pandemic and the lockdowns, but there were a few exceptions. Most notably, the Italian market reached the same level of sales as 2019, and the Turkish market recovered from its 2019 crash.

While the short term macroeconomic outlook remains uncertain, the business climate within the European equipment industry remains positive. After months of improvement, the business climate index in CECE’s Business Barometer survey is significantly higher in March 2021 than at the outbreak of the pandemic in spring 2020. A significant majority of manufacturers expects business to grow in the first half of the year, and the level of satisfaction with current business has also improved significantly. In addition, the order intake for European manufacturers has been growing year on year since December 2020 with European market sales showing clear growth. This is consistent with the improvement in equipment sales seen in Q4 2020.

A forecast of 5% growth in the European equipment market is a realistic assessment of prospects for 2021. However, against a background of continued uncertainty and high absolute levels of sales, even a flat market in 2021 would not be a disappointment. The world market is also likely to show moderate growth in 2021, but the volatility of the Chinese market and its significant influence on the overall outcome means that it is difficult to quote reliable figures for overall global growth levels. In the medium term, the construction equipment industry faces many substantial risks, including higher debt levels in many countries as public infrastructure investments will suffer when austerity measures must be put in place.

The CECE Annual Economic Report contains sections on the macro economic situation, the performance of the construction sector, the main markets and main segments of the European construction equipment industry. The report includes information from national CECE member associations, shedding more light on regional developments in the European construction equipment sector. The full report with detailed figures and graphs can be viewed and downloaded via CECE’s website.