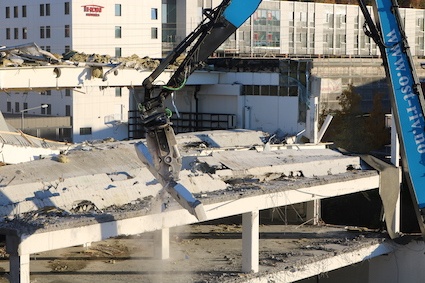 Changing demolition tool in a twinkling of an eye

Tool changes in seconds, less machines on the worksite, higher production rates, more profit, and the right tool for the job, lower transport costs, no oil spill, improved safety with no people around the excavator when changing tools and no protected hose run. These are the major advantages when using a proper, fully hydraulic, automatic quick coupling system. Here we outline the latest developments from suppliers in this year’s PDi feature on quick coupling systems for demolition excavators. Jan Hermansson reports.

The working environment for demolition excavator operators is steadily getting better and better. The cabins are being improved with more space, visibility and better protection from falling debris. Now the right quick connect system from a professional supplier means they don’t even need to leave the cabin to change a hydraulic attachment. But that is not even news anymore, as there are an assortment of dedicated manufacturers who develop and manufacture fully hydraulic and automatic quick couplers systems for demolition carriers, with the leading companies being OilQuick, Steelwrist, Variolock from Lehnhoff, Likufix from Liebherr, EC-Oil from Engcon and Riedelberger. There is also a rumour that Caterpillar is working on a new full automatic system but PDi is unable confirm this. What is definitely new since about a year ago is that some other manufacturers have started to develop their own quick coupling systems, which is covered later in the text.

The quick coupling system revolutionised the working day for the operator being invented during the mid-1990s by OilQuick from Hudiksvall in northern Sweden. OilQuick, founded in 1952, is now the largest provider of fully hydraulic and automatic quick coupling systems for excavators in the world. It is a modern engineering and sales company, specialising in automatic quick coupler systems not only for demolition excavators, but also for general excavating, wheel loaders, lift trucks, lorry cranes and material handling machines. OilQuick has experienced very strong growth during the last 15 years and since the beginning of 2000 increased turnover tenfold. Today around 80% of production is exported to Western Europe, Japan, Australia and USA, with the OilQuick OQ range being of particular interest to the demolition industry. The OQ range contains nine different models ranging from OQ 40/24 for excavators weighing from 1t to OQ 120 for excavators up to 120t. This is currently the widest selection on the market offering attachment changes in about 10 seconds without having the operator leaving the excavator cabin.

Besides the Scandinavian countries, OilQuick has gained a strong foothold in Germany, forging close relationships with several suppliers of demolition excavators. OilQuick also has several subsidiaries around the world, including a US subsidiary. Sales of quick coupling systems within the demolition industry are rapidly increasing in the US, and the company will in March exhibit at the US Demolition Association convention in Colorado. OilQuick also exhibited at the recent DEMCON show in Stockholm. Parallel to the show, the Swedish Demolition Awards 2018 took place, with Åke Sonerud, part owner and chairman of OilQuick, being honoured with the Swedish Demolition Awards Honorary Prize. The company is of course exhibiting at bauma with new innovations being expected at the show.

For a number of years the OilQuick system was one of very few that was fully hydraulic and optimised for demolition contractors, however, other similar systems have been released. Also from Sweden is the company Steelwrist, which released in 2017 a similar fully hydraulic and automatic quick coupling system called the SQ Auto Connection quick coupler system. When the system went in to production during the autumn of 2017, Steelwrist also released new coupling technology called Qplus, with initially two models of automatic quick coupling systems being launched: SQ60-5 for excavators between 12t-20t and SQ70 for excavators between 18t-33t. Scandinavia warmly received the system from Steelwrist with this soon replicated in other parts of Europe. During 2018 Steelwrist refined its system and launched a third model, the SQ80 for excavators between 25t and 43t.

The Steelwrist SQ Auto Connection couplers follow the internationally growing symmetrical standard, a wedge locked system according to the ISO13031:2016. In addition, and in order to comply with ISO13031:2016, Steelwrist’s SQ couplers and SQ tiltrotators also include patented ‘Front Pin Lock’ technology which ensures increased safety by preventing the operator dropping work tools by mistake.

During the recent bauma media dialogue, PDi discussed developments with Steelwrist’s part owner and president, Stefan Stockhaus, who mentioned that during bauma Steelwrist would release two new models, SQ65 and SQ70/55. “Customers have highly appreciated Steelwrist’s move into the fully automatic quick coupler market with a very competitive product offer which is compatible to the market standard. Since the launch of our SQ60, SQ70 and SQ80, our customers in Central Europe have been desperately waiting for the SQ65 and SQ70/55 from Steelwrist. Now we are very happy to launch those new quick couplers at bauma 2019,” says Stefan. The new SQ65 and SQ70/55 will be available for ordering right after bauma and deliveries to customers will start from July 2019 onwards.  Another development is a new electrical connector for connecting SQ couplers and work tools. The V14 is a robust fourteen pole connector that can be retrofitted in existing SQ and OQ type couplers and work tools. Stockhaus also mentioned that additional models for heavier demolition carriers are part of it future plans.

German attachment specialist Lehnhoff will at bauma present various new products including the symmetrical quick coupler for excavators from 22t-32t. Also new is a hydraulic HS Plus quick coupler system for mini excavators from 1t-6t, to which Lehnhoff added a safety addition last year. On the proven HS models, the extension of the locking bolt is signalled to the operator by a display pin on the quick coupler that is clearly visible from the cab. With the HS Plus quick coupler, a release button ensures that the bolt is in the end position. The button is mechanically actuated by the fully engaged attachment, and only then releases the spring force hydraulically, which leads to the extension of the locking bolt on the mini HS coupler. Consequently, the user can be absolutely sure that the attachment and the quick coupler are safely and securely connected.

The manufacturer Mecalac has announced that it will launch a new automatic connection for the hydraulic lines between the machine and hydraulic tool called ‘Connect Energy Link’. With this, the company is adding more to the performance and versatility of its excavators with an ingenious system that provides automatic connection of the machine’s hydraulic lines and electric cables to the hydraulic attachment. In addition to the improved productivity that naturally results from cutting the amount of time normally spent changing attachments, another consequence is improved safety and comfort for operators.

An intuitive recognition electrically and hydraulically adapts the machine to the attachment taking place thanks to RFID (radio frequency identification) technology. This patented Mecalac innovation combines a sensor fitted to the end of the Mecalac excavator’s articulated arm with an electronic chip built into the hydraulic tool. This means that with the new Connect Energy Link coupler, attachment recognition is intuitive and immediate. Everything is automatically configured in advance from the driver’s seat, without the operator needing to become physically involved in any way. Furthermore there are no more hydraulic settings to manage as the central system takes direct control of adjusting flows and pressure.

Surprising news for bauma, is that the Italian demolition attachment manufacturer, VTN Europe, will launch its own fully automatic quick coupling system. So far PDi has received very little information about the new system called ‘Link-o-Matic’, but what we know so far is that it is a fully hydraulic and automatic system where demolition attachments can be changed in seconds, directly, without that the operator having to leave the cabin. We have no information about that the system which is produced in cooperation with a quick coupler manufacturer, with more information set to be released at the VTN Europe booth at bauma.

A company that has strongly been gearing up during the last couple of years is Arden Equipment from France. Daniel Dupuy, president of the company, stated to PDi that during 2018 it grew by 18%, recently opening a subsidiary in North America. Exports of the company’s products account for 65% of turnover, and are said to be increasing. Arden Equipment now has a comprehensive range of attachments for handling, sorting, demolition and recycling applications, with its series of universal shears with built in dust prevention, called Arden Jet, being its latest newsworthy development. The Arden Equipment tool range is set to expand and a number of new demolition tools will be revealed at bauma. The whole tool range will be remodelled over time, and a number of new models added, with Arden Jet being available on all demolition tools including its breakers in the near future. Arden Equipment also has an extensive range of quick coupling systems for its attachments developed in house, with new solutions for quick tool exchanges set to be introduced at bauma.