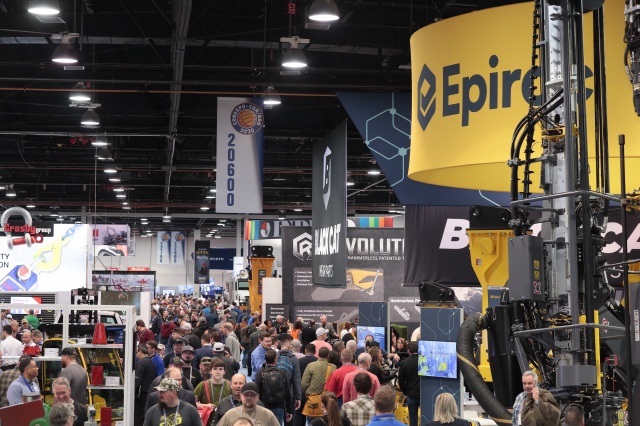 The Las Vegas exhibition was probably the last trade show that managed to take place before Covid-19 brought the world to a halt. It was however still forced to end one day earlier due to US boarder closures. Despite a tough challenge due to the Corona virus, the show turned out to be rather good, with many new developments and a lot of business taking place.

e majority of exhibitor staff was already on the show grounds of the Las Vegas Convention Centre when the outbreak of the Corona virus took hold in China and also started to increase in Europe and USA. Some exhibitors cancelled their participation, such as Volvo CE, but most of carried on.

However, in the last couple of days of the show, many visitors decided to take an earlier plane home due to rumours that several countries would be closing their airspace and airline companies started to cancel flights. The last day of the show was also cancelled due to Donald Trump’s speech about closing the boarders. Besides the global health concerns, the show turned out a rather strong showing. Registrations for the show totalled 130,000 attendees who visited the 2,300+ exhibitors who showed their wares on more than 250,000m2 of exhibition space. There was a lot of new equipment and tools launched during the show and here are some examples of these developments related to the demolition, recycling and concrete cutting industries.

The cream of manufacturers

Conexpo/Conagg is normally not a show for concrete cutting and concrete floor grinding equipment, with manufacturers from the industry mainly gathering at World of Concrete. However, there were quite a number of diamond tool suppliers exhibiting including Diamond Blade Warehouse, Diamond Chain Company and Diamond Speed Products. ICS Blount also exhibited its latest developments in power cutters and chain saws, including the Pentruder range. As well as Husqvarna and HTC, Hilti also exhibited, as did concrete floor grinding machinery and tool manufacturer Superabrasive. The latter showed its Lavina series and its other latest developments including new grinders, vacuums and ride on power trowels.

All of this meant that despite all the issues involved with the Covid-19 virus, Conexpo/Conagg 2020 turned out ‘ok’ with a fair amount of business being conducted on the show grounds. The next show will take place 14-18 March 2023.