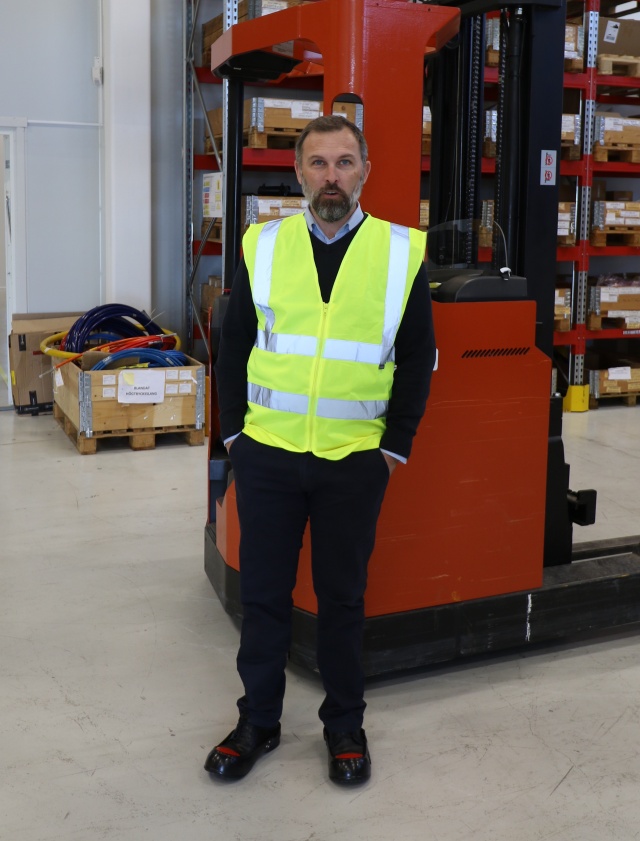 Conjet on a strong path

Conjet is making strong progress with a 50% increase in sales, a strengthening of human resources and distributor network as well as a tripling of the production area at its new premises.

A lot has happened at Conjet in recent years. PDi magazine has on several occasions reported on various developments that have happened within the organisation at the Swedish manufacturer of hydrodemolition equipment.

Recently PDi magazine visited Conjet's head office and manufacturing plant to see Conjet’s new and purpose built premises. The new facilities are three times the size of the old one. It has a 1,800m2 area for manufacturing, warehousing and service, of which 1,500m2 is a dedicated production area. There are also 800m2 of offices and training facilities.

“We had a great need to find new and larger premises as we were very cramped in the old premises,” says Ola Wagner, who is the new COO (chief operations officer) at the company since mid 2020.

“In the new premises, we have a significantly better flow in production and warehouse management. Everything is more divided, and the premises give us completely different possibilities. We can also grow in these premises,” adds Robert Kreicberg, who is CEO for the company.

The new premises are located in Österhaninge, just south of Stockholm and close to the old location. The intention at first was that the company was going to expand the old premises but there were difficulties with building permits. Conjet then more or less stumbled on the new premises in the spring of 2021, and in November last year the move to the new location began.

Today, there are 27 employees within Conjet, of which there are 24 in Stockholm and the rest located at the office in North America. PDi has continuously informed readers through the magazine about new hires at the company, but we can now take the opportunity to tell about additional newcomers like Rebecca Nilsson, Marketing Manager, Mariusz Stabryla, Production Manager, Karl Fritz, Warehouse manager and Simon Christensson who is responsible for orders and logistics. Rather new in the company is also Ola Sylvan who is product development manager.

The 1,500m2 large production premises, which has a ceiling height of 6.5m, has been designed to have a natural flow in production that makes assembly smoother. When Conjet first moved into the premises, all the traverses connected to the assembly were first installed so that it would be easy to move materials and components. The traverses have a lifting capacity of up to 1,200kg. Bearings with picking places for the components are conveniently located and allow easy access when needed. Today, there are a total of nine individual assembly locations, with each robot being built on one and the same station from the beginning to a complete machine. But the idea is that in the long run, when the robots become more modular, that assembly will take place at several different stations. In the long run, it will also be possible to expand to shift work during periods when demand requires it. Next to the production areas there is also a complete service workshop of 200m2 with a demonstration area directly connected outside. There is also a large machine washing room.

Since Conjet was acquired from the original owners, not only the workforce and the production area have increased, as sales have also grown. In 2020, the company had sales of €5.71M and in 2021 sales has risen to just over €8.42M - a 50% increase in sales. Robert Kreicberg does not really want to reveal what the company is aiming for during current year but says: “We are a growth company and such companies aim to increase every year by at least 20%.” The increase in sales may not reach 50% in 2022, but if one can make an estimate, sales may reach €12.5M.

This continued increase is based on the need for concrete repairs around the world. Many concrete structures are severely neglected, not least in the United States. In the USA, there are lots of bridges, viaducts, roads and not least tunnels, that are in dire need of renovation. A country that in the 1980s had perhaps the best road network in the world, has in many States turned into an infrastructure disaster area. There are for instance 541 highway tunnels in the United States, most of which are in very poor condition being built between 60 and 110 years ago. This means that there is a major need for hydrodemolition services here.

“The need for concrete repairs is today great all over the world and we have the equipment. It is our ambition to make Hydrodemolition the standard for concrete repairs,” says Kreicberg, who adds that Conjet has changed a bit in its policy over the past two years. “Our focus today is entirely on building robots and other equipment for efficient concrete repairs, and at the same time establish strong partnerships with pump manufacturers and manufacturers of water purification systems. As for the pumps, it is mainly German Hammelmann we work with and our water treatment system comes from the company Reprotex.”

Strengthening of the distributor network

In addition to investing in building the company's organisation internally, Conjet is also actively working to review and expand its distribution network around the world. Today, the company places much higher demands on its distributors and recently has added a number of new distributors around the world, including the new distributor Doornbos in England and Ireland. Today, Conjet has about 15 distributors, of which ten are new, with the focus on Conjet's marketing and sales being on Europe, North America, Asia and Australia.