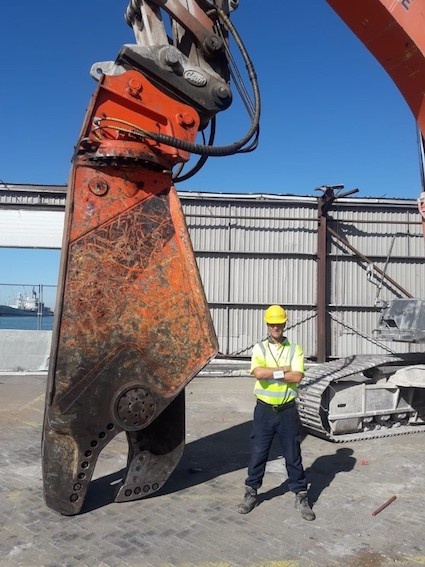 Fortress attachments are designed and manufactured by ShearCore, which is located in Superior, Wisconsin, USA.

The company was founded by Bruce Bacon, who has worked in the scrap recycling and demolition industries since the early 90s,, initially as a sales manager for Roy Labounty. Roy sold Labounty to Stanley Tools and then retired, which led to Bruce co-founding Genesis Attachments, and to found ShearCore after his partners at Genesis decided to sell the business.

Fortress mobile shears are designed by arguably the best mobile shear designer in the world, Ross Christenson. Ross deserves credit for several shear innovations over the past 20 years while previously designing shears at both Labounty and Genesis. It can now be said that Ross has surpassed himself with his work on the Fortress mobile shear line, with Ross’s designs being known to be powerful, robust, thoughtful, and designed for ease of maintenance.

ShearCore’s manufacturing is led by Jim Campbell. Jim was the head of manufacturing for Genesis for its first 12 years, and prior to that he ran the reconditioning department at Labounty. Jim’s experience , and his team of attachment machinists and welders, enables him to manufacture the best product possible.

All this said and done, the true value of Fortress attachments comes directly from the words of its customers. “With our old shear, we could only cut 50t-70t a day. With the Fortress we’re doing 100t a day,” said Daniel Robertson, Robertson Metal Recycling of North Dakota. “We replaced one of the competitor’s larger shears with a Fortress shear that was one size smaller than the competitor’s, and the Fortress outperformed it,” Shane Durand, CEI in Alaska.

It’s not just American customers who enthuse about the attachments. “These are the best shears on the market backed by the best warranty in the business! Hands down!” Said  Greg Morley of Shear Power Corp located in Ontario. “Our Fortress shears outperform any shear we’ve ever had, and anytime we need assistance the service and support from the ShearCore team in unmatched.” Travis Mryglod, Mryglod Steel & Metals in Saskatchewan, whereas Trevor Munro, MetalCorp in New Zealand stated, “We love our Fortress mobile shear.”

Bill Munday, of  the UK’s Hughes Salvidge also added a ringing endorsement: “I have been carrying out maintenance and repairs on various demolition attachments for 20 years, and since we’ve started purchasing our Fortress shears and processors, we believe Fortress to be the highest quality demolition attachments on the market by far. They are very easy to maintain and very reliable.”