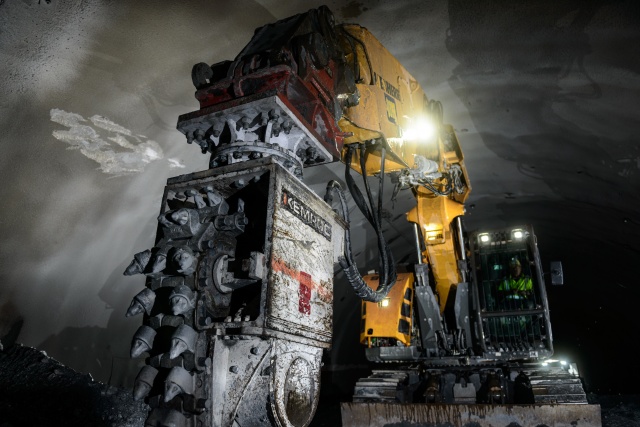 Cutting technology is playing an increasingly important role in the tunnel projects undertaken by the Austrian construction company Porr and is being used currently during a major infrastructure project in Poland. Porr has been commissioned with the planning and construction of the 16km long section III Bolków-Kamienna Góra of the S3 motorway which will connect the Baltic port of Swinoujscie with the Czech Republic and Austria. One of the most complex engineering tasks is the construction of a 2,300m long twin tube road tunnel which by the end of July 2021 had seen the excavation about halfway advanced.

While there are hard mineral conglomerates in the southern tunnel sections, which are loosened by blasting, soft shale rocks dominate in the north. Here, vibrations caused by blasting could damage the bedrock which resulted in the decision to use tunnel excavators and cutting attachments for the excavation. A total of five cutters are in use in the two northern tube sections: four standard rotary drum cutters from the company’s own plant fleet and an EK 140_800 chain supplied by Kemroc.

According to project manager Norbert Hörlein, the cutters complement each other: “Chain cutters are not comparable with blasting in terms of their driving performance in hard rock. However, where cutting works economically, chain cutters are more efficient in excavation than rotary drum cutters. For scaling, on the other hand, rotary drum cutters are better suited overall. We install steel lattice arches covered with shotcrete as rock support. These are at risk when working with chain cutters because these machines are designed longer and the operator – with a required precision in the centimetre range – cannot see his working area quite as well as with rotary drum cutters.”

Norbert Hörlein concludes by comparing the cutting process with the blast free excavation by tunnel excavator and demolition bucket with ripper teeth. “With this method the rock is torn out of the rock mass arbitrarily and with sheer force the rock breaks out in undefined size based on fissure bodies and cracks – a mechanical failure of the rock mass. In comparison, cutters work in a minimally invasive way, like fine medical surgical instruments. They also allow the excavator operator to cut the desired shapes very precisely.”