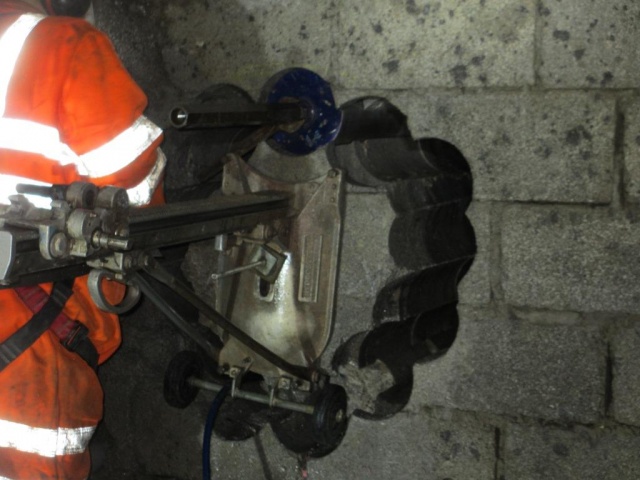 A diamond drilling duo has been praised for their role in plans to reopen a tunnel in Wales that will benefit the whole community.

The team at D-Drill’s South Wales office in Bridgend was called in to find a way through a section of wall inside the Rhondda Tunnel to allow a detailed examination to take place. This forms part of a project by a group of volunteers who are working to reopen the tunnel, which is the longest disused tunnel in Wales being approximately 3,000m in length. The original construction took over five years and was completed in 1890, serving the steam railway network. It was closed temporarily in 1968 but has never reopened, with the plan now being to reopen the tunnel to the public for walking and cycling.

In order to reopen the tunnel, a range of scoping and investigative work has been carried out, with a wall inside the Rhondda Tunnel needing to be compromised in order for Balfour Beattie to carry out a detailed examination. D-Drill experienced engineers Alun Burnell and Gary Robinson, were tasked with breaking through to the other side. In order to do this they needed to find out how thick the concrete wall actually was (2m) through drilling a 100mm pilot hole, using a Weka DK32.  After working out that vital piece of information, the duo decided that the best solution was to stitch drill through the solid concrete wall using a Weka DK32. A Hilti TE60 was utilised to bolt to the wall and a Hilti TE1000 breaker was used to remove the solid lump of concrete in the centre where the wall had been stitch drilled.

Steve Mackey, the chairman of the Rhondda Tunnel Society, the organisation behind the project, wrote to D-Drill to pay tribute to the duo’s efforts in carrying out the difficult task. “They operated the machinery as if it was an extension of their bodies. It was fascinating. Every time they surfaced, they were soaked to the skin, wellies full of water and absolutely shattered. However, they always got up after their lunch and descended back into the tunnel to complete the job with incredible enthusiasm.”

Steve Furley, manager of D-Drill’s South Wales branch, said: “We pride ourselves in going above and beyond for clients. This is a major project that could bring significant public benefits and we were very pleased to be called in to carry out this piece of work.”