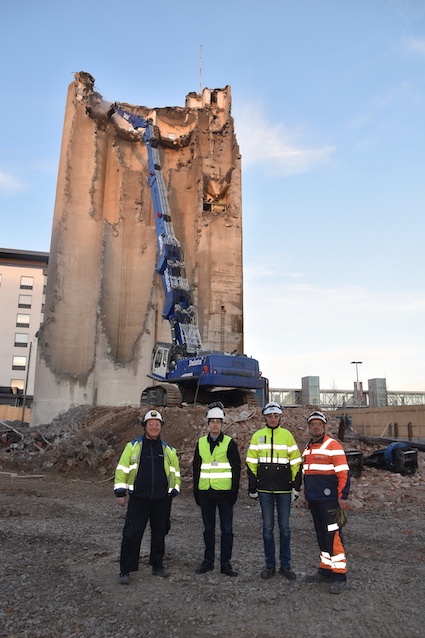 Finland based Delete is one of Europe’s brightest demolition stars. A young company by the industry’s standards (Delete was established in 2010), it has been developing by leaps and bounds during the current decade. Now the Delete Group incorporates 40+ companies focusing on demolition, recycling and industrial cleaning. The contractor, which operates throughout Scandinavia, invited PDi to one of its ongoing projects in Finland. Andrei Bushmarin reports.

Located in the eastern part of the country, Mikkeli is a quintessential Finnish town surrounded by a score of lakes. An interesting fact about this quiet unassuming place is that during World War II it served as the headquarters for the Finnish army. Marshal Mannerheim’s personal railway car, which he used as a command post, is now on display, parked next to Mikkeli station. Also in close proximity to the train station and highway five, there once stood a six storey grain mill and a battery of silos that Delete was contracted to pull down.

Going against the grain

The grain milling facility was built in 1921 for wheat grinding and flour processing purposes. Added in 1963 are 45m silos which have dominated the vista of the predominantly low rise surroundings ever since. Due to this, the authorities originally wanted to save the buildings as city landmarks. However, that plan was scratched once it was learnt that the silos had been infected with microorganisms, and the grain mill was already dilapidated beyond rehabilitation. A difficult decision was then made to demolish the entire 10,730m3 complex. A number of specialist contractors bid for the job, but the city council chose Delete on the grounds of its job specific expertise and the most competitive bidding price.

Separating the wheat from the chaff

Since the industrial complex was located bang in the city centre, next to the highway and train lines, Delete started out in the end of September by fencing off the job site and rerouting the traffic. The next task involved the removal of asbestos from inside the grain mill. Once the mill was fully demolished in late October, the debris was piled up next to the silos to elevate the ground level for a high reach demolition excavator to operate from. For the high reach part of the project, Delete selected a customised Liebherr 974 excavator equipped with a 42m boom, and a Volvo 480 demolisher capable of reaching up to 28m. The attachments – a demolition shear, a concrete crusher and a hydraulic breaker for the subsequent dismantling of the foundations - were supplied by Arden Equipment. A Cat 323 excavator was also brought onsite for general excavation and material handling purposes, with the top down demolition of the silos beginning in earnest in mid-November. A demolition crew consisting of two excavator drivers, a project manager and a foreman would work the 7a.m to 7p.m. shifts to take down the silos one by one.

Although not particularly large scale, the Mikkeli project is rife with challenges. The sheer height of the silos towering above every other edifice in town is itself daunting. On top of that, the silos stand next to busy traffic lanes and other buildings. Underneath and around the site there are electric cables and plumbing pipes that need to be left intact, with the buildings’ thick foundations having to be demolished quickly and efficiently while keeping the noise and vibration levels to a minimum. As the project unfolds, the Delete team led by project manager Petri Saikkonen keeps successfully overcoming all the said obstacles, with representatives from the Mikkeli city council, Jarkko Hyttinen and Jyrki Kurronen, confirming this to PDi. In particular, Jarkko Hyttinen was stated that, “it was very satisfactory for him to see a zero mistake performance by the Delete crew”.

Being an environmentally conscious company, Delete recycles everything it demolishes. All materials get separated onsite first, and then are transported to a nearby waste management site, or to Delete’s own recycling facility near Tampere. According to the company, its material reutilization rate reaches 99.2%. For every job site, the Finnish contractor can measure the carbon footprint using an in house carbon footprint calculator based on the EN 15804:2012 standard. The calculations take into account emission and waste reports. The emission report estimates energy and fuel consumption, equipment transportation to the job site, and emissions generated by transportation and treatment of construction waste, accounting for different classes of waste and their delivery locations. The Mikkeli site is no exception: once demolition of the silos and the foundations is finished, the resulting debris will be partly used as a fill up material, and partly moved to the Metsäsairila waste treatment facility owned by the city for further recycling. The project, which is proceeding to schedule and within the specified budget, is slated for completion by the end of February 2019.