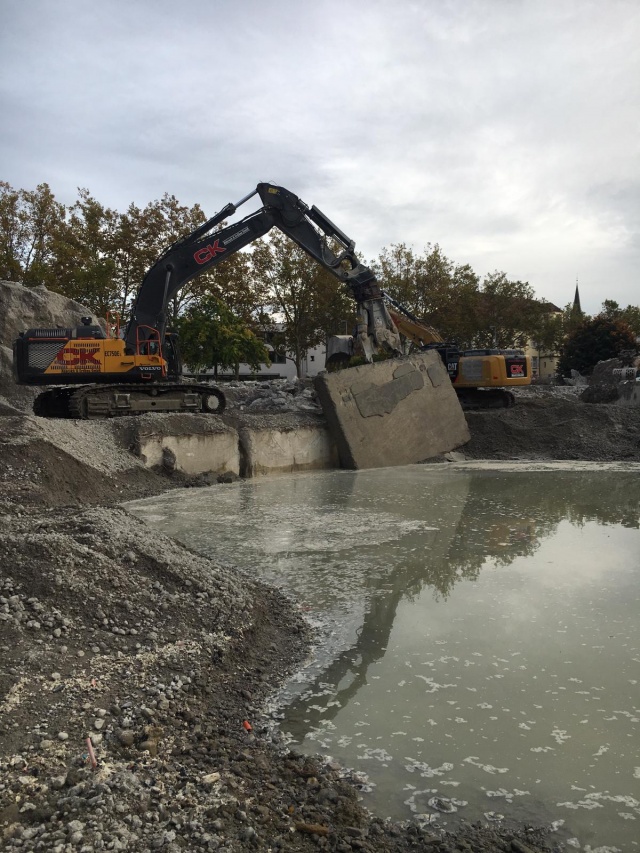 Demolition experts from CK Abbruch & Erdbau were confronted with an unusual task at a job site in Konstanz, on the shores of Lake Constance. To demolish an old hospital, they had to remove a 1,100mm thick concrete foundation. After weighing up all options and calculating expected costs, the team chose to use a Kemroc cutter wheel mounted on a 40t excavator. This proved to be the most economical and the most environmentally friendly solution.

The site of the old Vincentius Hospital in the southern German city of Konstanz had to be cleared before construction could start on the development of a modern residential area complete with retail units and restaurants. The contract for the first phase, which involved the careful demolition of the 40,000m3 existing building, was given to demolition specialists CK Abbruch & Erdbau GmbH based in Eislingen. They quickly discovered that there was an unexpected challenge; the hospital, constructed in the 1970’s, was built on a 2,000 m2 concrete slab which was over 1m thick.

According to an independent report, the use of an excavator with hydraulic breaker was ruled out because of the unacceptably high noise levels that would be generated. An additional complication was that the vibration from the hydraulic breaker transmitted through soils saturated with water, due to the proximity to the lake, could damage a neighbouring listed building which had to be preserved. Demolition using drill and blast was also ruled out on the grounds of noise and cost. Using a concrete saw was also considered but it wasn’t economically viable. After an amicable exchange of experiences with another local demolition contractor, managing director Markus Christadler decided to try a Kemroc cutter, wheel mounted on a 40t excavator.

There are four different size models in the Kemroc DMW range of cutter wheel attachments suitable for excavators from 15t to 60t. Two high torque hydraulic motors, one each side of the cutter wheel, provide high productivity with maximum cutting force. Even in hard rock or heavily re-enforced concrete, there is enough power to achieve high production rates. The availability of several variations of cutter wheel, for depths to 1,000mm and widths up to 400mm, enables use on a large number of applications for the cutter wheel attachment. For this project, Markus Christadler rented a DMW 220_1000 cutter wheel with 1,000mm cutting depth for a test. After one week of trials on a 40t excavator, results were so positive that the demolition company purchased an identical attachment for the completion of the crucial phase of the project.

At the demolition project in Konstanz, the excavator operator cut out 15m2 blocks which were subsequently lifted and stood on edge using an 80t excavator before being broken up using a shearer. Some of the broken material was processed through a mobile crusher on site and the rest was transported to a recycling facility. “It would have been quicker with a larger excavator and hydraulic breaker, but under these conditions, it was not possible. Even so, we achieved average rates of 10m to 15m cutting length per hour which gave us a production rate equivalent to using drill and blast but at a much lower cost. The noise monitors didn’t record any high values. Drilling 800 to 1,000 bore holes would have been much noisier and uncomfortable for the people living nearby. At surface levels, the cutter wheel was working under a small depth of water so there was very little dust generated,” said Markus Christadler when commenting on his first project with his new Kemroc cutter wheel.

Since the project in Konstanz, CK Abbruch & Erdbau have had several applications where they have been able to use the Kemroc cutter wheel, one of which involved the excavation of trenches to tight dimensional tolerances in compact rock for foundations. Markus Christadler summed up his comments on the cutter wheel by saying, “All in all, the cutter wheel attachment is a tool well suited for the demolition of concrete and excavating in urban environments where there are major constraints on pollution.”