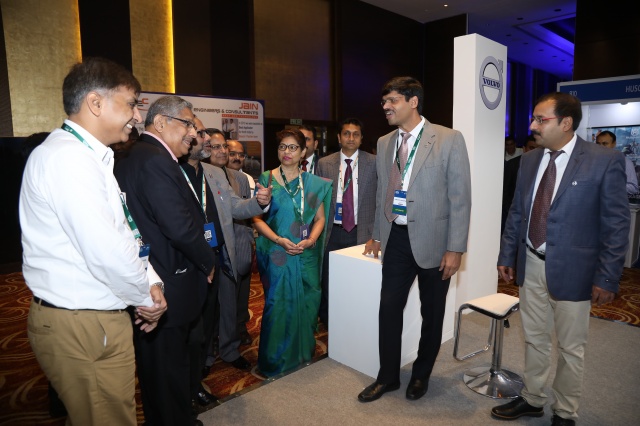 India’s ever first conference for demolition, recycling and remediation was held on 13 November at the Hotel Sahara Star in Mumbai. The result of the event can be summarised in a few words: a true success!

Although PDi Magazine and Riverbends Publishing, LLC, were co-producers of Demtech that is not the reason why I write that the event was such a success. I have written it because it is actually true.

To arrange a new industry focused conference was a risky project. Mohan Ramanathan, owner of the Indian demolition and recycling company ACT located in Chennai, contacted PDi Magazine at our booth at the bauma show in April this year. Ramanathan frankly asked us if we were interested in supporting and co-producing the event. We of course said yes. The reasons were simple: PDi Magazine is a truly international magazine for demolition, recycling, remediation, concrete sawing and drilling, concrete floor grinding and polishing and related service and product sectors. Hence Demtech was exactly the kind of event we want to be involved in.

After we agreed to cooperate with organising the event, intensive work with planning and marketing campaigns started with several online meetings, numerous emails and WhatsApp conferences. The Chennai based event and media company, Livewire Media, was hired to assist with planning and practical actions. “We had roughly six months to find sponsoring companies, work out an interesting conference agenda with speakers that both could present the current situation on the construction market in India and what can be expected in the coming five to ten years,” says Mohan Ramanathan concerning the planning of Demtech.

Strong support from the sponsors

Demtech was not only the ever first ever Indian demolition, recycling and remediation event, it was also the place where India’s first demolition association was inaugurated, IDA – Demolition Association. This was also an initiative and long-time dream of Mohan Ramanathan. Six hard working months were faced, involving numerous contacts with potential sponsoring companies and discussions with Indian demolition, recycling and remediation contractors. Ramanathan received almost instantly a positive response from the majority of contractors he talked to, and likewise, the response from the sponsoring companies was almost just as immediate and positive.

Volvo India agreed to be the headline sponsor, with Epiroc, Hilti, Brokk, Aquajet Systems and Sennebogen acting as associate sponsors, whilst Husqvarna, Edifice, Pentruder, Shearcore, Kemroc, Kobelco and Tyrolit were affiliate sponsors. As co-organiser, I wish to express my gratitude to these companies for believing in, and sponsoring the event. Initially it was decided that Demtech should have a rather small exposition area, only with small information booths for the sponsors and table top booths for companies that would only like to present their products with documentation. The interest for the exhibition area was so great that the sponsors’ were also allowed to exhibit actual products. Besides the 13 sponsors, an additional 10 companies wished to participate with table top booths. These consisted of Trevi Benne, Rotar, Demarec, Schwing Stetter, Hydrotec, Philtec E&C PTE ltd, SDT Sanwa, Indo-Spark, Terex and Wirtgen Group. We would like to give a big ‘thank you’ to these companies as well for their support.

The interest from manufacturers, their local operations and contractors, was as mentioned already staggering. We were not sure however how many people would be attending as throughout the summer very few people registered for the conference, either online or by traditional registration. When we approached the beginning of October there were still only around 70 people who had registered, but then something happened, in particular, when the social media campaign commenced. “We really were blasting all social media channels with information about the event and as more and more speakers committed to come, and also additional sponsors and exhibitors, the registered number started to rise, in particular during the last five days before the conference should start. The registered number passed 200 and even on the day before the conference and on the conference day more participants were added so the final number reached 256 registered participants plus invited speakers and guests,” says Livewire’s Thoufeeque Nihal.

The day before the event, IDA had its first committee meeting where all delegates gathered. It was decided that due to the great response that another Demtech would also be arranged in 2020. However, next year a full exhibition area will be set up including room for live demonstrations. It was decided that it will take place in Bangalore at some date and venue yet to be confirmed in November. The IDA board of directors who made these decisions now consists of eight members, who are: Mohan Ramanathan, initiator and chairman of the committee as well as managing director of ACT, Advanced Construction Technologies Pvt. Ltd, Jogar Chedda, partner Edifice, Shiram D. Matte, director of Matte & Associates, Akhil Jain, Jain Engineers & Consultants, Fazrulla Basha, director Abcon Concrete Surgeons Pvt. Ltd., Mohanraj, director Rapid Cutting Technologies India Pvt. Ltd., Kannan Paulthurai, director P. K. Cutting Tech Pvt. Ltd and Piyush Gandhi, director Genesis Engineering.

The Master of Ceremonies for the event was Lipi Goyal, a well-known MC, model and actor in India. Lipi Goyal made excellent work holding all the threads together during the conference day and the gala dinner in the evening, linking, introducing and all in all, being the glue the event required. The event was formally opened by the event’s special guest, special director general CPWD, Usha Batra, who cut the ribbon and then undertook a visit of the exhibitors’ area. Following this, he then made the opening address. The over 300 conference participants were then welcomed by Mohan Ramanathan and PDi’s Jan Hermansson, co-organiser of the event. The opening continued with a blessing ceremony made by Usha Batra, Mohan Ramanathan, Jan Hermansson and delegates of the IDA board committee. The Indian minister of Road & Transports Mr. Nitin Gadkari also sent his best wishes for the event through a video recording.

The conference itself day then commenced with a number of interesting presentations. Dr Gaurac Bhatiani spoke on the subject of the, ‘Indian Construction Economy, today and in the future’.  Bhatiani explained the reasons for the economic situation right now and gave a forecast for the following five to 10 years. Other speakers were Dr. Shailesh Agrawal, executive director of the governmental agency BMPTC, Dr.Vimal Kumar, secretary general C-FARM and Dr. K.N. Sathyanarayanan, director of IIT Thirupathi.

A number of interesting case studies in the demolition and recycling sector were also presented. Uttkarsh Mehta, partner in the company Edifice, made a presentation on the advanced dismantling of the MG Sethu Bridge, whilst Sunilkumar Vishwakarma, head of planning Tata Projects Mumbai,  made a presentation on the making of cross passages in the new Mumbai Metro. Youssef Hallak, head of the Romanian demolition company LT Diamond Cutting, explained decommissioning work undertaken on a nuclear plant in Romania.

After a long day, rich in information, the event was brought to an end following a panel discussion moderated by PDi editor in chief, Jan Hermansson. The panel consisted of Professor N. Gopalakrishnan, Director at CBRI (Roorkee), Mr. Shriram D. Matte, Director at Matte & Associates, Mr. Dimitrov Krishnan, VP & Head Volvo CE India, Dr. K.N. Sathyanarayana, Director at IIT Thirupathi and Subhashis Bash, Marketing Director at Hilti India. This discussion led to a lively debate between the panellists and the audience who contributed questions about India’s potential in terms of extended demolition, recycling and remediation services.

At around 05.30 pm the conference part of the day came to an end. Sometimes conferences lose participants the longer the day goes on with Mohan Ramanathan fearing that this might happen with Demtech. On the contrary, it seemed as if more people joined in the longer the day proceeded. So at 7.30 pm, when the inauguration ceremony of IDA and the gala dinner began, the dining room and exhibition areas were crowded with people! Organisers, sponsors and delegates of the IDA joined together in opening the curtain on the new association which was marked by a rain of confetti and long round of applause from the audience.

The next point on the agenda was a moment where the organisers where brought on stage and thanked. PDi Magazine’s Jan Hermansson thanked Mohan Ramanathan for initiating Demtech and for all his energetic hard work for making the event happen. Each sponsor and exhibiting company was also thanked, as well as the event planner Livewire Media who did a very professional job in general, with particular mention to the design and structure of the event. The evening continued with music from the entertainer Charles Anthony who can sing in more then 10 countries, and an Indian buffet with an open bar. At the end of the party, Mohan Ramanathan even accompanied the musicians in a couple of songs.

Demtech was a true international event with approximately 300 representatives from Indian demolition, recycling and remediation contractors and representatives from manufacturers from around the world. All together people from 18 countries attended the event, with representatives from countries besides India included:  USA, UK, Spain, UAE, Japan, Singapore, Netherlands, Switzerland, Germany, Sweden, Romania, Russia, Austria, Italy, Liechtenstein, China and Saudi Arabia

Demtech India 2019 has given the industry in India a taste and appetite for more of this type of event in India. As mentioned, even before this year’s meeting began it was decided by the IDA committee to organise Demtech India 2020. This will also be in November in Bangalore, with dates and venue to be confirmed. PDi Magazine will keep you posted.