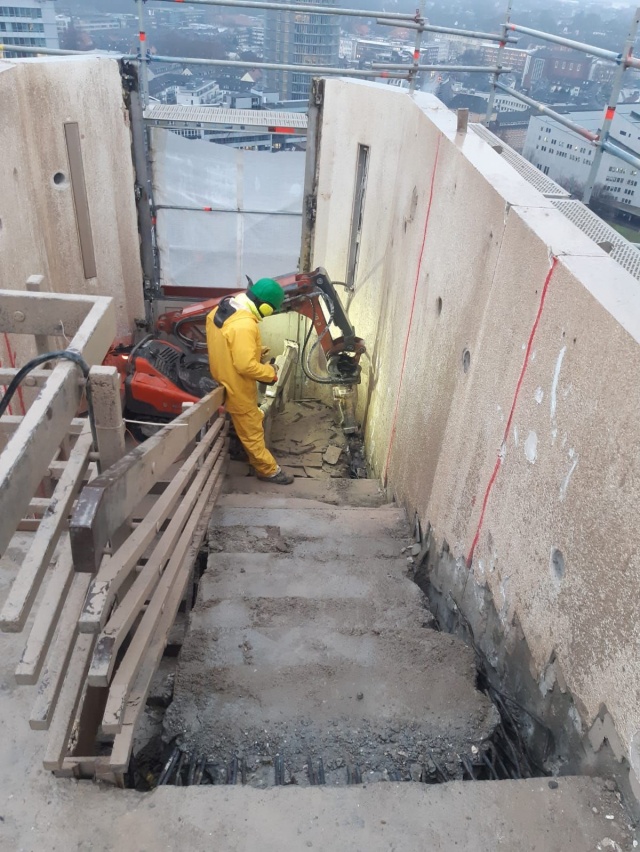 Dismantling on the former RWE site is DGNB certified

The demolition of the former RWE high rise building poses major challenges for BST Becker Sanierungstechnik GmbH from Oberhausen, Germany. Together with the client – Kölbl Kruse GmbH from Essen – the DA member company also wants to set high standards in terms of sustainability and recycling management. In a pilot project, the works were certified by the German Sustainable Building
Council (DGNB), with the aim being to achieve ‘platinum status’.

The former RWE building in Huyssenallee, referred to as the ‘Y-Building’, has shaped Essen’s skyline for four decades. It is now being demolished by BST Becker with the building materials being recovered, not least due to the DGNB certification, set to be used again in new applications. The demolition of the 18 storey, 86m high building and neighbouring buildings, comprises of an area of over 320,000 m3 of enclosed space, presenting challenges, even without recycling. The surrounding area is not only densely populated, but the construction site is also located in direct proximity to a tunnel of the Ruhr expressway A40, whilst the underground car park is adjacent to a subway station, with Essen’s main railway station also located nearby. For the dismantling of the Y-building, a 100m tower crane was erected to transport the dismantled concrete to the ground. The top floors are currently being dismantled using demolition robots and concrete saws whilst parallel to this, the first demolition work on the buildings in the backyard using long front excavators is set to start at the beginning of April.

The demolition of a small block of houses along Dreilindenstrasse is already in progress. The A40 slip road will be temporarily protected by a supporting structure during the demolition phase, but in some cases it must also be completely blocked. To dismantle the pollutant containing facade panels, the building was equipped with around 22,000 m2 of scaffolding and provided with tear resistant foils to prevent building materials from falling off and to protect the environment from dust emissions. Dismantled successively as the building is demolished, the scaffolding also serves as fall protection for the employees. In order to protect against noise, dust and vibrations, a detailed emission control concept has been developed, which includes the use of low noise machines and adequate irrigation.

The entire project is expected to be completed by early 2022, with an average of around 60 employees working on site by then. “In order to be able to carry out the dismantling work professionally within this tight schedule, we rely on the know-how of our employees and our state of the art equipment. In order to be able to guarantee the high quality standards, two foremen are always on duty on the construction site in addition to the project management and the construction management,” explain the two BST managing directors Christian Becker and Michael Pfeiffer.

The requirements of the DGNB certificate, ‘Building Dismantling’, BST Becker Sanierungstechnik GmbH wishes to achieve, also cover such aspects as the remediation of hazardous substances, safety on the construction site or methods for reducing noise or dust emissions. However, according to construction manager Sarah Sinnwell, the focus is on the circular economy: “The focus is on the recycling of raw materials into the building cycle and supporting the recycling process in order to reduce the quantities to be disposed of as much as possible.” The reuse of old components or furnishings also plays a role here resulting in a search for suitable customers. This saw a kitchen being donated to Moldova, whilst the former canteen and other kitchens, washing machines, heavy duty shelves, doors and staircase railings necessitated in other recipients being found.

Even more impressive, according to the company, will be the percentage of concrete produced by demolition from the solid walls of the buildings. Since the beginning of March, an impressive 70,000t have been crushed directly on site to a grain size of between 45mm and 65mm and 100% recycled, in some cases even directly again on site when creating a new embankment. The company’s other tasks for obtaining the certification include disposal as close as possible to the site, as well as separating the building materials by type on site and documenting this separate collection. This high expenditure, is however worthwhile according to managing director Michael Pfeiffer: “We are very proud to be able to participate in one of the first five building sites certified in such a way, therefore we do not shy away from the expenditure and all together we are also quite ambitious and would like to fulfil at least 80% of the DGNB requirement, which would then be platinum status.”