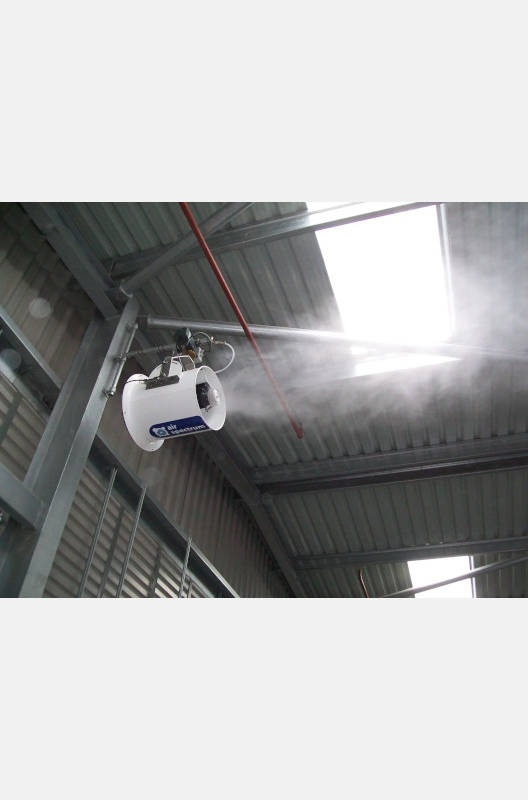 Worksite safety, particularly regarding dangerous airborne particles, continues to be a concern of the industry, with decontamination during the pandemic especially becoming a focus for many. On this theme, this year sees many new products from a variety of manufacturers, including Generac, Dehaco and Raincanon.

B + W is now installing a water meter in all of its water fog systems, enabling the water which is about to be sprayed to be flow monitored. The company says that the key advantage being that leaks in the system are now able to be detected the same way as blocked nozzles are. The consumption of nozzles is monitored by the water meter; thus if leaks occur, the increased water consumption is recorded and the system goes into malfunction thereby conserving water resources. Furthermore, not only is the maximum flow monitored, but also the minimum, which according to B + W, is important for noticing clogged nozzles. If these do not generate a fine water mist, the de-dusting performance is no longer guaranteed. Here, the water meter takes effect again, as if the water throughput falls below the minimum, there is a signal. The company has designed its water nozzles to be low maintenance, being easily cleaned quickly, with the screwed on filter being designed to be loosened with a screwdriver and cleaned under running water.

Generac’s DF15000 and DF20000 provide a cost effective midsize solution to dust. These electric dust suppression units operate with 36kW or 56kW generators that power the electric motors propelling a fine water droplet mist onto the job site up to 130m away. These machines cover 325° of rotation and an area of around 10,000m3 to 30,000m3.  Other features include automatic oscillation, an integrated booster pump for control of water pressure and flow rate, and a control panel for monitoring of pressure, temperature, and flow levels. The DF20000 and DF15000 are highly portable on a compact trailer with a gen-set and optional 4,500l water tank to help solve daily dust control issues. The machines are designed to keep dust particulate down in demolition sites, scrap/recycling yards, mining stockpile areas, aggregate yards and quarries, larger solid waste facilities, ADC applications, landfill odour control, composting facilities, irrigation, livestock management, product storage management, construction sites, power plant pond de-watering and air humidification projects. The models are available to rent or purchase in the United States exclusively from Company Wrench.

Dehaco's dust control units use a rotor instead of nozzles, which, according to Dehaco, prevents two major drawbacks: blockages and excessive water consumption, with dirty water or hoses often leading to blocked nozzles. The opening of these nozzles is a small as the tip of a ballpoint pen, around 0.5mm. This means any object larger than this can block the nozzle. The smallest opening on the DehacoTera is 3mm and any blockages in the water flow can be removed from the rotor, which allows the work to continue uninterrupted, with the system being designed so that the rotor always works regardless of the volume of water. The 400V range of misters spread water droplets with water flow rates of 100, 500, 1,000 or 4,500l/h. The water flow rate does not affect performance and the droplet size can be adjusted. To prevent airborne bacteria such as Legionnaires’ disease, Tera dust control units can be fitted with UV-C lamps. These lamps destroy the bacteria before they reach the rotor. The power and quality of the UV-C light can be measured, with a visual indication given of the performance. Dehaco manufactures a complete range of dust control units, with ranges from 5m to 90m.

The Air Spectrum ‘Ecotech’ range took three years to develop, and is designed to provide a zero emissions functionality, long life battery capability and quiet operation. The recently launched ‘Ecotech Rotary Atomiser’ (RA) dust suppression solution can operate for approximately eight hours on one single battery charge. Using rotary centrifugal energy, the Ecotech can be programmed to provide up to 15m of misting at a variety of droplet sizes, according to the need on site. Like the rest of the Air Spectrum misting range, it is designed to work with the company’s range of non-toxic chemical additives for odour control and disinfection as well as dust control. Its 1,125l bowser tank allows a run time of between six to eight hours, depending on flow rate settings. The ‘Rotary Atomiser Pro’ is the big brother to the ‘Rotary Atomiser Classic’, and it too can be used for dust suppression, odour control and disinfecting. It operates with an on/off switch providing a longer throwing distance of 20m of atomised mist from its 1,125l bowser tank, and is suitable for indoor and outdoor applications. It is available with an 110V or 240V generator. Other solutions by Air Spectrum include the Rotary Atomiser Classic and its fixed position variant, which can be wall mounted or ceiling mounted. They both have a range of 15m to 20m with direct mains water connections.

Operators sometimes mitigate particulate emissions using a sprinkler or hose to saturate a material’s surface. The higher the wind, the more water pressure is required to break through the shear, resulting in greater amounts of water filling the surrounding work area. BossTek states that hoses typically require manual labour, and both sprinklers and hand held hoses contribute to high water bills. Operators of the new ‘DustBoss DB-60 Surge’ are now able to match the water requirements to the application, as BossTek states that the booster pump delivers as much as 27.5bar of water pressure to the centre nozzle, with an output of 140-378 l/pm. The model features water propelled at high velocity from a centre nozzle, combined with a fan and misting ring system. The cannon uses jets that surge through the wind for over 76.2m to suppress surface and airborne dust.

The system combines the power of an industrial fan, misting ring and heavy duty barrel with the reach and force of a central high pressure spray nozzle. The pressurized spray resists wind shear and uses the force of the wind to fragment and carry the droplets. The first stage in the three stage system is suited for moderate days for airborne and surface coverage. It uses the 30,000cfm (849.5cmm) fan and misting ring to deliver fine atomised mist droplets. For windy days, stage two features a pressurized stream delivered by the central nozzle. On high wind days, operators can utilise the fan, misting ring and centre nozzle. The versatility and coverage area is extended with the 359º horizontal oscillation range and 0-50º vertical throw angle. The operator can raise the spray angle and direct the 76m spray for high reach applications. The oscillation range is controlled with the remote control. It can run potable or non-potable water, as it is equipped with two inline 30mesh, 595micron filters.

Chromate is a widely used surface coating in machine designs. Its benefits include good gliding characteristics, corrosion resistance, and good durability. It has been used in the industry for a long time, and it became an industry standard for protecting and hardening surfaces. The chromate surface will not cause any harm to the user or environment when it is on the product although the coating process does as producing coatings that include Cr6+ chrome are carcinogenic and hazardous to health and the environment. Since 2017, making a coating that includes Cr6+ needs a permit and is highly regulated. Dynaset HPW hydraulic high pressure water pumps’ central body deals with high oil pressures, and the pump requires hard surfaces to withstand these pressures and also, as we are talking about piston and cylinder elements, it means the friction needs to be as low as possible between them. This is the reason why chromate has been used in the past. However, Dynaset has now decided to change the surface coating in its pump centre bodies. The new Cr6+ free surface coating will now be used in HPW800, HPW1000, and HPW1600 pump model centre bodies. The new coating has good gliding and corrosion resistance properties just like its predecessor, and it is also hard enough to withstand the pressures in the unit, according to Dynaset. The new surface coating has good gliding properties, which will increase the seals’ durability.

WLP Systems has introduced the new Demolitor (D) 70, an upgraded version of the previous model that now adopts a design in line with the models of the Demolitor family. The water pump is no longer external, but a submersible type integrated into the frame, which acts as a reservoir. This configuration guarantees half the power consumption compared to an external pump, according to WLP, plus the advantage that the cannon has a more compact design. The new ducted fan system integrates a fan with side tips, and a renewed design of the flow rectifiers is said to guarantee up to 60m of jet with 11kW of installed power. The swing is freely programmable, covering a spray arc of 360°, and thanks to the new mechanical gearbox with operating lever, the machine can also be rotated manually without the need for electricity. The new D70 is equipped with a main solenoid valve with integrated filter, which is easy to maintain and ensures that the cannon can be used either from a tank water supply or from a pressurised line. Like all WLP machines, the D70 is also equipped with a radio control for remote and safe operation.