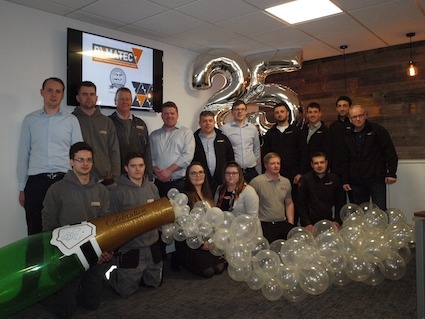 2019 is shaping up to be a huge year for Dymatec, the leading manufacturer and supplier of diamond drilling and concrete cutting consumables. Not only is it the firm’s 25th anniversary, it has also announced significant developments across both its company operations and product range.

Cutting it for 25 years

On 15th March 1994, Dymatec cautiously opened its doors to the drilling and sawing market, not knowing whether there was much potential, nor how the products would be received. The aim was to be a supplier with an unparalleled level of service that was identified as key to the company’s growth. In 2000, the company moved into a new purpose built facility investing in its first production equipment, providing the opportunity to produce diamond tools to its own specification, meeting the specific demands of its growing customer base.

As part of further expansion and growth, Dymatec moved into larger premises in 2018, having outgrown its previous space, and set about a significant refurbishment project to transform the space into contemporary offices with meeting rooms alongside an increased production and storage facility. Jeremy Newton, managing director of Dymatec said: “Today, we look back and reflect on 25 years that has made Dymatec the company it is today. We would humbly acknowledge that the key factor has been the loyalty of so many great customers who have trod this path of development with us. We would like to say a huge thank you to each and every one.”

Dymatec launches into US market

Following extensive product testing, Dymatec officially began operations in the US market in February 2019 with the opening of Dymatec USA LLC located in Florida. Over the past two years, Dymatec has tested its diamond products in a variety of areas, on different aggregates, throughout the country, and directly with professional drilling and sawing contractors. Based on the positive and rewarding results seen in the testing, Dymatec committed fully to the US market earlier this year with the opening of its Florida headquarters, and on the ground staff covering both sales and day to day administration.

Dymatec products are also held in stock in Tennessee, with the company aiming to have its new distribution hub in the mid-west operational by the middle of 2019. Jeremy Newton, said of these developments: “We have seen a fantastic response to the launch of Dymatec in the US, and this further development in terms of our distribution hub is already being welcomed by many customers who appreciate a fast response time for orders. Combined with our experienced ‘on the ground’ sales team, the US market can expect a comprehensive service from Dymatec that is hard to beat.”

Dymatec has also expanded its in house laser production capabilities with the installation of new blade and core laser manufacturing equipment. The new laser welding production machinery will focus on the manufacture of Dymatec’s SDF blades, Turbo S and Turbo B core drills, with enhanced output capabilities to help meet the growing and significant demand for these superior diamond consumables.

Dymatec’s enhanced production capability is now offering: diamond core bits from 10mm up to 1,500mm, and diamond blades from 105mm up to 2,200mm. All products can be made in a wide variety of thicknesses and segment specifications for even the most demanding aggregates anywhere in the world. All Dymatec’s superior diamond blades feature unique SDF layered innovation. This latest improvement to Dymatec’s advanced manufacturing facility ensures the continued consolidation of its position within the global diamond tool industry, allowing it to respond quickly and efficiently to industry needs.