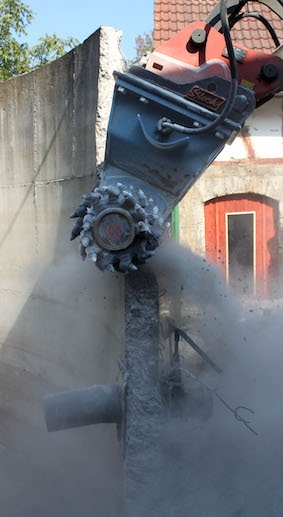 The cesspit in Nesselbach is no longer needed, and displaying high levels of power and speed, the Rockwheel D15 has ground through its 200m concrete walls. Only the untouched back wall and the ground material the size of pebbles was left, with the latter material being then used on site to form the foundations of a new development.

Only a small part of the Nesselbach cesspit was required to remain in place, as this formed the retaining wall for the property next door, which is on a higher level. This required a vibration free demolition of the cesspit to avoid shock loads going to the retaining wall which could cause cracks, making it an ideal job for a Rockhweel. With low vibrations, efficient performance and high levels of power, the drums with carbide tips have ground through the concrete, with even the 6mm concrete reinforcement being dealt with. After only two hours, the job was completed and all involved satisfied with the outcome.

The Rockwheel D15 power pack comes with 41kW hydraulic power and is designed to work on excavators between 12t and 18t. As with all Rockwheels, it easily cuts reinforced concrete. With massive end to end hardox plates and carbide picks, the robust equipment is nearly indestructible. Furthermore it cuts material to pebble size making the processed material easily transported or used on site. Rockwheel operations are low noise and fulfil the requirements and guidelines for work tools operating in town centres and residential areas. Low vibrations and low noise levels also protect both excavator and operator.

Rokla GmbH in Langenburg has been building cutting units under the Rockwheel brand since April 2013. The team includes the British designer Ian Webster, who 25 years ago developed the technology for these hydraulic cutting units. Webster brings innovation and superior technology to Rokla, with production being handled in Langenburg. Worldwide sales, production and service are under the direction of the two company founders: Robert Piasecki and Klaus Volkert (senior employees at Terex until 2013). With the greatest experience in the market in the field of hydraulic cutting units, and new innovative technology, Rokla has set new standards, now being considered to be a worldwide technology market leader.