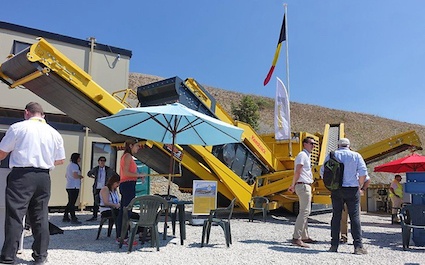 Electrifying premiere for Keestrack at Hillhead 2018

“We were really impressed by the large international attendance at this year’s show,” says Michael Brookshaw, Keestrack’s global distributor manager. “We met numerous expert visitors from all over Europe, and our overseas market regions including Americas and Asia.”

The fully hybrid H4e cone crusher emphasises Keestrack’s philosophy of flexible mobility and productivity. Even with its optional three deck hanging screen, the fully equipped plant weighs only 46t (without options, 35t), providing ‘one piece’ road transport and fast relocation on site. For flexible autonomous operation, the H4e is equipped with a 345kW (EU-IV) / 328kW fixed speed (EU-IIIA) on board diesel engine. The engine drives a 330kVa alternator, providing power to the 132kW electric motor of the crusher drive, and to the separate 45kW E motor/pump unit for all hydraulic drives on the plant. Without starting the diesel, this setup enables the plant to operate fully ‘plug in’ from mains or external gen set, resulting in energy cost savings up to 70% compared to conventional diesel-hydraulic plants. As an option, the H4e diesel/alternator combination is available as detachable drop off unit which may be remotely positioned during operation.

The H4e features the KT-H4 cone crusher, adapted and supplied by a world leading cone specialist, with the fully automated unit producing up to 250tph at maximum feed sizes of 185mm. The wide variety of concaves enables high flexibility in secondary or tertiary production of highly defined end fractions. To optimise production, the plant can be optionally equipped with a pre-screen with fines chute, and with a highly efficient three deck secondary screen module with recycling conveyor for closed circuit processing. The large dimensioning of the hanging screen (3x5.4 m²), and large stockpiling capacities of the conveyors, prevent bottle neck effects in producing up to four highly defined quality end fractions.