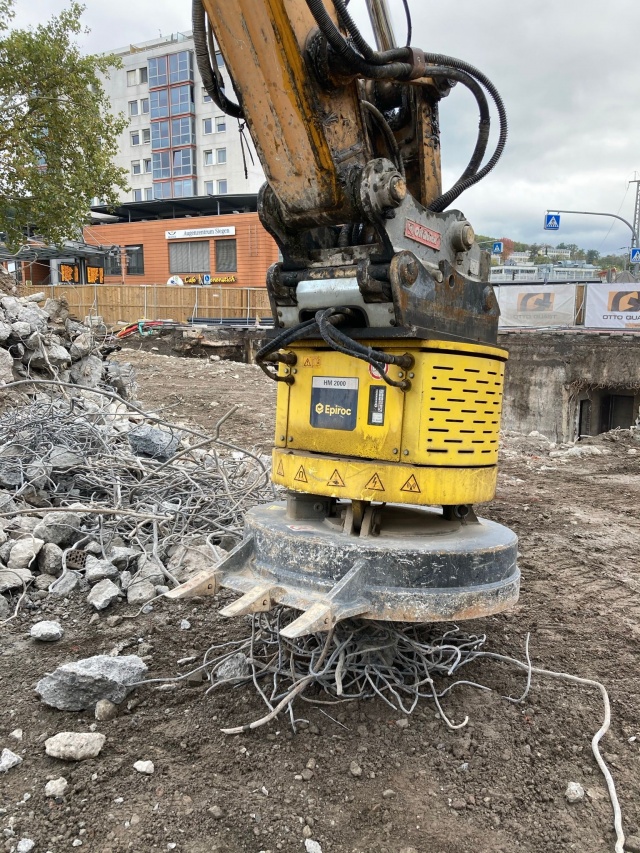 During the demolition in Siegen, a deep bunker from the 1930s had to be demolished in order to carry out the planned development with commercial and residential units on a site of around 4,000 m2 in the middle of the city centre.

The 75 year old Siegen based construction company, Otto Quast, took on the sometimes challenging demolition of reinforced concrete walls of almost 2m, trusting Epiroc and Erkat equipment. The latter’s robust, high quality drum cutters are known for their efficient, yet very low vibration and quiet operation, attributes which were essential due to the central location near the Siegen bus and train stations which are also surrounded by apartments and commercial areas.

The demolition of the underground bunker system made of reinforced concrete, comprised of a total of 2,300m3 of area, and had to be carried out in separate construction phases, with Epiroc and Erkat equipment being involved in each and every one of them over a working period of around six weeks. In order to weaken the ceiling and wall structure, ER 1500 and ER 2000 transverse drum cutters mounted on Liebherr 946 and Komatsu PC240 excavators reduced 1.8m material down to 1m. Despite this taxing and demanding work, low vibration and low noise were essential at all times, with integrated water spraying equipment also ensuring dust binding whilst providing protection from airborne particles.

The demolition of the weakened bunker structure was then carried out by the new Epiroc CB 4500 ‘concrete buster’, which made a short work of the walls with its jaw width of approx. 1.4m. The HB 3100 hydraulic breaker was then successfully used for the final demolition of the base plate. For final clean-up work, a BP 3050 R ‘bulk pulveriser’ carried out the additional reduction of the construction waste, while a HM 2000 F magnet took over removing metal components.

The bunker demolition work demonstrated the attributes of the Epiroc and Erkat products and showed why the high quality drum cutter units are often better suited than any other attachment tool for such demanding demolition work in sensitive areas, with performance, reliability and quality speaking for themselves. Minimal maintenance, quick pick changes and cutting heads with replaceable wear parts prolong service life and help to keep operating costs low.  Furthermore during the demolition Epiroc and Erkat supported Quast’s operations, helping to select the right equipment and coordinate work.