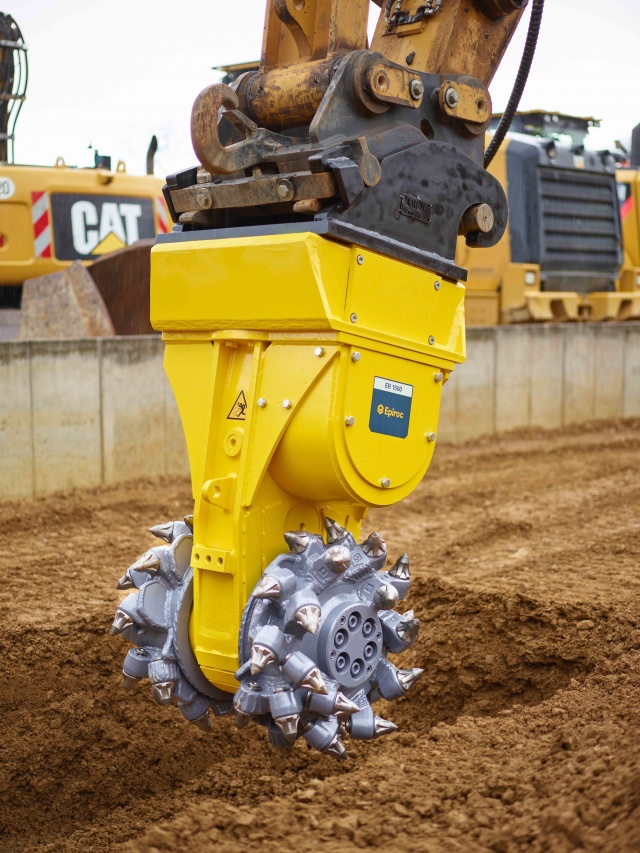 The Oettinger Group required a powerful attachment for the partial demolition of a former public administration building with integrated air raid shelter in Karlsruhe, Germany. The buildings comprised 18,000 m³ of enclosed space and 4,000t of reinforced concrete material. Initially gutting and remediation work was carried out with the aid of a MG 5000 ‘Multi Grapple’. This was followed by the demolition of a connecting bridge and the public building, including the heavily reinforced air raid shelter. CC 5000 demolition cutters were used for the above ground demolition. The walls had been pre-slit with a HB 4700 hydraulic hammer and were finally cut out with the new CB 5500 Concrete Buster and prepared for pulverisation.

Experienced machine operator Marius Mayer valued the power and precision of the new Epiroc development: “The CB 5500 is designed for heavy duty assignments and is ideally suited to breaking the structures of thick reinforced concrete walls, trusses, beams and foundations. The tip penetrates the concrete vigorously and ‘bursts’ it from inside. Areas of application include industrial demolition or inner city demolition where vibration is to be avoided. The benefits are particularly evident in the demolition of foundations. Because of its construction and its huge jaw width, the CB 5500 enables me to crack even foundations made of the hardest concrete. The work cycles are fast and the capacity of the shears is outstanding.”

The ‘Concrete Buster’ product range has recently been extended to include the CB 5500 and CB 7500 and now includes six models with operating weights from 320kg to 7,400kg for excavators ranging from 2t to 85t. They have been specially developed for heavy foundation work and are particularly suitable for demolition with long front excavators and in areas where a hydraulic hammer cannot be used.

The CB 5500 is designed for carriers ranging from 50t to 65t, and has a jaw width of 1,600mm and depth is 1,060mm. It features impressive opening and closing times of 4.1 and 3.5 seconds respectively, as well as a cutting force of 150t at the jaw tip. Short working cycles are made possible by the built-in rapid motion valve. These performance parameters, and the associated increased efficiency, were decisive for Oettinger, with the concrete demolition cutter being particularly impressive in test operation and therefore immediately adopted by the Oettinger Group. Managing director Robert Oettinger summarises: “With the CB 5500 we have added a very good machine to our fleet, a machine that is outstanding for its size.”