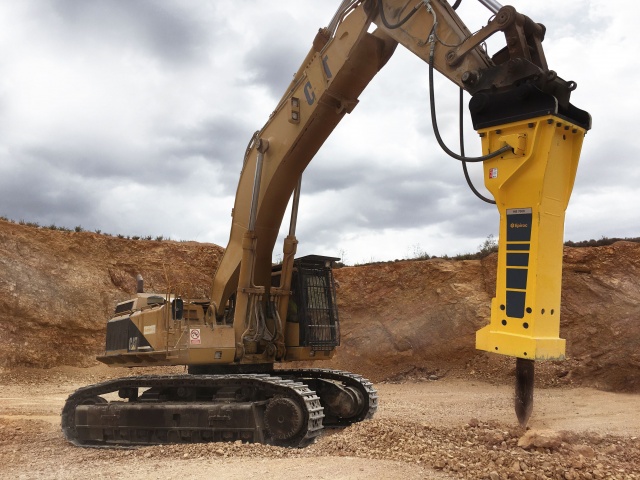 The Son Amat quarry is located on the Spanish island of Mallorca, with a long history and deep roots in the region. With an emphasis on safety, the quarry now uses the Epiroc HB 7000 DP hydraulic breaker, purchased from Epiroc’s official specialist dealer Cohimaop.

Son Amat is a major and important aggregate supplier for the construction industry on Mallorca.  The quarry is located in the Porreras area, near Palma de Mallorca, and is one of the largest and most important on the island.  It was founded back in 1875, with the company's long history being a clear indication of its forward looking management.

Son Amat needed a different solution due to the geographical location of the Balearic Islands and the problems associated with drilling and blasting in quarries there. Fault free processes and optimal utilisation of the quarry were the goals the Epiroc Iberia team and its dealer were set. After a thorough analysis of the conditions in the quarry, it was concluded that the HB 7000 DP hydraulic breaker was the best solution for material extraction, as it is more flexible to use than drilling and blasting at the quarry. “We were very careful when it came to putting together the right setup for this particular application, as we want to achieve the best possible result. The HB 7000 DP is impressive when dealing with the toughest rock and is undoubtedly the best tool for this project,” says Manuel Morcillo, managing director of Cohimaop A.G.

Among other things, the HB 7000 hydraulic breaker opens up previously unused areas in the quarry requiring the machine to handle both limestone and its natural weathering.  The HB 7000 has not disappointed and has met all expectations with its high impact force and the optimal per/min impact rate, which increases productivity as well as working comparatively quietly and with low vibration levels.

IPS system and other features

The HB range of Epiroc hydraulic breaker offers models suitable for carriers from 22t to 140t.  They use the exclusive ‘Intelligent Protection System’ (IPS) that combines Epiroc's well known ‘AutoControl’ and ‘StartSelect’ functions, automatically adapting the working method of the breaker to any working conditions.  Thanks to the IPS system, the hydraulic breaker can be positioned in the fastest and most precise way. Ineffective blows, which could damage the attachment, can also be prevented. Thanks to the IPS system, which does not require any manual intervention, the operating time of the equipment is optimised with no interruptions in the workflow.