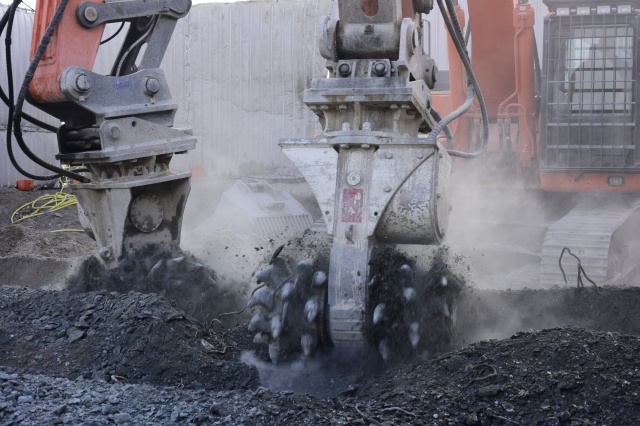 Erkat’s drum cutter units are currently being used for the demolition of a high rise bunker in Hamburg Eimsbüttel, which required low vibrations but efficient demolition performance with quick tool replacement.

Around 50 above ground high rise bunkers dating from WW2 still dominate the city scape OF Hamburg. They are now gradually being demolished to create new living space in highly coveted parts of the city, with the bunker in Eimsbüttelerstraße, soon to be replaced by an apartment block. The demolition alone is an extremely expensive process and is being carried out by specialists from Abbruch und Verwertungsgesellschaft Nord GmbH (AVG Nord). They have developed a special process for ‘gentle’, selective demolition, where emissions levels are kept significantly lower than with conventional demolition methods, such as using breakers.

Two Erkat transverse drum cutters (ER1500 and ER2000) are mounted on Doosan DX340 crawler excavators which are being used to demolish the high rise bunker. As the work is being carried out in stages from top to bottom, the machines were initially lifted onto the bunker roof by a 220t mobile crane. Thanks to their robust design and high resistance capabilities, each drum cutter can demolish around 3m3 of reinforced concrete per/h, and with a total volume of 4,500m3, the work is estimated to take several months. This hard and demanding work means that the picks on each drum cutter are checked for signs of wear every 20min, with daily usage being around 30 units. This process is made easier as the efficient Erkat-Quicksnap safety mechanism is user friendly and enables quick and easy pick changes.

While the noise levels are kept in check during this project by the specially designed protective walls, potential vibrations are a major concern. Due to the close proximity of neighbouring buildings (0.7m) and the difficult ground conditions (sand, clay, peat and a high proportion of water), vibrations can be easily transferred. The Erkat drum cutters work quietly and with low vibration levels, making them suitable for use in sensitive areas. Minimal maintenance, quick pick changes and cutting heads with replaceable wear parts prolong the service life and help to keep operating costs low, making the drum cutters ideal tools for the Hamburg bunker project.