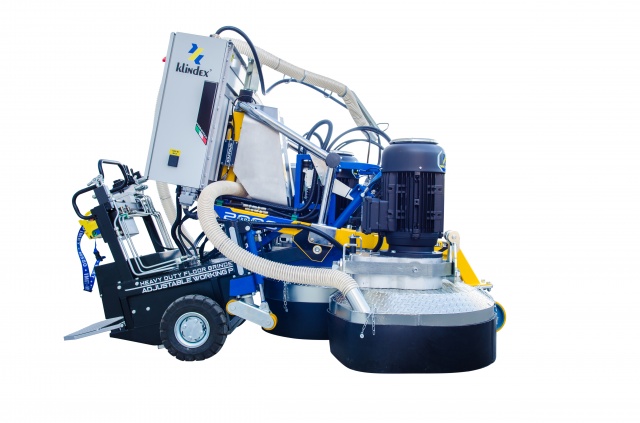 The new Klindex Expander 2000 RX/AT is said by the company to be a remarkable product. It is not only powerful but also smart, working almost like robot completely on its own.

The Italian manufacturer of machines and tools for concrete floor preparation, Klindex, is now promoting it new ‘Expander 2000 RX/AT’. It is a radio controlled professional grinding machine with three planetary heads, working pressure control, integrated batteries for autonomous transport and an autopilot grinding system. This modern floor grinder is said to redefine the terms of saving time and labour by helping to deliver greater profitability. Expander 2000 is the biggest Klindex floor grinder and is a concentrate of technology developed by the company during its long history. It contains numerous technical solutions that provide high levels of performance and reliability, as well as intelligent systems to increase ease of use by the operator. The floor grinder with its impressive performance is at the same time easy to transport and use.

Advantages of the Expander 2000 RX/AT

Expander 2000 RX/AT is remote controlled and available with an autopilot grinding system. It is designed for excellent manoeuvrability and agility. The machine’s steel gear transmission is thermos hardened with no belt to break. It has integrated batteries for independent handling and operation. The working pressure is electronically adjustable whilst the tilting of the planetary is automatic for quick and easy tool change. Expander 2000 RX/AT has the ability to work with three, two or with a single head. In total the three grinding heads have a combined total of nine satellites with a diameter of 240mm each with ‘Ready Cool’ or ‘Quick Attack’ systems. The satellites have special anti-shock joints that protect all moving parts in the event of an accidental impact such as an iron rod.

The quick head release system allows the operator to easily choose, according to needs, whether to work with a three, two or a single head. This intelligent function not only increases the machine’s working time, but also cancels downtime due to normal maintenance operations. For example, a single planetary head can be serviced while Expander 2000 works with two heads. The quick head release system also allows the Expander 2000 to be transported easily by standard commercial vans.  The built in batteries of the traction motors move the Expander 2000 independently, with handling on site or loading on the van ramp, made easy and without effort for the operator who controls everything by remote control. Furthermore, a removable third front wheel reduces the machine’s bulk.

Klindex has developed a new and exclusive technology of remote automatic control for grinding and polishing machines. With this system called ‘AT’ (Auto Pilot), Klindex machines can grind on their own the entire area moving forward, turning and coming back, crossing the grinding tracks leaving no untreated parts. Without any interruption, it is also possible to modify all the variables of the machine with a comfortable, handy and intuitive remote control.

Expander 2000 is equipped with the new AT, as the technology simplifies many things while working with the machine, including the automatic planetary lifting with remote control as well as automatic swing and a reverse function. It makes transportation easier and offers greater driving power. Furthermore, the Expander 2000 design offers automatic grinding of the whole working surface as well as precision edge grinding providing a machine with high levels of manoeuvrability.

Expander 2000 is equipped with three powerful motors of 20hp each (60hp in total) and the three heads measure Ø750mm each. Hydraulic pistons allow that overturning the planetary heads will be quick and easily accomplished by operating a lever. Tool change is also safe, fast and effortless for the operator. The autopilot system makes the machine able to grind the entire working area on its own. All the operator has to do is set up the autopilot system from the remote control and Expander 2000 will do the job itself.

The machine has metal dust conveyors with a three in one hose connection to the standard vacuum system. Expander 2000 is equipped with an automatic nebulizer or sprayer with adjustable intermittence as standard, thus being suitable for water processing. The third front wheel simplifies transportation and can be used on very soft floors to allow the Expander 2000 to discharge pressure.

It has also powerful LED lights which makes it suitable to work in low light situations. Expander 2000 has autonomous handling even when over tuned, which means that even in the tool change position Expander2000 can be moved forward or backward. This function makes the operation of the machine even more user friendly.