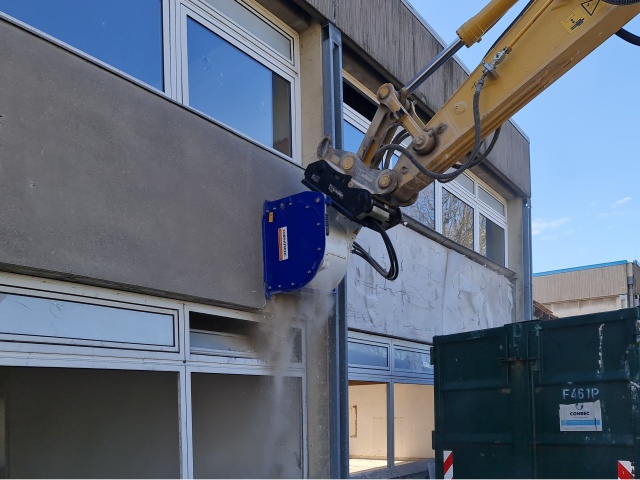 One part of the renovation process of a school in Giessen (Germany) was to replace the building’s façade. As the reinforced concrete shell could not be removed by hand, Leinweber, a construction and demolition company rented a Kemroc EX 60 HD milling attachment for its excavator.

With this combination of equipment, the building’s outer shell was removed with precision and many times faster than would have been possible by hand.

The Giessen-West primary school in the city of Giessen (Hesse, Germany) is being thoroughly rebuilt and renovated. The aim is to bring the building, which was built using a reinforced concrete skeleton construction in 1971, to modern functionality and energy standards. To do this, the building had to be taken back to an empty shell. After gutting out the building, the next task was to remove the reinforced concrete façade. This consisted of a 4cm thick insulation panel sandwiched between two layers of reinforced concrete, one 6cm – 7cm thick and the other 15cm thick. In the original plan, the first step was to release each individual panel from their supporting anchors by hand and then lift them off with a crane. However, this turned out to be impossible. The contractor Willi Leinweber Transport GmbH & Co. KG decided to try removing the outer shell using a hydraulic excavator with a surface milling attachment. The dispatcher Jens Bayer therefor rented a Kemroc EX 60 HD surface milling attachment to match the company's own large excavator.

The Kemroc ‘EX’ range of surface milling attachments is used to repair asphalt or to mill horizontal, vertical, or inclined concrete and screed surfaces. They can even be used for overhead applications – for example in tunnel construction or renovating ceilings in buildings. The attachments have mechanical or hydraulically adjustable depth adjustment. This makes it possible to mill defined layers with millimeter precision. Milling drums can be equipped with different tooling, depending on the material to be milled.

The range of services offered by Leinweber, based in Fulda in Hesse, include demolition and earthworks, transport as well as recycling and raw material extraction. For the project at the primary school building in Giessen, Kemroc sales manager Enrico Trender in consultation with dispatcher Jens Bayer decided to use an EX 60 HD surface milling attachment with concrete chisels for use on the company's own large excavator as the carrier vehicle. With this combination of equipment, it was possible to detach the outer concrete shell from the insulation layer as required and to dispose of the milled material. Jens Bayer said, “We have had positive experience using Kemroc rental milling machines in some previous projects; for example in sewer and earthworks construction or surface renovations. Therefor it made sense to use a Kemroc rental machine for this application as well.”

Civil engineer Thorsten Staaden, the project manager for Herzig Architekten at this public funded renovation project, commented on the milling operation: “The entire façade area was around 1,500m² in size. The excavator was able to reach around 1,000m² of the façade without dealing with obstacles, and in this area the removal rate was certainly ten times faster than conventional manual work.” A major advantage over the use of a hydraulic breaker was the ability to remove layer by layer and separate the materials for disposal as well as creating low levels of dust. Thorsten stated, “In the future, I will recommend the milling of old façade layers as the preferred method in future building renovation projects.”