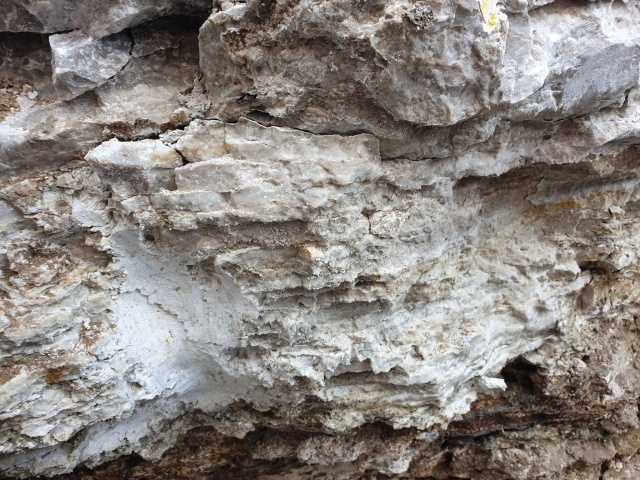 While excavating a trench at Steinsfeld-Endsee in Franconia (Germany), the contractor Leonhard Weiss had to work through deposits of gypsum.

A Kemroc EK140_1000 chain cutter was used for installing a new waste water drainage system, enabling the project to be completed in time and within budget.

The municipality of Steinsfeld in central Franconia, Germany are making extensive renovations to its infrastructure. As part of the renovation work along the main road in the suburb of Endsee, it was decided to replace the existing mixed water sewer with a rainwater drain and a new, separate, waste water sewer. The laying of the DN200 and DN250 specification pipes was entrusted to contractor Leonhard Weiss which had to excavate through difficult ground conditions. This consisted of loose soils containing in places deposits of gypsum down to depths of 4.5m. Under these conditions, the estimated performance for excavating the trench with a conventional, double head drum cutter attachment on a hydraulic excavator didn’t appear to meet the levels required. However, the site foreman, Rainer Walch had previous experience of using a chain cutter while excavating trenches. For this reason the site manager, Martin Fuchs, decided to use a chain cutter on this project.

A patented Kemroc chain cutter was used, with this being a drum cutter with a chain fitted with cutting tools that runs between the two drums at each side of the cutter head. The chain cuts the material away from the space between the two cutter drums. With a conventional drum cutter, this can only be achieved by slewing the drum cutter with the excavator while it is cutting, or the material is removed at a later stage with a different excavator attachment. Alternatively, the chain cutter can excavate a trench without the need for slewing while producing a profile with straight, vertical side walls to an exact width.

Excavating trenches to an exact width without over break saves time and money as no energy or time is wasted in breaking unwanted material, cleaning extra material out of the trench, or backfilling a trench that is larger than necessary. For Martin Fuchs there was another advantage in using the chain cutter; “Slewing a standard drum cutter side to side between the trench supports would have been difficult and potentially dangerous. Overall, using the chain cutter proved to be better for both the operator and the equipment.”

At the beginning of December 2019, trenching through ground containing irregular outcrops of gypsum was in full swing. The estimated time for completion of the trench using the EK 140_1000 chain cutter (1m cutting width) mounted on a 32t excavator was another two weeks. In an interim report on the performance of the chain cutter, Martin Fuchs commented: “Because the ground conditions are so variable, it is impossible to give accurate production figures for the chain cutter attachment and excavator combination. However, the simplified operating procedure requiring no slewing of the excavator, gave us a noticeable time advantage. At a section of the trench where we were going through gypsum to a depth of 4.5m, we achieved an advance of 5m per day which was definitely 20% faster than we would have achieved with a traditional drum cutter.”

On completion of the section, the contractor was due to continue trenching in the side streets. Here gypsum deposits were also encountered along the proposed route for the trenches. Regarding completing works in May 2020, Martin Fuchs commented, “In those critical locations we have also been continuing using the chain cutter. So far we have been carrying out our work with the fine results we had expected.”