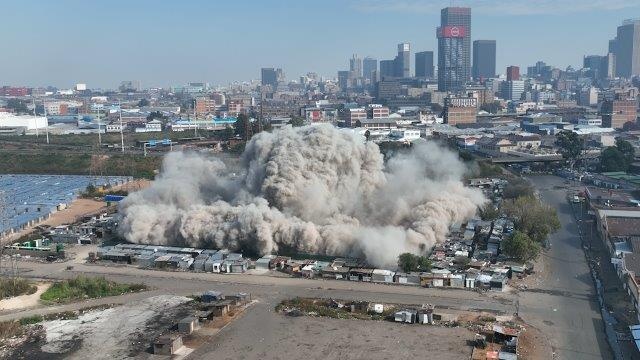 It took only four seconds and 783 non electronic detonators to bring about the successful implosion of the Kaserne building in downtown Johannesburg in May, bringing to a close the former administration nerve centre of South Africa’s vast rail network.

Donated to the City of Johannesburg (CoJ) around 1999, Johannesburg Department of Housing condemned the Kaserne building last year because of structural damage caused by a fire. The implosion was undertaken by Phoenecian Group, appointed by Johannesburg Social Housing Company (JOSCHO), an entity of the CoJ. It worked under Mbongiseni General Services cc to implode the five storey building and prepare the site for its proposed redevelopment.

The demolition experts had to conduct minimal ‘soft’ work within the building itself from a structural perspective. This included pre-weakening certain structural elements, such as the lift shafts and stairwells, to ensure the successful implosion on the day.

After the implosion, the Phoenecian bulk earthworks division broke the rubble down further so it can be reused as a platform substrate for the next stage of the overall development of the site for affordable housing and commercial development.

Clean drop of a dirty building

Preparations for the demolition of the five storey building were like any other except for one new element – the decontamination of the building prior to its destruction. The building had been taken over by ‘residents’ who had made it home for two decades. Unsuited to habitation, 600t of human waste and other litter created a potentially toxic environment. This meant that the Phoenecian Group had to send in a team to prepare it for demolition using Bobcats driven by drivers wearing hazmat clothing, similar to an asbestos removal operation, in order to clear out the tons of waste.

Every major South African city has a similar problem with abandoned buildings of various heights that have been invaded by people who have set up home, irrespective of whether the buildings were for residential, office or for any other commercial use. They are ageing and unmaintained so have no electricity or toilets or washing facilities and will at some point require demolition. The problem was increased during civil unrest in the country last year – mainly in Johannesburg and Durban – with much looting and the setting on fire of buildings. A spokesperson for Atomic Demolition in Durban cautioned at the time that a problem of handling an affected building for demolition was the presence of dangerous substances such as rotting food and waste.