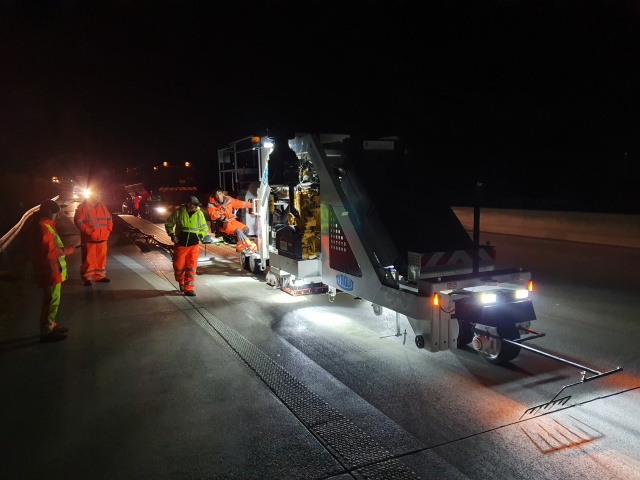 German premiere of the PC4504CE ‘bump grinder’ exceeds all expectations

In autumn 2019, a total of 52,000 m2 of concrete pavement was ground off the A8 motorway between the Dasing and Dachau/Fürstenfeldbruck junctions in order to improve the grip of the surface. The work was carried out by Silco Tec Umweltschutzsysteme GmbH, which was able to complete the entire grinding work within the specified construction time of just six weeks.

For this job, the PC4504CE bump grinder was used for the very first time in Germany. This is a self-propelled machine for the surface treatment of asphalt and concrete, originally produced by the American Tyrolit subsidiary Diamond Products Ltd. In order to meet the legal requirements and directives of the European market, the American original was adapted in advance to the local conditions in close cooperation between Tyrolit and Lissmac Maschinenbau GmbH.

All grinding work was carried out at night while the roadway was in operation during the day, with some lanes being temporarily closed. During the cutting, the CE certified PC4504CE then went to work. The 9m long machine has a 1.27m wide blade shaft, which was specially equipped for the project with a total of 245 BGX-C3 ‘Premium’ diamond saw blades featuring TGD technology with a diameter of 485mm. This resulted in the delivery of an optimal grinding pattern with clean cut edges. The slurry extraction system also worked flawlessly, which meant that the usual and time consuming cleaning of the road surface using a sweeper was not necessary.

The special highlight, however, was the traverse speed, which achieved up to 14m/min when the blade shaft was fully loaded and thus exceeded all expectations, despite the strength of the concrete surface. As a result, Silco Tec Umweltschutzsysteme GmbH not only made extremely rapid progress, but the project was actually completed even faster than originally planned.