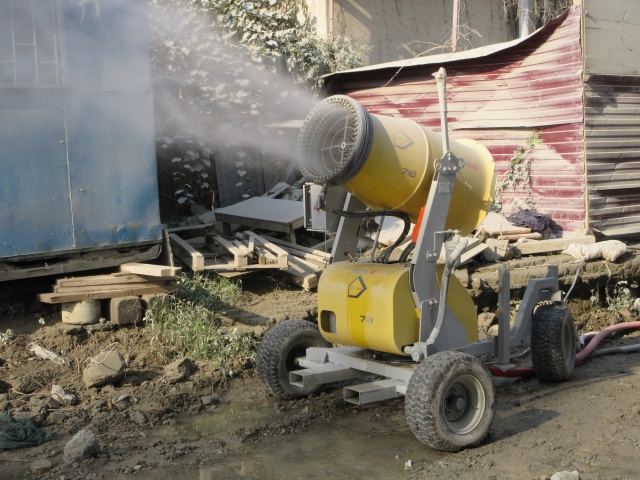 Hydraram’s HDS-718 in action in Russia

The strict dust pollution requirements in the city of Adler made the demolition company Technoservice turn to Hydraram’s HDS-718, a trailer dust suppression system that can create water fog up to a distance of 80-90m.

Hydraram is represented worldwide through an extensive network of partners and dealers. For the Russian market, the company Anbau is the company’s representative with its headquarters in Moscow. In the summer of 2019, Krasnodar based Technoservice turned to Anbau seeking a Hydraram dust suppression system. The machine in question was the HDS-718 mounted on a wheeled trailer, making it mobile and easy to use.

Technoservice, which specialises in building demolition, has six demolition excavators, each weighing 35t, which were to be used to demolish a large facility in the city of Adler located on the Black Sea coast. Here the company faced strict requirements to minimise dust pollution, which Technoservice had to immediately take into consideration. In order to do this Anbau was able to supply a HDS-718 Trailer dust suppression system with optional accessories, including electric water pump, ergonomic multifunctional radio command and the trailer itself. This particular dust suppressor creates a water fog at a distance of 80-90m, which makes it one of the most effective and powerful systems Hydraram can offer.  The machine was supplied by the Dutch manufacturer one month later and delivered a week later to Technoservice in Adler, Russia.

The managing director of Technoservice said of the HDS-718 trailer mounted dust suppression system: “The first time I came across this machine on the internet, I was really impressed and interested in learning more about it, since it was relevant to one of our newest projects. I began to look for official Hydraram partners in Russia and discovered Anbau, the Russian distributor of Hydraram products and services. At bauma 2019 in Germany, I got a chance to view the Hydraram booth and see the HDS-718 Trailer machine. I realised that it was exactly what we needed.

“Shortly after that, I decided to make the purchase. I was already familiar with the way this machine works, but once I saw it in action, its effectiveness exceeded all of my expectations as it created a water fog of almost 100m and washed the dust away like it was never there. Our team was so pleased with the results and performance of the HDS-718 Trailer dust suppression system that we decided to further research Hydraram machines. After consulting with Hydraram, our final decision was to invest in a pair of MK-20 multiprocessors and HMG-T1300 hydraulic magnet. I would definitely recommend Hydraram to anyone who is looking for long lasting, high quality and easy to maintain hydraulic excavator attachments!”

Hydraram was founded in 1993 mainly selling its products in the Netherlands. Exporting began in earnest in 2000, and since 2004 the company has developed an international dealer network. In 2005, it opened its first German branch office to provide support to German dealers and in 2018 celebrated its 25th anniversary. Over these 25 years, Hydraram has focused on a reliable global sales and a service network and invested in a rental fleet of demolition attachments, said to be the largest in the Benelux and Germany.

The company works with professional demolition contractors that require powerful, fast and environmentally friendly attachments with less downtime. Wear parts for all attachments are replaceable, with all tools being made of Hardox 400 or ‘Hituf’steel. As for the future, Hydraram’s vision is to focus on ‘staying the best, not biggest’, as the company is a medium sized player in the demolition industry and focuses on quality and not quantity.