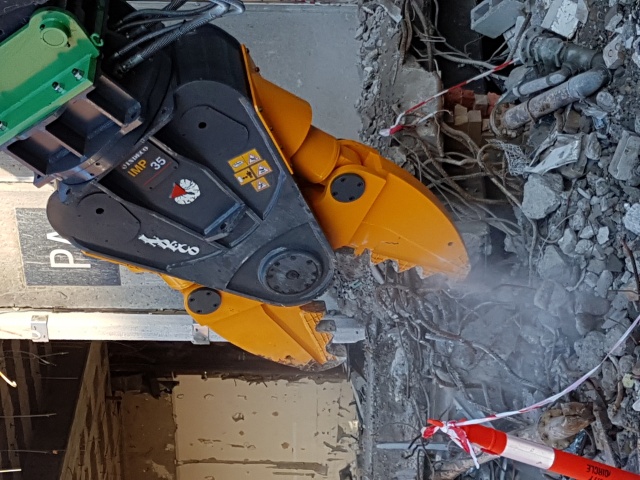 The ‘Metro Tunnel’, also known as the Melbourne Metro Rail Project, is a metropolitan rail infrastructure project that will make a significant difference to mobility in the city of Melbourne, Australia.

Work began in 2016, with 2017 seeing sections of Melbourne's Central Business District (or CBD) being closed for demolition work to make way for the construction of the tunnel and new stations.

This area includes City Square, where the CBD South Station known as Town Hall Station will be built, and where Indeco products were used to demolish buildings and underground parking to make room for the new station.

The demolition was entrusted to City Circle Demolition and Excavation, a Melbourne based company founded in 1981, specialising in excavations, demolition and recycling. Critical issues include the lack of space available and the noise limitations imposed in the Central Business District during working hours. The company therefore started off using small hammers and excavators to create the entrance, and thereafter using larger excavators equipped, according to the job at hand, either with an Indeco multiprocessor or with a hammer, working for about eight months on eight hour work shifts. City Circle became an Indeco customer in 2016 and since then has purchased several products from Indeco Australia, which has been supplying the local market since 1993.

The company’s fleet is currently made up of eight breakers, three of which are small (HP 150, HP 500, HP 700), three medium (HP 1200, HP 1500, HP 2500) and two large (HP 3500 and HP 7000), plus three multiprocessors (one IMP 15 in shear configuration, one IMP 35 and one IMP 45) and an IRP 29 X rotating pulveriser. “We are familiar with several Indeco products, their hammers, pulverisers, multiprocessors and shears,” says Peter and Tim Skidmore, respectively director and manager of City Circle Demolition and Excavation. “Indeco products are always good performers and guarantee excellent production. What’s more, their commercial and technical support are second to none, which is crucial when we have tight deadlines to meet.”