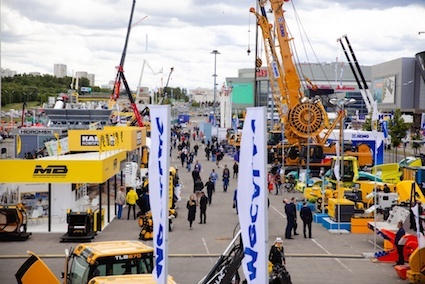 For the first time under its new name of ‘bauma CTT Russia’, the 19th international trade fair for construction equipment and technologies was held successfully from 5–8 June at the Crocus Expo IEC in Moscow, Russia. The event surpassed the previous year’s results in terms of visitor and exhibitor numbers.

A total of 586 exhibitors, an increase of 4% when compared to last year, from 26 countries, showcased their latest products and innovations aimed at the Russian and CIS market on 60,000m2 of exhibition space. The top ten exhibiting countries represented, in order, were Russia, China, Germany, Italy, Turkey, Finland, Spain, Korea, Belarus and Belgium, with four country pavilions from China, Finland, Germany and Italy respectively. The exhibition attracted 22,681 visitors (an increase of 10% on 2017) coming predominantly from Russia, Belarus, Kazakhstan and other CIS countries.  Stefan Rummel, managing director of Messe München, reflected on the highly favourable results: “The efforts we have undertaken to further increase the attractiveness of the trade show resulted in an increase not only in the number of professional visitors but in their quality too.”

The latter point was confirmed by some of the exhibitors. Mikhail Goncharov, marketing manager at Putzmeister, stated: “We had more professional visitors at our booth than last year.” Alexander Chirkov, commercial director of XCMG, adds: “After missing CTT last year, participating in this major international exhibition was a priority. All the equipment presented at our booth was sold to clients. We are going to take part again next year.” Engin Barutcuoğlu, export manager at Hidromek, commented: “We are satisfied with the results of the show. Next year we are going to double our space and present new models.”

The trade show also attracted officials from the Russian regional construction ministries, thus emphasizing its leading position for the industry in Russia and the CIS. “We are happy that through our work, and continuous exchange with regional authorities, we were able to welcome many of them at the show. In future, we plan not only to continue our work in this area, but even to extend it”, explains Andreas Lettl, general manager of CTT Expo LLC.

For this year’s exhibition, the largest construction industry event in Russia came up with a number of innovations which proved to be productive from the start. Shortening the duration of the trade fair from five to four days led to a greater concentration of visitors from the trade, which was much appreciated by the exhibitors. Also for the first time, a demonstration area was set up in the open air section where exhibitors such as AST (dealer for John Deere), Manitou, and RusBusinessauto (dealer for SDLG), to name but a few, presented their products in action. Roman Tolmachev, brand manager at Wacker Neuson,

said: “We greatly appreciated the idea of demonstrating the equipment live. We were able to highlight particular advantages of our machines; this is simply not possible in a static presentation on a regular stand.” Also at the open air area, WorldSkills, an international non-profit movement which aims to enhance the reputation of the professions, demonstrated the competence of young professionals in the disciplines of concrete construction, and maintenance of heavy equipment to a wide audience, with the companies Doka and Volvo CE providing materials and equipment.

New initiatives were also reflected in the supporting programme. A conference was held on ‘Construction equipment industry in transformation: drivers of success,’ by the Association of European Business (AEB). This brought high level speakers together from politics, associations, and key industry players such Caterpillar, JCB and Volvo CE. Trends and tendencies in the construction equipment market in the Russian Federation and Eurasia were also discussed, followed by presentations of innovative technologies designed for the future of the industry. The latter included unmanned technologies and electronic passport systems for self-propelled vehicles.

bauma CTT RUSSIA 2018 again received official support from various national authorities and professional unions. These included the State Duma Committee for Economic Policies, Industry, Innovative Development and Entrepreneurship; the Ministry of Construction, Housing and Utilities; the Russian Union of Builders; Moscow’s Department of Urban Development Policy; the Committee for Entrepreneurship in Construction, and the Chamber of Commerce and Industry of the Russian Federation. Additionally, and new this year, were the sponsors Sperbank, Russia’s leading bank, and the insurance company VSK.

The next bauma CTT Russia, the 20th annual show, is scheduled to take place at IEC Crocus Expo, Moscow 4-7 June 2019.