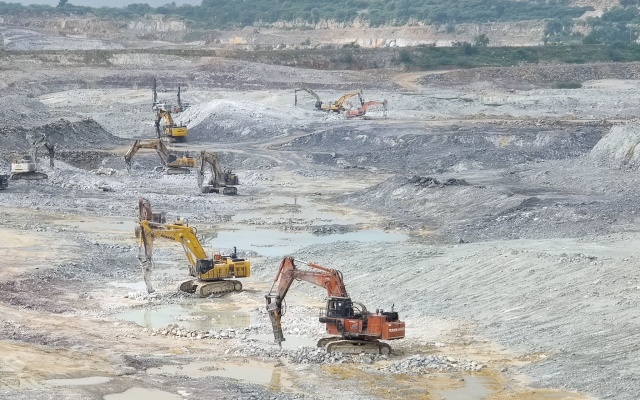 Birla Cements is home to the world´s largest fleet of giant HB 10000 heavy breakers. The company operates its 17 strong fleet at its limestone mining operations in Western India, with a comprehensive Epiroc maintenance contract and extensive spare parts inventory, ensuring that Birla’s breakers are up and running 24/7.

Headquartered in Kolkata, Birla Cements is part of the M.P. Birla Group, producing cement at seven locations in India with an annual total capacity of 15.5M/t. The company’s limestone mining operation is located in the state of Rajasthan, near the city of Chittogarh, which is home to the historic Chittor Fort.  Since the Chittor Fort is a UNESCO World Heritage site, no conventional mining activities are allowed within a radius of 10k. Therefore, Birla Cements opted for blast free mining using rig mounted heavy hydraulic breakers for primary rock excavation. For this purpose, it invested in 17 Epiroc HB 10000 heavy breakers with a further five on order.

Improvements make HB 10000 the ultimate choice for the job

In 2015 Birla Cements was looking for a reliable breaker which could work for 3,500h without major breakdowns. Epiroc introduced the company to the HB 10000, a machine known for its sheer breaking power which is generated in a single impact between piston and working tool corresponding to a weight force of around 760t, and with an impact frequency up to 380b/min. However, to optimise the HB 10000 for the specific task of primary rock excavation, the Birla Cements discussed certain upgrades with Epiroc’s design engineers. These included features such as double ‘ContiLube  II’ for enhanced lubrication, easy to fix split wear bushings and modified flange seals to withstand operating high temperatures. In addition, Epiroc´s patented ‘Intelligent Protection System’ (IPS), was also used to equip the breakers.

The terrain at the Chittogarh site comprises of compact strata, with compressive strength of 100-160mpa. The rig mounted hydraulic breakers work three shifts continuously with production at more than 15,000t/day.  Within the scope of Birla Cements’ comprehensive maintenance and spare parts contract, Epiroc is on hand around the clock to ensure trouble free operation. The contract includes repair and maintenance support to ensure availability and maintain productivity. Extensive aftermarket inventories are maintained at both the Birla site and at an Epiroc warehouse located nearby.

Jerry Andersson, general manager of Epiroc Mining India Limited said: “Our thanks to Birla Cements for recognising the true potential of our HB 10000 in their application. They were looking for blast free mining operations and the technical team here at Epiroc were happy to respond to their suggestions for optimising our equipment for the task. Excellent results are being achieved with our heavy hydraulic breakers, and we have developed a strong partnership with the customer. We will continue to monitor the pulse of their operations and adapt to their needs.”