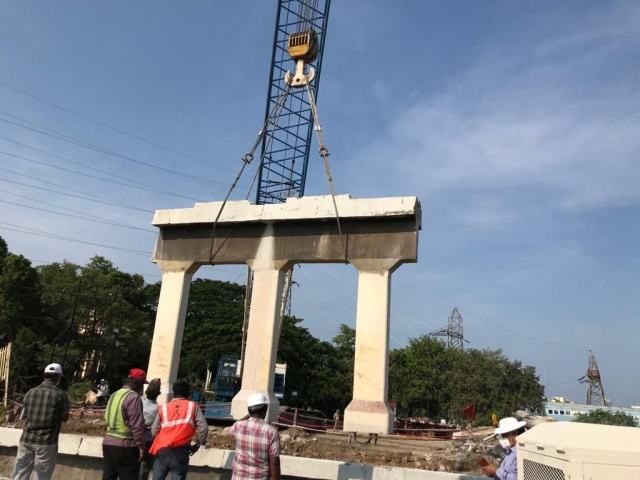 The 9R road over bridge in Chennai, India has been in the plan for demolition for more than 12 years. The outbreak of Covid-19 actually made it possible.

The 9R road overbridge (ROB), popularly known as ‘Elephant gate ROB’, is one of the most famous grade separators in Chennai, India, being located at the exit of Chennai central railway station connecting with the coaching depot, having been constructed in 1933. Southern Railway had been making and revising plans to expand the capacity of two railway stations by adding more lines for more than 12 years which would see the bridge removed. The plan however could not proceed because of various issues encountered by both Southern Railways and the Corporation of Chennai, mainly due to traffic congestion at the bridge during peak hours.

Southern Railway originally planned to have a line block and terminate all train’s departures and arrivals so as to facilitate the demolition of the bridge. The plan was to allot 72h window for the work to ensure minimum disruption to passenger train traffic. After considering the revenue loss due to disruption in the traffic, railway authorities were forced to consider other various options for demolition with minimum revenue loss. In the meantime, during March 2020 Covid-19 arose with the resulting lockdown being enforced throughout India. Southern Railway took advantage of the situation, deciding to demolish the bridge during the lockdown period.

This contract for the demolition of the 87 year old bridge was awarded to P.K. cutting Tech. Pvt. Ltd (PKCTPL) headed by Kannan Paulthurai (a founder and committee member  of IDA demolition association)  who has around 20 years of experience in the fields of demolition and retrofitting. PKCTPL has experience in working at nuclear/thermal power plants, refineries, stadiums, airports, bridges, water treatment plants, multi-story apartments, ‘industrials’, IT parks and many other structures. PKCTPL provides such services and expertise as the strengthening of old and new civil and mechanical structures, modifications and alteration by adopting advanced and modern technologies and utilising modern equipment. The latter includes heavy duty lifting equipment, diamond cutting systems, heavy demolition breakers, chippers and so forth. “We have well trained highly skilled man power to take up any kind of challenging job within the stipulated time frame with a sole motto of zero accident by adhering all safety rules and regulations,” says Paulthurai of his company’s attributes.

When the project was awarded to PKCTPL, railway authorities emphasised that it had to be completed within 10 days and that all workers had to strictly adhere to Covid-19 protocols, including social distancing. Furthermore, the use of heavy duty equipment and explosives were also prohibited. PKCTPL agreed to all the conditions, looking upon the demolition project as a ‘challenge’. The company also decided to use a diamond cutting system as the only viable option.

Taking advantage of the curfew enacted by the Indian Government (due to the Covid-19 lockdown), the railway authorities coordinated actions with PKCTPL and the Chennai Corporation in order  to demolish the bridge. 25 workers were deployed and it was a challenge to organise the necessary staff and equipment from various part of India during the lockdown as travel restrictions had been imposed throughout India. With the help of railway officials  and the Chennai Corporation, as well as the positive attitude displayed by the workers employed, these difficulties were overcome.

Using diamond cutting equipment, the cutting plan was prepared in accordance with the crane safe working load (SWL) receiving approval from the respective authorities. As per the cutting plan, the eight span bridge was split into two parts. Four spans comprised the first part and were dismantled from one end. After dismantling this section, all equipment, including a 250t crawler crane, had to be dismantled and moved to the other end of the bridge for the next four span section.

PKCTPL started as per cutting plan and undertook core drilling for providing slings for lifting purposes. By using a mobile ‘crack wire’ saw the company was able to keep on cutting the slab between piers in longitudinal directions (perpendicular to the track). Following this, the cut piece was lifted by the 250t crawler crane with the help of a sling and other lifting tools to be cut by the diamond cutting system simultaneously at each end. Once completed the cutting of first cut piece was lifted and loaded into a trailer directly being moved to a stock yard, with unloading being undertaken by a 220t telescopic crane.

Once the first piece was lifted to the stock yard, the crane was moved to hold the second piece with the same process being repeated to remove the entire span. Once two span dismantling was completed, the pier was cut with diamond cutting systems and lifted with the crane and moved to the stock yard by trailer. ”We were allowed to work maximum 10h per day with 25 workmen including engineers and supervisory staff. So we planned accordingly and used men and machinery at their maximum capacity and we ensured all machinery was continuously working maximum 10h without any break,” says Paulthurai. The cut piece size was 5m x 5m and weighed approximately 35t, with the total dismantled concrete weighing around 1,500t.

PKCTPL ensured high levels of safety throughout as well as the security of workers, machinery and any third party property such as rail and electric lines.  All relevant Covid-19 pandemic protocols were followed and adhered to as well as all relevant government regulations. No accident occurred during the demolition work which was completed within the time frame stipulated by Southern Railway officials.

The equipment used on the project comprised of a mobile track wire saw(120hp), two diamond wire saws (Hilti DLP32) as well as two Tyrolit PPH20 diamond wire saws and four diamond core drillers. On the more substantial side, a 250t crawler and a 220t telescopic crane along with three 60t trailers and a hydra.