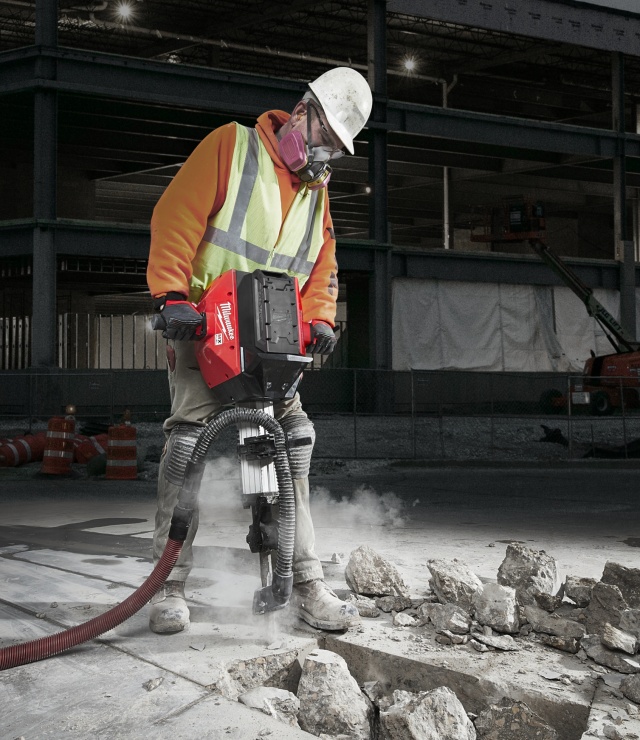 What the industry did not think would happen for several years has happened with the release of the world's first battery powered professional diamond core drilling, a full size power cutter for reinforced concrete and a powerful jack hammer.

Battery powered hand tools are basically dominating the construction site today. The development of the batteries has been rapid and they have become smaller and more powerful, safer with less risk of overheating with fire risk, being able to be charged to full strength in just under an hour.

Battery driven machines for the professionals
To date, batteries have only been suited for small tools, or so it was thought. Among the heavy duty users such as concrete cutters, demolition contractors, or those who work with heavy hand held cutting machines or chisel hammers, the prospects for battery operation and lighter machines were not hopeful. Professional concrete cutters and demolition contractors have perceived that it is virtually impossible to battery power professional core drill systems, full size power cutters and chiselling machinery. Batteries using current technology would be too big and heavy.

However, the manufacturer Milwaukee, owned by Techtronics Industries, has changed perceptions and at a major product launch event in Europe, a battery powered core drilling system was introduced. This is designed for core drilling with diamond tools in reinforced concrete up to a diameter of 150mm, and was launched along with a battery operated power cutter for blades with a diameter of 350mm and a battery operated chiselling machine. For geeky journalists in the construction industry this is a huge breakthrough, a real paradigm shift for battery power driven hand tools and machines.

New MX Fuel Series
A new and revolutionary series, Milwaukee MX Fuel, delivers many benefits including zero emission machines and includes a battery powered lighting mast along with a battery powered drainage machine. The series has no exhaust fumes, hassle starter cord and start up, gasoline/oil mixture or engine maintenance, yet provides the same power as gasoline and cord powered construction machines but with less weight. In addition, the equipment can be used indoors in enclosed spaces without the risk of fumes.

All machines in the MX Fuel Series are powered with the same battery, the ‘Max Fuel RedLithium’ battery. This has been patented with unique features such as protection against fall damage, vibration, water and extreme temperatures. The battery is equipped with ‘RedLink’ electronics that allow the battery, machine and charger to communicate with each other to create optimum performance and battery life. Its high performance and high quality lithium-ion technology has been developed in close collaboration with the world's leading battery cell developers and tested at Milwaukee Tools' own battery laboratory.

Milwaukee has two battery sizes for the MX Fuel Series with both batteries fitting all machines in the series. The largest, the MXF XC406 has a capacity of 6.0A/h and can be fully charged in 90min. It is equipped with battery indicator, RedLink technology and is compatible with Milwaukee's ‘One-Key’ system - a digital system to facilitate tracking, handling and customisation in the workplace. The smaller battery, the MXF CP203, has the same characteristics as the larger one and can be fully charged in 45min, with capacity of 3.0A/h as well as a MXF C charger. All products in the series are equipped with a carbon brushless ‘PowerState’ motor, RedLink Plus electronics and RedLithium batteries and are compatible with the One-Key system.

MXF COS350 MX Fuel 350mm power cutter
This is the world's first handheld battery operated power cutter for 350mm blades with enough power to cut reinforced concrete, starting in a few seconds, with cutting beginning immediately. Should something happen that risks the user's safety, such as the machine hitting the face, the ‘RapidStop’ function stops the blade immediately, with a blade guard cover preventing blade exposure. The machine has ‘petrol powered performance’ with a maximum speed of 5,350rpm and 125mm cutting depth. The machine is quiet with low vibrations and well balanced weight. It has a tool free burst cap and built in wet cut tubing compatible with Milwaukee's M18 ‘Switch Tank’ water spray tank, which is also battery operated with no pumping required. The machine is equipped with safety features that eliminate it from ‘hitting the face’ in the wrong use, simply switching off before anything happens. When the machine is switched off, the blade stops immediately and does not stand and spin as with a petrol powered cutter. It may be accompanied by Milwaukee’s recently launched new blade series trolley.

MXF DSD150 MX Fuel 150mm diamond drill
What is said to be the first battery powered diamond core drill system, which is capable of drilling holes up to 152mm, has also been introduced. This has a considerably shortened set up time, making core drilling so much easier. Performance is the same as for cord powered machines and drills both dry and wet, with the machine having two gears with laser etched speed and capacity markings on the metal housing. Speed ​​1 is for up to 75mm diameter wet and dry drilling at 1,600rpm, whilst Speed 2 is for between 76mm to 152mm drilling at 800rpm. The machine is equipped with an ‘Autostop’ clutch, which provides protection thereby preventing overstressing if the drill is stuck. Other features include a spirit level sensor, built in pressure gauge to optimise speed, built in battery indicator and built in stroke connection compatible with the M18 ‘Switch Tank’ with a battery powered water pump. The drill mount fits most core drills with a friction disk, enabling easy core drill replacement. The machine fits most drill racks, but Milwaukee has also developed its own, MXF DR255TV with a 60mm collar. All machines are equipped with carbon brushless motors, with an auto feed to be expected in the near future.

MXF DH2528H MX Fuel 25kg jackhammer
Milwaukee's new battery powered jackhammer provides high impact energy with lower vibrations than hammers with cord, gasoline or pneumatic power. The machine can handle 12m  of chiselling per charge, has a 28mm chisel and, according to Milwaukee, delivers the same power as gasoline, electric cord and compressed air driven machines. The hammer provides 64J impact energy and is well suited for tough demolition work, even indoors in confined spaces thanks to zero emissions. ‘Floating Body’ anti vibration technology makes it possible to work all day without being exposed to harmful vibrational damage. Its low vibrations of 5.17m/sec2 allow 7h of continuous productivity with the jackhammer delivering 1,300blows per/min being able to chisel up to 2t or a 12meter long (200mm deep and 300mm wide) chute on one MXF XC406 battery charge. The service life of the jackhammer corresponds to cord driven machines and is highly service friendly, with a service light indicating when grease should be added (every 40h or so).

MXF TL MX Fuel lighting mast
Effective and powerful lighting in the workplace is an obvious necessity on construction sites. There are a plethora of suppliers but many light sources are powered by diesel or gasoline and cannot be used indoors. Milwaukee's new battery operated lighting tower is lightweight and quickly set up in the workplace. It is equipped with ‘TrueView’ high definition light source for both directional and area lighting. The lamp elements can be adjusted in different directions, with the tower having high mobility with two large wheels and can handle tough going. Set up time is only a few seconds with the mast being able to be raised up to 3.10m and being able to withstand wind speeds of up to 55km/h.

And more news
Another new release is the battery operated concrete cap M18 FCOS230-0 which can be used with blades up to 230mm. Also new is the battery operated cutter/gear saw M18 FMS305-121, the diving gun M18 FN18GS-202X and the drill machine M18 ONEPD2-502X along with a new M18 ONESX-0 ‘tiger saw’, which Milwaukee was the first to launch, and new M18 ONESLS-0 plant lighting. Later in the year a number of other new battery powered machines will be launched.

Milwaukee in Sweden will exhibit at the Demcon fair in Stockholm in September, showing and demonstrating the new battery powered MX Fuel Series.