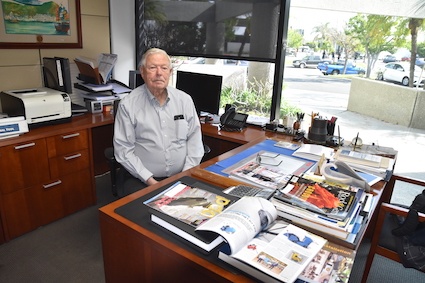 Diamond sawing and drilling is a relatively young industry where even established businesses can only trace their history back a hundred years or so at best. Unlike most everybody else, California based MK Diamond began its journey over 150 years ago. Founded in San Francisco in 1868 by Joseph Musto, a professional stonecutter of Italian origin, the company pledged an unwavering commitment to quality from day one. Today, a century and a half on, the US manufacturer continues to stand by that pledge. Andrei Bushmarin reports.

When you think of California, San Francisco and Los Angeles are the city names that spring to mind. As fate would have it, it is with these two great cities that the long story of MK Diamond has always been intertwined.

A tale of two cities and one company

The letters ‘M’ and ‘K’ in the company's title stand for the names of the Musto and Keenan families who were business associates in the San Francisco Bay area in the late 19th - early 20th century. In 1919, Joseph Musto's son, Clarence, came to Los Angeles with a view to developing new improved diamond blades. By mid-century, the ‘Musto-Keenan Company’ was a well-established player with a reputation for producing top quality diamond consumables for cutting marble and tiles. The next (and still ongoing) chapter in the company’s history began in 1977 when a Robert J. Delahaut came to work for MK Diamond as the vice president of sales.

A diamond in the rough

From 1956, Robert Delahaut cut his teeth in the diamond tooling industry while working for Norton Clipper Manufacturing in San Francisco, selling diamond blades and saws for cutting concrete and masonry. Working at Norton was an education, and a major stepping stone. By 1977, he became a well-known figure in the local business community, so when MK Diamond was looking to expand its sales force, it was Robert they targeted to head the sales operation. When Robert came on board, he redefined MK’s sales strategy by adding sawing and drilling machinery to the product offering. An experienced salesman, he understood the importance of brand recognition, which was a tough thing to achieve with just diamond consumables. The first machine ever manufactured by MK Diamond was the 101 tile saw, shortly followed by the 2001 masonry saw. The saws were such a success with end users that the company continues to produce both models to this day. In 1983, Robert Delahaut purchased MK Diamond and kept on steering it in the chosen direction.

Today MK Diamond is headquartered in Torrance, a city some 30km southwest of Downtown Los Angeles. The company owns a 4,460m2 building there, which also houses a factory. This is where all the sawing, drilling and surface preparation machines are manufactured and assembled. Of the 120 personnel MK Diamond currently employs, roughly half work in the plant. Five regional managers are responsible for national sales while Robert Delahaut and his son Brian handle international transactions. A retired US marine colonel who saw active service in Iraq, Brian joined the family business in 1990. Additionally a dedicated manager oversees the Mexican market where the company also maintains a warehouse. At the moment MK Diamond focuses on the North American market, with only 12% of output being sold outside the US. The domestic focus notwithstanding, the US manufacturer does supply its machines and tools to as many as 40 countries worldwide.

As a modern thinking company, MK Diamond is looking to develop a strong online footprint for its products. Towards this goal, it is working closely with many internet retailers, including such heavyweights as CPO Outlets. CPO is MK’s fastest growing online dealer, with the growth rate reaching 300% in the past two years. As important as the online side might be, MK still considers regular brick and mortar stores as the best opportunity to get to know the needs and preferences of its customers. Strong customer relations are also the reason why MK Diamond is very focused on the rental market, as this is where users go to try first and eventually buy new products. Rental equipment now accounts for some 23% of MK’s total business. The manufacturer is a member of the CRA (California Rental Association) and the ARA (American Rental Association) and a staple exhibitor at the associations’ trade shows.

Even though diamond consumables still generate some 35%-40% of the turnover, it is sawing and surface preparation machinery that MK Diamond now concentrates on. In the tile saw segment, for example, the manufacturer has practically cornered the US market, with Dewalt being the only serious competitor to the Californian manufacturer. The ‘Soff-Cut /Early Entry’ saw is rapidly becoming very popular with professional contractors who see it as a viable alternative to Husqvarna’s ‘Soff-Cut’ saw for green concrete applications. MK’s machines offer an improved anti vibration base, operator handle controls, and the only over centre vacuum pick up attachment available at present. Featuring a triangle arbour, the saws come complete with a stainless steel skid plate as standard.

According to Brian Delahaut, the North American market continues to be a challenging place as distributors and rental yards continue to consolidate, forcing smaller players out of business, with industry regulations influencing to a large degree product specifications. Thus, new OSHA requirements for silica dust reduction have become a major part of MK saw designs. The manufacturer has recently re-engineered its proven BX-3 masonry saw to have a wet cutting option, and all new machines now feature a vacuum port for dry cutting. New dry cutting dustless products are also in the pipeline, along with alternative fuel options. Just a month ago, the manufacturer introduced the brand new propane fuelled concrete saw , MK-3000. MK Diamond’s short to mid-term goals are to launch three to five new products per year, and to further expand the content provided to customers on each model. It aims to be a customer centric company that identifies the challenges faced and the needs of each client in an efficient manner, offering them the best possible solution.