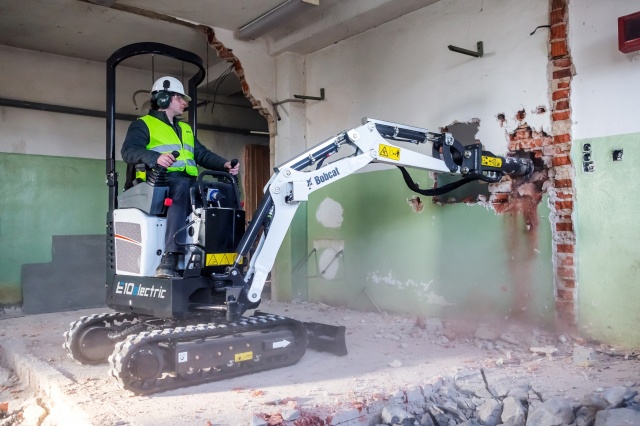 Doosan Bobcat has officially announced the inauguration and commencement of operations at the company’s first manufacturing facility in India in the Tamil Nadu state, located in the outskirts of Chennai.

Set up with a planned investment of €24M over the next five years, the state of the art plant is spread across an area of 8.74ha and has an annual production capacity of 8,000 units. It is an integrated facility with fabrication, warehouse, assembly and paint shop all under one roof. It will initially be manufacturing Bobcat backhoe loaders completely designed and developed by the engineering team based in Chennai. This is a new addition to the existing product portfolio of Bobcat in India that currently comprises of several skid steer loader and mini excavator models.

“This new facility will help to meet the increasing demand for backhoe loaders to support the development of India’s infrastructure and construction segment. India is one of the key markets for Doosan Bobcat to maintain global leadership in the compact segment of the market. By opening the new factory in India, Doosan Bobcat has taken the next step forward to expanding its global presence and growth strategy. This facility represents our long term commitment to Indian customers, employees and business associates in the nation through development of vendors, promotion of local parts procurement, technology transfer and export,” said Scott Park, chief executive of Doosan Bobcat Global.

India is the world's second most populous country and one of the fastest growing economies in the world. India’s compact equipment market is the third largest in the world after the US and China, with an estimated worth of over €1B. The market demand for compact construction equipment is growing rapidly due to the Indian government’s policy of developing the national infrastructure including roads and railways among other things, combined with rising labour costs across the country.  The Indian backhoe loader market, which accounts for 80% of the country’s entire compact construction equipment market, is the largest in the world. Since 2014, the Indian backhoe loader market has grown at an average annual rate of 9.7%.

With the backhoe loaders produced at the Chennai plant, Doosan Bobcat is aiming to become the No. 3 player in the Indian backhoe loader market within three years. The company also plans to make this facility a global manufacturing hub for export to other countries and a regional centre of excellence. In addition to backhoe loaders, the company is also looking at localising its other compact products to better suit Indian market requirements. “Of all the emerging economies, India is the key market, showing the most prominent growth pattern fuelled by investment increases in various types of infrastructure across the country. We plan to use the Chennai Plant as our global production base for backhoe loaders and boost their sales around the world and in the Middle East, Africa and Southeast Asia in particular,” Scott Park added:

Doosan Bobcat plans to make every effort necessary to expand its presence in India’s compact construction equipment market. To that end, Doosan Bobcat aims to establish 25 dealerships and 65 sales networks throughout India by the end of 2019, and to further increase the number of sales networks to 200 by 2024.