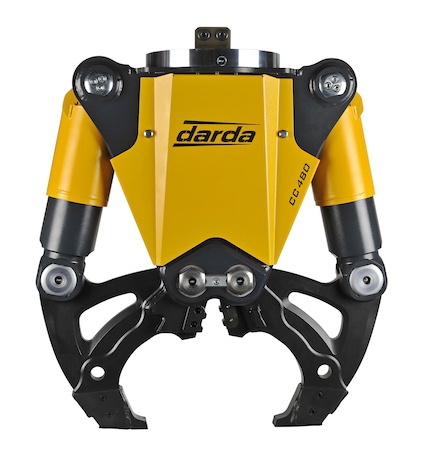 Parallel to the launch of new robots by Brokk, its German subsidiary, Darda GmbH, is presenting three new crusher models at bauma 2019. They are designed as a low noise, yet powerful attachment tool for the new demolition robot series and for mini excavators in the 2.5t to 9t class.

The new Darda CC440, CC480 and CC580 crushers come in a modern, uniform design being both rugged and high performance. “The focus of the new designs was on an even higher power-performance ratio, a uniform design and even greater ruggedness, as well as new crushing tips for the two larger crushers,” says Darda engineering and design manager, Mathias Reichmann. In technical terms, they are equipped with a completely new type of pressure booster, which translates into speed and even higher crushing forces. All crushers retain their proven options, such as additional crushing teeth or full 360° hydraulic rotation.

The use of low noise concrete crushers as an alternative to hydraulic breakers is becoming more prevalent due to the high noise generation often generated by breakers. Health and safety regulations concerning noise, as well as the vibration risks caused by hydraulic breakers, have led to demolition contractors adopting other methodologies such as the Darda crushers. The use of a concrete crusher in combination with a mini excavator offers an attractive alternative to usual methods, with a concrete crusher providing greater levels of safety and comfort for the operator as there is no need to chisel away the floor often beneath the operators’ feet. Noise and vibrations levels have also been reduced, which together with other factors, have resulted in operators and contractors benefitting from the attributes of a  Darda concrete crusher when used in conjunction with an electro hydraulic, remote controlled Brokk demolition robot.

Darda has worked with Brokk for over 20 years, initially acting as the exclusive distributors for Brokk in Germany and Austria prior to being acquired by the Swedish manufacturer.  The combination of Darda and Brokk equipment is able to deal with strong, reinforced concrete structures such as elevator shafts, piers, concrete walls and ceilings, enabling them to be dismantled efficiently and in an environmentally friendly manner.