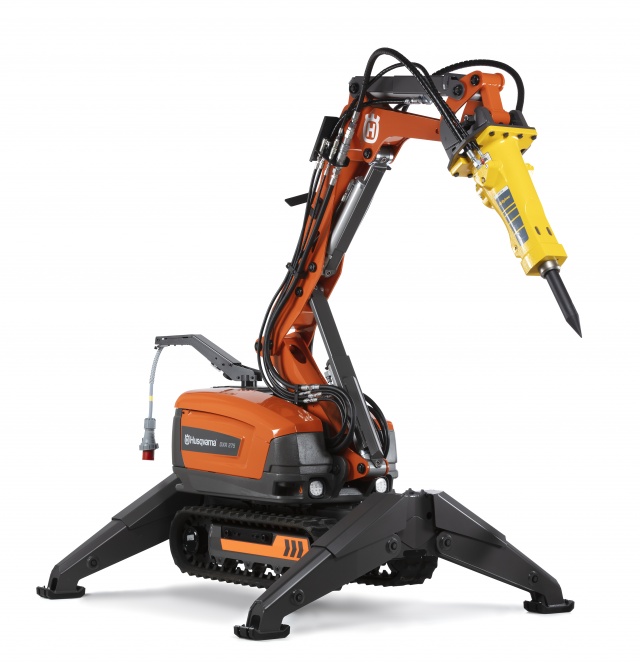 The four new models, DXR 145, DXR 275, DXR 305 and DXR 315, are said to deliver on average 20% more capacity than their predecessors. Fredrik Linnell, demolition director, who is responsible for Husqvarna's robots, says that the new models entail a total redefinition of the entrepreneur's potential in the workplace. “The four new demolition machines from Husqvarna offer a completely new user experience and better productivity for the operators,” he says.

What Husqvarna has taken on board in the development work of the new demolition robots is to fully expand and optimise the operator's potential. “The idea was to design technology that develops the operator's skills. With our new robots, we have created solutions that make work smarter, safer and with significantly higher performance. But you also get much more than performance. With these robots, the operator will experience control like never before,” says Linnell.

The four new models have been equipped with a control system with high reliability through improved precision and safer operation. A new remote control gives the operator significantly more freedom and total control over the demolition robot, even at an enhanced distance of 300m, through a 2.4GHz radio link. The remote control provides real time operation monitoring, including machine status, how long it has been running, oil level, temperature and much more. The operator can see incoming current and voltage per phase, temperature as well as active faults and operating time without the need for external measuring equipment.

Other features include a new, larger and more advanced LCD screen that provides a simple user experience and control with intuitive functions, an optimised viewing angle which quickly adapts to light and dark environments and three different transport modes. The joysticks have been equipped with thumb controls that enable manoeuvring where each operator can adapt the functions to their own wishes and work pattern, which provides a unique individual driving experience with greater flexibility, precision and efficiency. Ergonomics have also been considered when the new remote control was developed, with the operator being able to choose between a belt or ergonomic harness.

The new robots' electrical power has increased by more than 20% on average when compared to the models they replace. The hydraulic flow has been increased by more than 10% percent for the DXR 275, DXR 305 and DXR 315. In short, the increase enables faster cutting, crushing and breaking, which results in the job being performed faster. The machines' performance and power are automatically optimised under all working conditions, which means that the operator can work efficiently even in demanding and hot environments. In addition, all models are third party certified in terms of machine safety, EMC and functional machine safety.

It is often said that a demolition robot does the work of several excavators. Husqvarna claims that the new DXR 305 has a production capacity equivalent to three excavators, but with significantly more flexibility. Again, according to Husqvarna, with its raw power and precision, a DXR and an operator can surpass most of the structures seen in demolition workplaces. In addition, a DXR robot is much more compact than an excavator in the same weight class, more weight balanced, which enables, for example, demolition work in very tight spaces.

Other general advantages provided by Husqvarna's four new demolition robots are that they have an optimised ratio between power and weight as well as very good balance and stability. All arm and outrigger cylinders have complete individual control and all hydraulic parameters are easily adjusted. The machines have also been designed to be easy to service with clear easily accessible service points. Tensioning of the tracks takes place hydraulically, with error messages being clearly shown on the display in several different languages. There is also a clear diagnosis of the remote control.

Security at the centre

One of the really big advantages of a remote controlled demolition robot is that the operator can manoeuvre the robot at a safe distance without the risk of being hit by falling debris or damaged by weak ground. With the new control system and remote monitoring, Husqvarna has taken this a step further by expanding the remote connection option to a full 300m. This will be particularly appreciated in various industrial environments or sensitive demolition environments. The operator can thus stay at a safe distance in environments where there is a risk of structures collapsing, where there is a lot of smoke or dust or strong heat generation etc.

The new robots also have a wide range of specially adapted tools such as buckets, hydraulic hammers, rotary cutters, rakes and sorting grippers, as well as Husqvarna's own steel scissors and demolition scissors. The latest DXR software automatically adjusts the flow and pressure of these tools, whilst tools from other manufacturers require a simple manual adjustment. The machines come with a number of accessory packages that are factory assembled when ordering. These include an extra hydraulic function and cylinder protection, an extended cooling package and heat protection package. Other accessory kits comprise of drainage kits, dust reduction kits, waist belts and counterweights.

Another security measure worth mentioning is that Husqvarna offers a global service and support organisation to support the user. This includes service and repairs, spare parts and accessories, software support, Husqvarna ‘UpCare’, financing solutions and help with developing the contractor's business. Husqvarna's four new demolition robots will be demonstrated in various ways in 2022 and, of course, at a number of fairs around the world, including the Scandinavian demolition fair Demcon. During the spring, the robots will be available for demonstrations and test driving at Husqvarna's Experience Center in Söderköping.