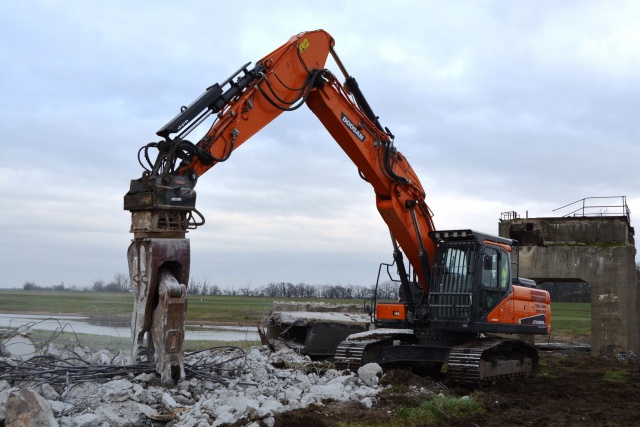 Tilo Süptitz Transporte e.K., based in Roitzsch in Germany, specialises in earthworks, demolition and transport.

For the more demanding tasks, owner, Tilo Süptitz, mainly relies on Doosan wheeled and crawler excavators, as was seen during the demolition of a pipe bridge crossing in Torgau. Here the company carried out the work using its new Doosan DX255LC-5 narrow track excavator.

The pipe bridge crossing in Torgau was built to carry a pipe that connected a former Elbe jetty across the meadows to the main pipeline on the Elbe dam. It spanned the Elbe meadows at a height of around 100m at a flood safe height. The Elbe pier had not been used for a long time and as a result, the bridge was removed by Tilo Süptitz and his team using the Doosan DX255LC-5 excavator, with the difficult access to the bridge for the excavator and trucks being a particular challenge to overcome. The company transported around 600m³ of concrete using its own trucks which took the debris away for processing.

The DX225LC-5 performed excellently, its powerful extension arm combined with the high level of stability ensuring that work progressed quickly and was completed on schedule after two weeks of work. The excavator was used for almost all the work, as in addition to the actual demolition of the bridge, it also included demolition of the foundations, pulverising the concrete and loading the trucks. In addition to a bucket, a 1.9t hydraulic hammer and a roughly 2t pulveriser attachment were used.

The Doosan DX255LC-5 used by Süptitz uses the proven water cooled Doosan DL06P six cylinder diesel engine with turbocharger. The DL06P engine delivers 141kW of power at a speed of 1,900 rpm. The cab on the DX255LC-5 offers the operator outstanding driving comfort and a high level of user friendliness. The jog shuttle switch, used on all new generation Doosan excavators, and a new system that can be used to operate attachments either via a joystick or a two way pedal, are also on board. This is particularly useful in demolition when precision is required enabling the driver to keep full control of the excavator with the joystick while simultaneously controlling the attachments via the two way pedal.

Tilo Süptitz Transporte e.K., offers its customers services in the areas of transport and trade in building materials, demolition, earthmoving, processing, construction debris recycling and mobile cranes. The 20 employees can access a fleet consisting of various trucks, modern screening and crushing plants, various types of excavators, wheel loaders and a variety of attachments such as chisels, scissors, hammers and pulverisers.

Tilo Süptitz has worked with the dealer, Doosan Ziesmann, for around 28 years. Eight years ago, he opted for a Doosan excavator for the first time and has not looked back since. In addition to the DX255LC-5, his fleet also includes a DX225LC-3 crawler excavator and a DX170W-3 wheeled excavator. Tilo Süptitz commented: “The Doosan machines are very reliable. We have exchanged all of them with new machines over the last eight years and the long term experiences are extremely good. At the same time, we also use Doosan machines from the Ziesmann rental fleet. The service is excellent and Roland Ziesmann always makes himself available for us. In Ziesmann, we found a reliable partner which works with us on an equal footing.” As stated, in addition to the three Doosan machines he owns, Tilo Süptitz regularly uses Doosan machines from the rental fleet of Ziesmann Baugeräte GmbH. The good service from Ziesmann as well as the high performance and reliability of the Doosan machines represent an optimal combination for him.