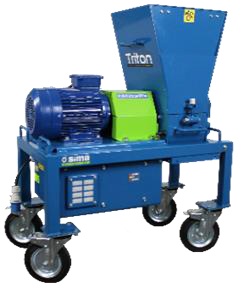 Sima has unveiled some new developments in 2021 including an upgrade of its Triton rubble crusher which is designed to reduce the volume of the debris produced during refurbishing works by up to a third of the original volume.

The resulting material can also often be used (after separating plastic, metal and gypsum) to produce a new mortar. A ‘Tronic’ development has also been unveiled for programming heavy duty bending tasks requiring different bending angles. Programming can be performed from the screen stand supplied as an option or from the user’s mobile smartphone or tablet. Furthermore, a new bench which has a side to support rebar bunches and a rolling half has been launched.

The new ISO EN 19085, in force in the EC and coming to force in Spain from September 2022, has inspired the development of the new Eurotron Smart, which fully complies with the new directive.  It also has a side extension system designed to increase machine functionality, allowing the user to cut wood planks up to 3m long. Based on the success of the 1,300mm length version, the ‘Keramax’ 160 has been developed to cut large porcelain slabs. The new ‘Magnum’ 700 and 1000L are large block cutters with improved features. These include a new electric motor in accordance with the IE3 directive, lifting eye located under the chassis, new removable water tray and a new switch to improve this already reliable machine. Specifically for the Keramax, ‘Venus’ and ‘Perlanato’ series, new tables offering extra surface area for handling the slabs to be cut have been introduced, making it easier to handle everyday larger ceramic panels.

A new version of the Polypanel 400 has been introduced specially designed for cutting SIP panels (such as sandwich panels). This machine is fitted with a 400mm Ø blade that improves the cutting depth to 125mm. A powerful 3600W vacuum cleaner is the perfect complement to this specialised machine range, whilst a new roller feeding bench has been created to use with the Polypanel machines. In order to assist with the increasing need for optic fibre installations in urban areas, the Cobra 45 Vario has been introduced. This is used to open small trenches, causing minimum damage to the infrastructure, allowing cutting lines of 50mm or 100mm wide. It can be fitted with two of three blades on one side to adapt to the size and features of the trench to open.

The Sima ‘Handy’ model is a portable block saw able to cut up to 10mm deep blocks. Designed for dry cutting, it can also be used for wet cutting if required. In both cases, its new bench makes the operation much easier. It is also available with an optional ‘Inclinemeter’ which can be fitted to any table saw to ensure full horizontality of the machine. Finally, the ‘Laser Class 2’ is now available for the Eurotron and Polypanel series to provide a clear cutting line to perform perfect cuttings of large pieces.