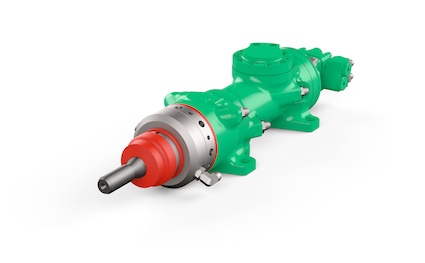 During Intermat this year, Montabert will introduce two new heavy rock breakers : the V6000 and the V7000. These two rock breakers, respectively weighting 6 tons and 7 tons, will complete Montabert’s range, to equip up to 120 tons carriers.

Innovation always drives Montabert design ; therefore, three patents have been filed for these two new breakers. The first one is related to the hydraulic cushion and piston centering. The two others are linked to the new variable energy adjustment system : like many other Montabert breakers, the V6000 and the V7000 are able to adapt their striking energy to the hardness of the rock.

Other new technologies have been included in the design of these two breakers, like the dual lubrication circuit. The “classic” features are also built in : swivels, pressurization, housing with reinforced steel… Moreover, these breakers have been specifically engineered to provide ergonomics and safety for the operator and the people working close to the breakers. Wear parts are easy to change, and have been designed keeping in mind weight limitations and efforts for field technicians. Noise levels have also been reduced to their minimum levels, using a fully soundproofed housing.

The two models will be shown during Intermat, from the 23rd to the 28th of April, on Montabert’s booth (hall 5B, stand P044).