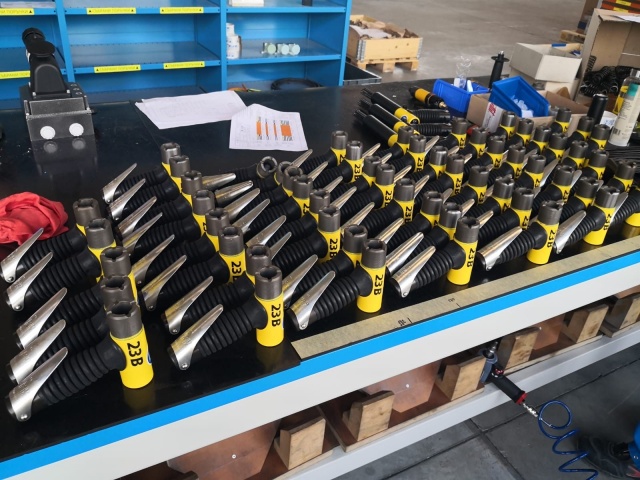 Von Arx surface preparation machines for concrete and asphalt have an excellent reputation all over the world. The well-established brand was founded by Paul Von Arx from Switzerland, and acquired by the American company Emerson in the beginning of the century. In 2019 ownership has returned to Europe, to Fredrik Åkermark, who for many years worked as global sales manager for Pullman-Ermator.

The name Von Arx carries certain expectations for anyone working in surface preparation. The company was founded in 1941 by the inventor Paul Von Arx in the Swiss town of Sissach near Basel. Paul Von Arx is known for developing a range of different products having over 100 patents. Von Arx is mostly known for surface preparation machinery for concrete and asphalt, but also for handheld pneumatic tools, such as pneumatic scabblers, needle scalers and chisel hammers. The company and the brand stand for very high quality in terms of the products themselves, service and lifespan. The products have been sold all over the world for a long time, and in Sweden, the company Epox Maskin, has been the distributor for Von Arx since 1997. Lately, an agreement has been made with the Finnish company Machinery Oy which covers distribution in Finland, Estonia and Latvia.

A journey out of the ordinary

In the beginning of the 2000s, Von Arx was sold to the American company Emerson from St. Louis, Missouri, and was included in Ridgid Emerson’s Ridge Tool Division. In 2019 ownership was transferred to the Swedish company Von Arx Sweden. The CEO of the company is none other than Fredrik Åkermark, who many in the industry will associate from his time with Pullman-Ermator. Fredrik has undertaken an impressive journey over the decades with things beginning at Bevaclean, which acquired Pullman’s businesses outside of the United States and later Ermator from Gällö, Sweden. Further on, this company began collaborating with the American company Pullman-Holt and launched Ermator in the United States. The collaboration eventually led to the taking over of Pullman-Holt’s business with the Ermator brand being strengthened in the American market.

As a result of this change, Fredrik and his family moved to the United States to lead the business, living in the United States for eleven years. Fredrik worked from 1994 to 2017 as Pullman-Ermator’s global sales manager. As many in the industry will be aware, Husqvarna Construction Products acquired Pullman-Ermator in 2017 which saw Fredrik working at Husqvarna as global business development manager for dust and slurry and surface preparation. “We had an incredible journey of development with Pullman for many years and (continued) even under the ownership of Husqvarna,” says Fredrik Åkermark. When working in the same industry for many years, familiarity develops which has enabled Fredrik to build up a large network. Thus when Von Arx was put up for sale, he couldn’t let the opportunity pass. “This suited me perfectly. The company has many nice products with a high reputation all over the world,” says Fredrik.

The move from Switzerland to Bulgaria

Initially it was a tough start but Fredrik and his colleagues are used to challenges. The entire Von Arx business moved from Switzerland to the city of Plovdiv in Bulgaria. Plovdiv is an industrial city, geographically located more or less in the centre of the country, being located on a flat area between two northern and southern mountain ranges. Since the move, the company has recruited new teams for product development, production and administration. “The work with moving the entire business delayed our production slightly, which caused some delivery delays to our distributors. But we have a very good sales growth which initially led to some growing pains in the company,” says Fredrik. Today, the company has 20 employees in Plovdiv and sales have developed. Deliveries have caught up much thanks to the skilled co-workers with all employees growing into their work tasks with all welding, bending and machine pressing being carried out in the factory in Plovdiv. “We build new experience every day,” Fredrik states.

Von Arx milling drums are well known for their world class quality, and besides manufacturing milling drums for their own machines, the company also manufactures them for competitors and colleagues in the industry. Some of the cutting tools are manufactured in house, while some are purchased from external, high quality manufacturers in Europe.

What is currently being worked on is the further development of a network of distributors. Fredrik stated that even if Von Arx is a global and well-known brand, there are still many markets where the company has no representation and where there is room for major growth. The United States is one such market with the company recently making distribution appointments. Other markets with excellent potential are South Africa, Spain, Portugal, Poland, Croatia, Slovenia and Mexico. In around six to seven countries, the company is soon to begin distribution of its products. “Choosing the right distributor is incredibly important, that’s something we’ve learnt after all the years at Pullman-Ermator. A high level of service and support are very important factors for a good distributor,” Fredrik stresses.

In terms of products, the current Von Arx range consists of six basic models of surface preparation machines, VA10L, FR200, VA25S, VA30S, VA30SH and DTF25SH. Three pneumatic tools series will be added to this. “Our entire product development department today are working with developing and improving our current product ranges and customising them for more applications. We also work with a couple of entirely new products which we hope to present in the beginning of 2021,” says Fredrik. The long term business plan is to widen the product range even more and the company is not adverse to the idea of acquiring other players that manufacture quality products in concrete preparation and associated equipment. In other words, Von Arx with its new ownership, sees exciting developments and future.

PDi will feature Von Arx in the magazine in a future issue, and from an editorial perspective, you never ceased to be amazed by developments within the industry. Just as it seems that many smaller companies are being acquired by major players, the industry always seems to find new ways for developing and keeping going on.